When Rich Anti-Tax Donors Flee for Mars, Republican Candidates are Left to Flail Alone on Earth 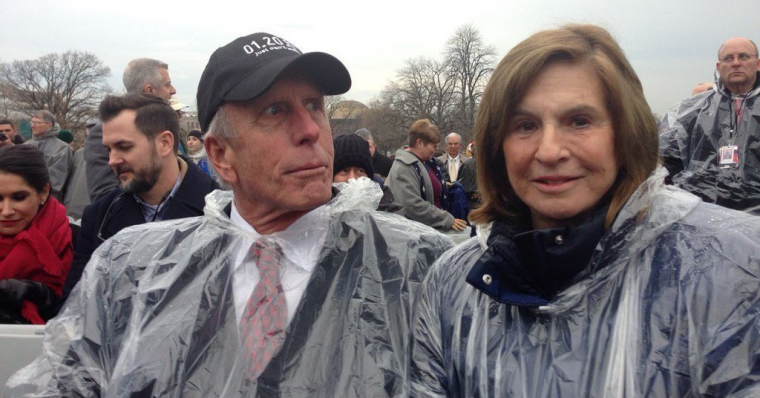 Conservative donor Richard Uihlein and his wife, Liz, preparing for their maiden voyage

Republican Lawrence Oliver of Dorsey has filed to run against Representative Avery Bourne (R-Morrisonville) in the March primary. Oliver has not yet reported raising any money, but his main issue appears to be Representative Bourne's vote for the 19-cents-per-gallon gas tax-hike to fund infrastructure projects during the past spring legislative session.

Dorsey's primary challenge is not really news. He has slim to no chance of even getting close to the popular Republican incumbent.

What is different, and therefore newsworthy, is that Bourne would have surely faced a far more viable and well-funded opponent in the recent past if she'd sided with the majority Democratic Party to double the state's Motor Fuel Tax.

For the past few election cycles, pressure from powerful and/or well-funded groups and individuals would've scared any Republican incumbent away from such votes.

But former Governor Bruce Rauner and his vindictive checking account have faded into the sunset. The multi-million-dollar money pipeline from wealthy Republican activist Richard Uihlein to Dan Proft's Liberty Principles PAC has been shut off. And, except for the $2 million he gave Bill Daley to run for mayor of Chicago earlier this year, Illinois' richest resident Ken Griffin has been mostly quiet.

Those three men contributed over $200 million to campaigns since late 2013. That's a whole lot of cash to put the fear into anyone who crosses them. And it's why almost all of the Republicans who voted for the 2017 tax-hike and the override of Rauner's veto decided not to run again, lest they be primaried to death. But those rich folks are mainly on the sidelines today.

As a result, neither the House nor Senate Republican caucuses are experiencing any major backlash over the fact that large numbers of their members voted to raise taxes.

Representative Terri Bryant (R-Murphysboro) voted for the gas tax hike and is running unopposed for state Senate. Springfield Republican Representatives Tim Butler and Mike Murphy were two more "Yes" votes who are unopposed for reelection. Representative Tom Demmer (R-Dixon) has a general election opponent, but no GOP opposition. The same goes for Representatives. Deanne Mazzochi (R-Elmhurst), Jeff Keicher (R-Sycamore), and others in the House as well as the Senate.

There was much grinding of teeth from the usual suspects when those tax hikes passed both chambers by wide bipartisan margins, but no "natural" groundswell of anti-tax opposition developed against Republicans who voted to fund the massive infrastructure plan to the point of people actually running against them. And the small number of people who did run weren't exactly burning up the fundraising circuit.

Representative Dan Brady (R-Bloomington) voted to increase taxes to fund infrastructure programs this year, so it could be an issue in his primary. But it's not going to be much of a primary if his opponent, David Paul Blumenshine (R-Normal), doesn't start raising money. Blumenshine reported bringing in $350 during the third quarter, loaning $1,100 to his campaign committee, spending about $4,500 on unitemized expenditures, and ending the quarter in the hole by about $2,900. Democrat Chemberly Cummings has also filed to run. President Trump only won this district by 1.25 percentage points in 2016, so it's possible this college-town race could eventually be in play, even though Brady has consistently won by large amounts.

Representative Dave Severin (R-Benton) is facing off against Tim Arview (R-West Frankfort). Representative Severin voted for the tax hikes to fund the state's new infrastructure program, including doubling the Motor Fuel Tax, and Arview has taken him to task for it. Arview told a local paper that he ran partly because of Representative Severin's tax votes and also because God had spoken to him. Arview is an independent insurance agent.  Like many of the other gas-tax opponents, he has not yet reported any campaign contributions. In fact, he hasn't filed any campaign-finance paperwork at all as this is written. President Trump won the district by 43 points, so no Democrats have filed.

The races where you are seeing sharp disagreement over the tax hikes are mainly in general election contests. For instance, Travis Breeden (R-Utica) has already repeatedly criticized freshman Representative Lance Yednock (D-Ottawa) for his "Yes" vote to increase the Motor Fuel Tax. Then again, Representative Sue Scherer (D-Decatur) voted for the tax hikes and is so far running unopposed for the first time ever.

What we've discovered is that when ultra-rich, anti-tax activists sit on the sidelines after a tax increase, few if any viable Republican protest candidates emerge on their own.