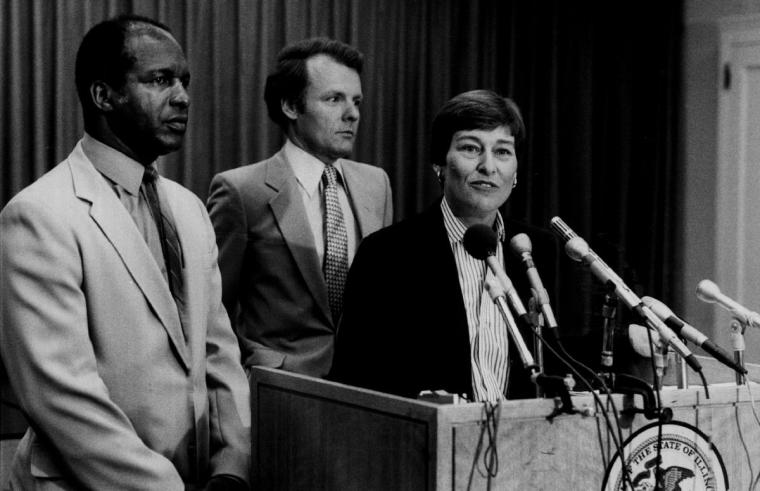 Way back in 1996, I spent a few minutes walking around the Chicago-based Democratic National Convention with then-House Minority Leader Michael Madigan.

Madigan at the time was working to regain his chamber’s majority after the 1994 national Republican wave, combined with the Republican-drawn legislative district maps, to knock the Speaker’s gavel out of his hand. But even with his lessened official status, Madigan was still hugely powerful within his party, and he was clever enough that many figured he’d somehow find a way back.

At some point that evening, Cook County Recorder of Deeds Jesse White approached Madigan. White had served eighteen years in the House with Madigan, so the two knew each other well.

White told Madigan that he was seriously considering running for secretary of state. Madigan was polite but non-committal in response.

After White walked away, Madigan turned to me, chuckled, shook his head no, and sighed, “Jesse.” He clearly had other plans for the office, which had been held by the Republican Party for fifteen years by that time and was likely to be an open seat if incumbent George Ryan did as expected and ran for governor.

Long story short, Madigan ended up supporting Tim McCarthy, a former Secret Service agent who took a bullet to his chest while protecting President Ronald Reagan during a 1981 assassination attempt. White ended up winning the 1998 Democratic primary by thirteen points. Madigan, by then the House Speaker, brought a large campaign check to his first post-primary meeting with the winner and supported White from that point on.

White went on to win the 1998 general election against former state Representative Al Salvi, whose spouse Kathy is currently running for US Senate, by thirteen points.

From that election forward, Jesse White became a singularly-unifying force in Illinois politics. He routinely managed to win areas where no other Democrat could even hope to compete. In 2002, he won all 102 Illinois counties, raking in 68 percent of the vote and cementing his legendary status. He won 63 percent of the vote four years later, then won subsequent elections with 70, 66, and 68 percent.

A determined worker, White had gone all-out to defeat Madigan’s candidate in 1998, campaigning everywhere, and he was not happy that he lost a few counties in 2006 after sweeping them four years earlier, so he made sure to ramp up his efforts in 2010.

Over six elections, White outpolled his party’s candidate for governor by an average of 13.8 percentage points.

In 2018, he lost just two of Illinois’ 59 state Senate districts, according to the Illinois Elections Data website.

Nobody has ever tried to quantify White’s impact on down-ballot races. Did crossing over for White help nudge Republican-leaning voters to maybe support a Democrat for the legislature or local office? There’s no data to prove such a hypothesis, but I gotta figure he helped, and nobody can ever doubt that White has been a strong net-positive for his party. And when his preferred candidate to replace him as Secretary of State failed after innumerable problems were exposed with how she has run her current Chicago office, the Democratic nominee Alexi Giannoulias was quick to embrace the longtime incumbent White, knowing he’ll be an asset in the fall campaign.

When White leaves office in January, I just don’t see how we’ll ever see another politician like him. His appeal not only crosses party lines, but he showed Madigan and others in 1998 that people of all colors and origins would eagerly support him.

In 1998, I wrote that White was an American hero, and predicted Illinois voters would pick up on that. He recruited kids out of neighborhoods that many folks are afraid to even drive through to his eponymous Tumblers team and helped shape them into solid citizens. He’s run that team since 1959, and over all those decades, only a tiny handful have ever had serious trouble with the law. His fellow party-members aren’t the only ones who owe him a debt of gratitude.

White’s retirement may or may not make a difference for Democrats on election day going forward. As I said above, we simply don’t know what actual impact his huge wins have had on other races.

What we do know is that we are losing an elected official whose consistently-unifying appeal has no equal in this state’s politics. And we will be the lesser for that loss.