Why Are State-Government Watchdogs Obsessed by a Governor’s Thrift? 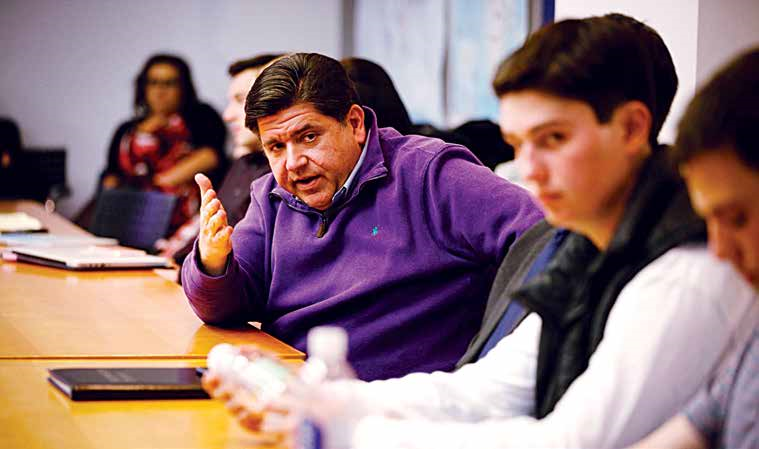 It's a good bet that the billionaire Pritzker paid for the plane that took him and whatever staff he brought to the various venues, since he's regularly done that since taking office in January. The state hasn't had an appropriation to pay to operate its fleet of aircraft since Governor Bruce Rauner halted their use during a long period of political gridlock.

Illinois is close to 400 miles long and over 200 miles wide. Flying is far more efficient and much less exhausting than driving to cities throughout this state in a day or two or even three. The governor should have better things to do with his time.

The state-owned airplane fleet was a constant source of irritation to good-government types back in the day, and we regularly saw news articles about their use and/or over-use.

The Associated Press, for instance, published a story in 2007 about how then-Governor Rod Blagojevich had taken almost 1,000 flights on state planes in five years. Blagojevich was known to commute back and forth from his home in Chicago to Springfield on days when the General Assembly was in session.

Several politicians, including former Governor Pat Quinn, were legitimately criticized over the years for taking state planes to official government events and then hosting campaign events nearby. The government flights essentially helped subsidize their campaigns.

But the debate shifted during Governor Rauner's one and only term. The mega-rich Republican was criticized by a reform group in 2017 for renting a helicopter with his own personal money to visit a flooded area in Lake County. The executive director of the Illinois Campaign for Political Reform said at the time that there should be some sort of public disclosure when private funds are used for state purposes.

And Governor Pritzker was just criticized by another reform group for paying for private jet-rides for him and his staff to official events in Washington, DC and New York. "It feels wrong," said the executive director of Common Cause Illinois, according to Chicago's NBC 5. The reformer said the use of private money for public purposes concerned him.

It may "feel wrong" because of the amount of money involved, but there are some elected officials of more modest means who choose not to accept travel and mileage reimbursements, or per diems or whatever. For that matter, some public school teachers dip into their own pockets to pay for classroom supplies. What do we do about them?

Not long after Pat Quinn was elevated to governor after Blagojevich was impeached and removed from office, an Associated Press story favorably highlighted Quinn's decision to pay for most of his overseas travel as lieutenant governor out of his own pocket. The story also reported that Quinn refused to accept a daily meal-allowance when traveling and often paid for his own hotel rooms. "The thrifty image is in contrast to Blagojevich, who was criticized for his frequent use of state aircraft," the article's author claimed.

Not a single good-government group spoke up back then to say Quinn's alleged thriftiness with state money by paying his own way "feels wrong." But two rich guys in a row have taken heat for using their own money for trips on private aircraft instead of billing taxpayers.

I get the class-consciousness angle here. "Get a load of Mr. Bigshot flying around on private jets." But the guy is rich beyond most of our comprehensions; and, just like Rauner before, Illinoisans knew that when they elected him. Candidate Pritzker flew around the state on a fleet of private planes, and now Governor Pritzker is doing the same.

Maybe there's a dollar-point above which personal-spending for public purposes could be disclosed. But it "feels" like such a law would be targeting one guy. And to what end? Are we really entitled to know how much an elected official spends out of his or her own bank account rather than charging taxpayers?

The reformers need to think this whole thing through and come back with an actual policy-proposal that goes beyond feelings and addresses the potential for real abuses. The Center for Illinois Politics announced last week that it would host a public forum about this topic so it could be thoroughly discussed. Fine by me.

Either way, pick a lane. Don't spend decades complaining about the use of state-owned planes, and then suddenly shift to criticizing privately-funded flights.