Why Are Republicans Backing Betsy DeVos? 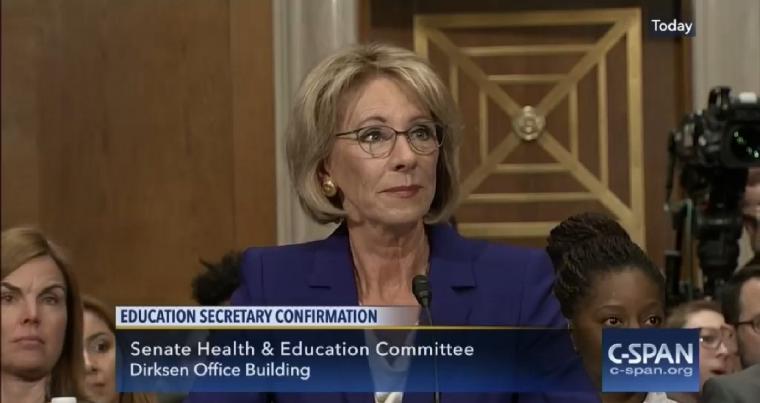 U.S. President Donald Trump’s nominee for Secretary of Education, Betsy DeVos, faces a great deal of opposition to her confirmation. Most of that opposition comes from Democratic politicians and Democratic organizations. But if both parties stuck to their stated principles and goals, the Senate would vote 100-0 against her nomination.

Democratic opposition is easy to understand. The Department of Education is a major power center for the party. It employs 4,400 bureaucrats and disposes of a $68-billion budget. That budget is deceptively small. Although federal funds represent only about 8 percent of national government education spending, those funds come with strings attached allowing Department of Education (and by extension the National Education Association [NEA], the nation’s largest labor union and a key Democratic constituency) to exert considerable control over every school district in America. DeVos supports for-profit charter schools that compete with failing regular government schools for tax dollars. She also supports “voucher” programs that allow parents to use tax dollars to send their children to private schools. To groups such as the NEA, her nomination is the equivalent of waving a crucifix at a vampire. No wonder the Democrats hate her.

Republicans, on the other hand, have been promising to eliminate the Department of Education since 1980, the year it commenced operations. Somehow, though, they never seem to get around to it, even when they have complete control of the federal government and can do anything they like.

Republicans controlled the House, the Senate, and the White House for four years during the administration of George W. Bush, and at the end of that the Department of Education still existed.

Now they control the House, the Senate, and the White House again, and instead of consigning the Department of Education to the dustbin of history as promised, they’re entertaining the nomination of a new secretary to head the department.

The truth is that Republicans like the idea of federal meddling in education (something authorized nowhere in the U.S. Constitution) as much as Democrats do. Their preferred form of interference is, if anything, even more pernicious than the NEA’s “keep our tax-funded combination daycare centers/juvenile prisons just like they are, only more money, please” model.

What, did you think a voucher would let you send your kid to a school that doesn’t meet government educrats’ “standards” and “guidelines”? Silly parent! Real private schools are for rich folks like Betsy DeVos!

There’s only one way to make American education great again: Complete separation of school and state.