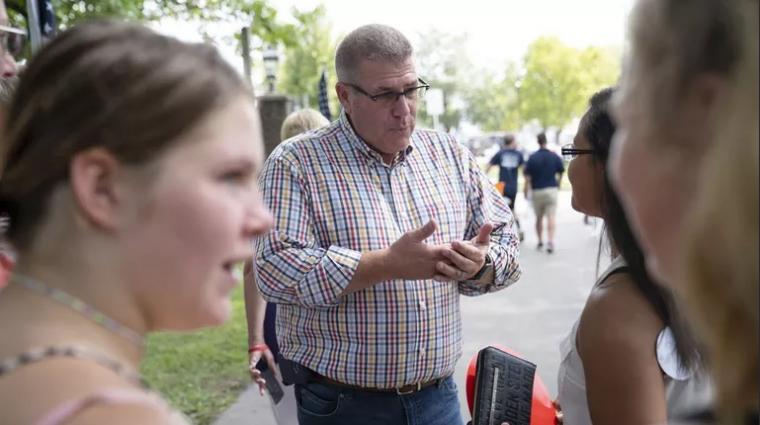 Irvin’s TV ads have tended to focus on crime (or corruption), but just fifteen percent of Republican primary voters rate crime as their top Illinois issue, while 54 percent said the economy was at the top of their list.

Irvin has big leads over Bailey when asked which candidate “is best suited to tackle crime in Illinois.” He’s ahead of Bailey overall 30-20 with GOP primary voters on the issue, including 32-20 with whites (the vast majority of the GOP base), 38-18 in the suburbs, 33-13 in Chicago, 34-23 with men, and 27-16 with women. Bailey is just barely behind outside of the Chicago metro region on the topic at 24-23. If crime were really and truly topmost to Republican primary voters, Irvin would be walking away with this.

Bailey is keeping it close overall partly because he’s just slightly ahead of Irvin on the all-important economy issue, 22-21. And that’s because Bailey leads Irvin by eight points (25-15) outside metro Chicago on the topic and leads slightly among women (19-17).

According to the poll, 56 percent of whites, 57 percent of men, 51 percent of women, 54 percent of suburban voters, and 61 percent of down-staters put the economy at the top of their list, with just 32 percent of Chicago Republicans prioritizing it and putting the topic in second place.

The Irvin people have said in the past that he is using the crime issue to signal to voters that, despite his outward appearance, he’s actually a Republican, without having to trumpet his specific party affiliation in most (not all) of his advertising. It’s worked as far as that purpose goes, but he’s not yet speaking loudly to the top voter concern. Even so, there’s plenty of time and Griffin money to move on to other items. We’ll see.

The Irvin campaign claims that the Democratic Governors Association and Dan Proft’s People Who Play by the Rules PAC have spent about $8 million attacking their guy, with another $2 million or so on the way in new DGA ads. The Irvin campaign just reloaded with $25 million from the state’s wealthiest resident Griffin after apparently burning through most of Griffin’s initial $20 million “investment.” The fact that he’s only attracting less than a quarter of the primary vote after all that ought to be hugely concerning. But, as noted above, there’s still time to crack the ceiling.

Those anti-Irvin ads are quite obviously having an impact on Irvin’s numbers — holding the nominal frontrunner down with the hope that Bailey’s campaign can somehow catch fire. But Bailey is such a hapless and cashless candidate that he’s going to need something huge.

Bailey has been trying like heck to win former President Donald Trump’s endorsement. Bailey recently attended a Mar-a-Lago fundraiser for US Representative Mary Miller and has been posting the photo he took with Trump on his social-media feeds. He touts the fact that he was a Trump delegate in 2020 and has shown endless irritation at being labeled by Irvin as a never-Trumper Democrat. But a WTTW news story late last week about how Irvin once said he hated Trump and called the former president an “idiot” and “bigoted racist” might help Bailey secure that nod.

In other words, Bailey has to secure that Trump nod. It may very well be his only path to prevent those undecideds from eventually breaking toward Irvin. It’ll hurt Bailey in the general election, of course, but that’s for another time.