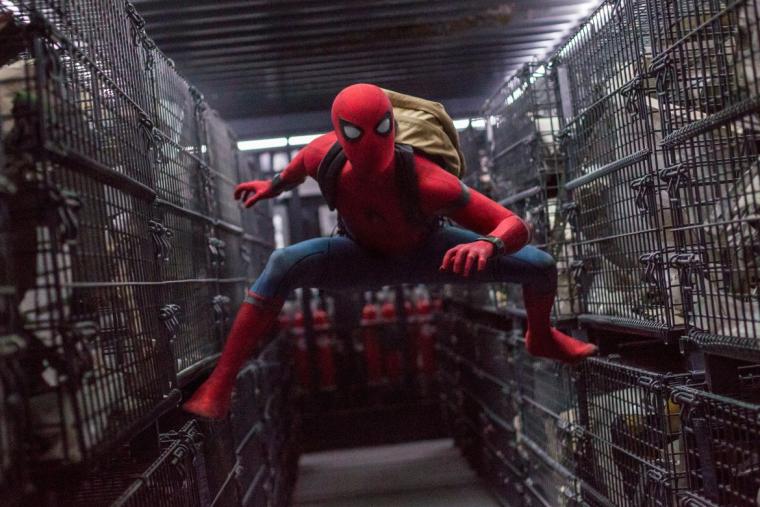 The first joke of Spider-Man: Homecoming is the prologue’s arrival of the U.S. Department of Damage Control to tidy up a mess made by the Avengers. Damage Control has apparently been part of the Marvel Comics universe for nearly three decades, but this is its first movie appearance, and the name is amusing for its unusual bureaucratic bluntness.

The last joke is a multifaceted nugget in the final seconds before the end credits roll – part intentionally premature cut, part nod to the movie’s PG-13 rating, and part capper to the teenage trials of poor Peter Parker. (He’s repeatedly called “Penis Parker” by one of his classmates, which was probably a major contributor to the MPAA’s decision.)

In between, Homecoming is an almost-constant steam of minor marvels contributing to a shapely whole brimming with pleasure. Like its protagonist when he’s Spider-Man, the movie has an infectiously exuberant youthful zing.

The basic arc is Peter working to earn the respect of his mentor and benefactor Tony Stark, and among many surprises is Spider-Man more often than not failing (or only 98-percent succeeding) in his crime-fighting and rescue operations. That’s fitting for a coming-of-age movie genuinely interested in both sides of Peter’s double life: He’s trying to live up to his unjustifiably inflated sense of superhero self while trapped in the body and life of a teenage boy.

At the center is Tom Holland, who looks (abs aside), sounds, and acts like the 15-year-old he’s playing. It’s not just that he hoots with joy at his powers and the Stark Industries-made Spidey suit he’s been given; he hits just the right notes of enthusiasm, awkwardness, entitlement, petulance, resignation, self-confidence, and self-doubt.

But it’s the script – despite having six credited writers – that’s most impressive. Plenty of superhero movies (and action movies generally) break for jokes, but Homecoming doesn’t just target those quieter moments; the humor comes in a relentless barrage that makes it easy to glide right through the rough patches.

In the hands of director/co-screenwriter Jon Watts and his two editors, Homecoming is a swift and sure 133 minutes, with the good sense to downplay its shortcomings. As usual with Spider-Man, the physics of web-swinging seem a little tricky for the CGI artists, and as a result the action scenes don’t entirely work. Their relative concision and the quick editing seem designed to obscure that, and each of the three showstoppers features at least one striking image: a ferry split down the middle, the vertiginous view from the top of the Washington Monument, a plane with glitchy cloaking technology.

Although it moves briskly, the film also takes time to breathe – once nearly stopping to let a kid wash his hands while two people wait to resume a discussion. In perhaps the movie’s finest touch, the final confrontation between Spider-Man and his chief adversary begins and escalates with a series of conversations – the power dynamic dictated by the elder simply being the elder.

When combat inevitably comes, the conclusion of the hero’s journey is satisfying if not particularly thrilling. In a welcome departure from the norm, the movie is ultimately a testament to Peter’s character rather than his abilities.

And he’s matched by a nemesis – Michael Keaton’s Adrian Toomes – with enough shading to make the conflict’s resolution (and the mid-credits epilogue) resonate more fully.

At the film’s start, Toomes’ salvage company loses a big job when Damage Control shows up. Resentful, he keeps some of the alien technology his workers have collected and – eight years later – has a thriving business selling powerful black-market weapons made with that technology. He also has a flying suit and takes offense when Spider-Man starts jeopardizing his income. (The production design of the Vulture has effectively menacing glowing green eyes. The costume design of Keaton’s coat with the silly fur collar is, I guess, a reflection of his character’s softer side.)

Toomes is a bit sketchy, and not just in his illegal activities. At core, he’s a working-class villain who merely wants to provide for his family, and that’s a narratively and thematically rich path. (He correctly rails against Stark for destroying things and then profiting from the cleanup.) Homecoming seemingly wants to cast him as marginally noble, to the point that when he vaporizes an employee, he claims he grabbed the wrong gun. Yet Toomes is also described as a “psychopath,” and his word choice in threatening (several times) to “kill” Spider-Man feels too extreme for how we’re meant to sympathize with him at least a little.

That’s the largest among my admittedly minor complaints. A few bits of dialogue are clunky exposition repeating self-evident facts, and the early “home video” callback to Captain America: Civil War is ugly, dumb, and largely unnecessary. The whole film is too Avenger-y for my taste, and specifically too Stark-y. (In fairness, that element is essential to the story and gives Robert Downey Jr. the opportunity to riff on daddy issues and to deliver a joke you expect in precisely the halting manner you want.) Besides the standard Stan Lee cameo, Gwyneth Paltrow shows up for no reason. The climax features at least two head-scratching moments with continuity, as we go from Point A to Point C without any apparent Point B.

But none of that matters much given the overall experience of Homecoming, which is found in the light details as much as the bigger superhero story. I scribbled down more than a dozen, but I’ll preserve the discovery by listing just a handful.

There are slyly funny features to the Spider-Man suit that show how little Stark trusts Peter, and the Training Wheels Protocol is but the first indignity his outfit inflicts on him.

And Silicon Valley’s blankly deadpan Gilfoyle, who actually smiles as the quiz-team adviser and gives a gorgeously dry reading of one of the movie’s best throw-away jokes (“ ... not again”).

And a creaky ceiling as Peter tries to sneak into his bedroom.

And Jon Favreau’s Happy Hogan, charmingly befuddled by Peter’s overeager badgering about his next mission.

And the motivational videos shown in gym class and detention featuring the impossibly square Captain America, including a random bit in which he gestures toward the teacher ... who’s standing on the wrong side of the television.

And Keaton, whose talents seem largely wasted until, late in the movie, he unleashes one of his wicked grins, and even later one of his dismissive sneers, and even later a brief look of disbelief that confirms how special this entry in the superhero genre is.

To put all this praise in context, before Homecoming I never found any movies in the so-called Marvel Cinematic Universe to be more than mildly engaging. (I’m uncertain if I’ve now seen five or six of the 16 listed on Wikipedia, which gives an idea of the impression they’ve left on me.) And I find the “universe” model of filmmaking ATMs popularized by Marvel Studios (and now aped by DC and the Star Wars franchise) the most dispiriting development in movies over the past decade.

But sometimes the assembly line lets some gold sneak through. In 2017, the title of best superhero movie will almost certainly go to the gorgeously grim outlier Logan. Spider-Man: Homecoming is its opposite in spirit, tone, and theme, and in many ways is exactly what we expect from the Marvel Studios template. It’s exceptional nonetheless, and would easily nab the crown in just about any other year.