“Horrifically Huge and Strange”: Lung, October 17 at the Village Theater 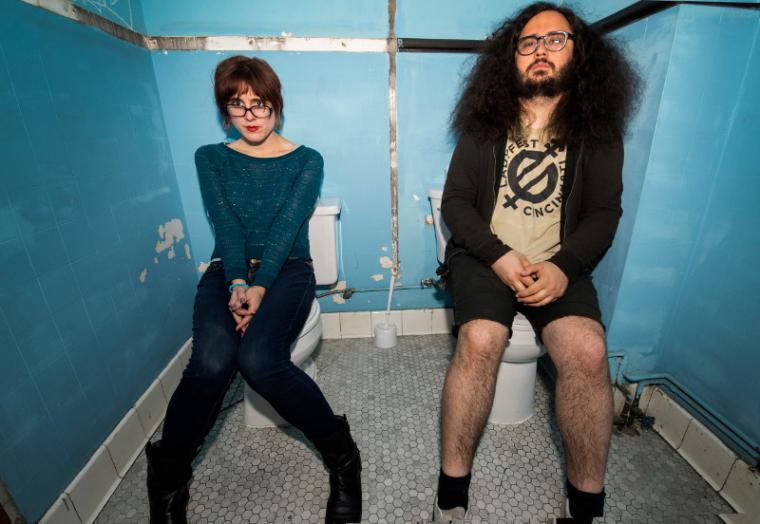 Wakefield had decided that she could no longer get what she wanted just looping her acoustic-cello and vocal parts. “The music I was writing kind of needed some drums,” she said in a recent phone interview promoting Lung’s October 17 performance at the Village Theatre. “It needed just a little something else.” Enter Caplan (who also plays bass in Foxy Shazam).

But there was a problem, Wakefield said: “When Daisy and I first started playing music together, I used my acoustic cello, and I hooked it up to different distortion pedals. ... The acoustic cello really is not built for that kind of amplification, so everything was feedback. ... It really wasn’t going to work. The amount of feedback that was happening made it so that it really wouldn’t be possible to do any live shows without making people’s ears bleed.”

A friend offered her an electric cello, and the opportunities quickly became apparent. “As a cellist who likes to play rock music ... I’ve always had envy of guitarists being able to plug in and use so many different pedals and get so many different sounds,” Wakefield said. “And also the sheer volume that electric guitars get versus what a cello can get. ... All of a sudden I could emulate the sounds of lots of loud rock music.”

Based on the band’s four-track demo (available at LungLungLung.Bandcamp.com) and three tracks from its debut full-length (out in November), Lung has quickly found its groove.

Wakefield – primarily as a singer – can produce beautiful sounds, such as the layered vocal intro to “Bottom of the Barrel.” (She went to college to become an opera singer, but “I decided it would be more fun to pick up an old instrument that I hadn’t touched in years and create music to play in bars.”)

Mostly, though, the Bottom of the Barrel demo is ominously catchy rock. “Actor” shows the electric cello capable of deep, doom-filled metallic riffs, while “Peaches” is snotty punk. “Control” and the title track split the difference, with the cello largely playing the role of rhythm guitar to Wakefield’s vocals. Throughout, Caplan’s drumming is a crisply blunt complement.

Three tracks Wakefield sent from the full-length demonstrate a less-direct side of the band – more measured and nuanced, and also far more adventurous in pushing beyond hard rock. Wakefield’s opera training is evident in the closing moments of “Velvet,” and “Hypochondriac” has an unexpected brightness.

What’s clear in all the songs is that Wakefield isn’t just rocking out on cello; the singing and the cello have been clearly thought out.

“The real challenge with electric cello is getting the sound that you want,” she said. “The cello that I use is a very, very cheap cello. That comes with a whole slew of problems and challenges. When I play my cello without any effects on it, it kinda sounds ... not terrible but just pretty ... – yeah, pretty terrible.”

The key, she said, was “finding pedals that make a cello sound like an electric guitar crossed with a bass guitar. I wanted to get a sound that almost sounded horrifically huge and strange. And so I’m still kind of working on that.”

Mostly, she said, she uses one pedal to add bass and distortion, and another to add some reverb. The result is an instrument that “has a little more of a voice. It’s like a live, breathing thing.”