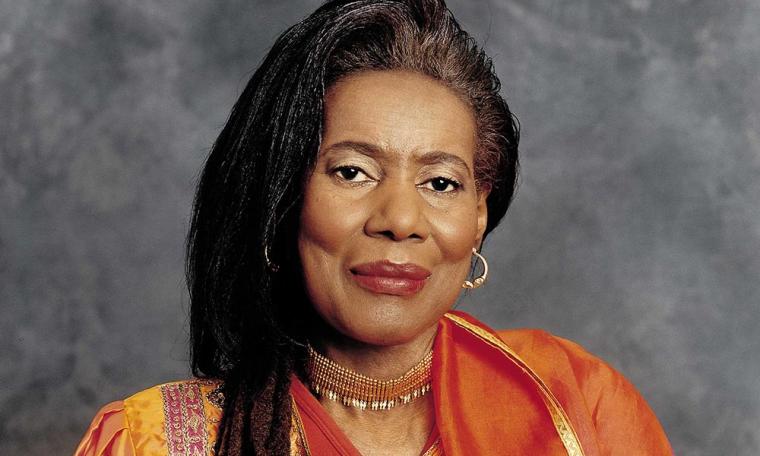 On August 27, we celebrated what would have been Alice Coltrane Turiyasangitananda’s 83rd birthday. Though she passed away in 2007, the spirit of her music reaches more people now than ever before thanks to a series of high-profile reissue campaigns and dissemination across the Internet.

Her catalog now enjoys widespread recognition as a massive influence on music of so many genres, within and outside of the realm of jazz – from hip hop (see: the production of her grand-nephew Flying Lotus), to ambient and drone music (see: the ocean of minimalist synth producers chasing the poise and grandeur of her harp-, synth-, and organ-focused work), to modern branches of spiritual jazz (see: Kamasi Washington, especially) to experimental music writ large. Deeply immersed in the Hindu and Vedantic traditions for most of her life, the presence of elements of sacred Indian music evolved from an inkling in her earlier, more straight-ahead jazz recordings (though nothing is truly straight-ahead in her catalog) into the central reason for her creation by the late '70s. The little-known era of her career in the late '80s that focused on Vedic chants and vocal ceremonies, captured on her extremely limited runs of cassettes that were given only to the members of her ashram, can now be celebrated on a large scale thanks to reissues of this music on the label Luaka Bop a few years ago. It goes without saying that every era of her career deserves close examination, and every album she ever made has the power to entrance, delight, or stun you if you pop it on full volume on your stereo and bask in its glory. Let’s take a look at a selection of moments from her catalog. 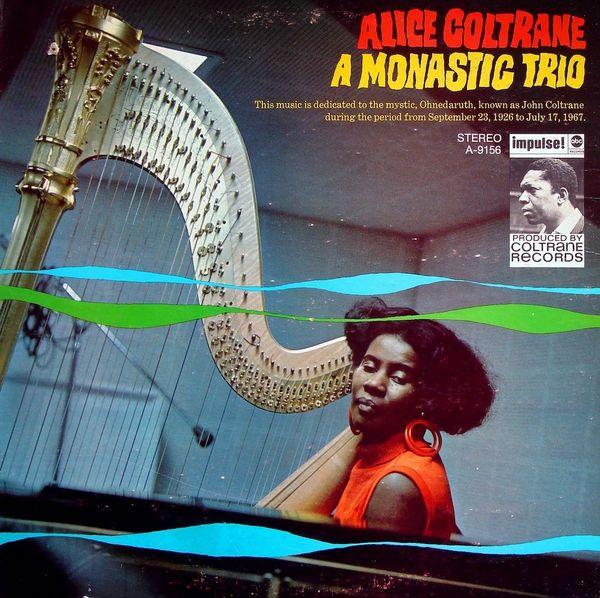 A Monastic Trio (1968): Coltrane’s first full-length album as a band leader, she envisioned A Monastic Trio as a tribute to her late husband John Coltrane, who had tragically died a year prior in 1967. Jazz heads will try to tell you that shades of Coltrane’s mid-period sound circa A Love Supreme characterize this album, but that’s too big of a reduction to let fly. They’ll point to the wide, emotionally ambiguous intervals à la McCoy Tyner that Alice Coltrane favors on the piano, or the presence of John Coltrane’s trusted sidemen Rashied Ali on drums and Jimmy Garrison on bass, or Pharaoh Sanders’s absolutely burning solo on bass clarinet somewhere in the vein of John Coltrane’s classic style. But Alice Coltrane carves out her own path here right from the get-go with her stunning piano performances, which wind up and down the keys with restless energy and virtuosic post-bebop dexterity before settling into gorgeous melodies and more wistful atmospheres. Most striking though, at the center of A Monastic Trio, sit her harp performances on the gorgeous “Lovely Sky Boat” and “Oceanic Beloved.” Both feel like windswept rubato fantasias of bright-eyed, major key beauty, animated by the constant flow of Coltrane’s harp and the perfectly understated accompaniment from the rhythm section, who coast along the water behind her with brushed snare rolls and occasional bursts of bass. 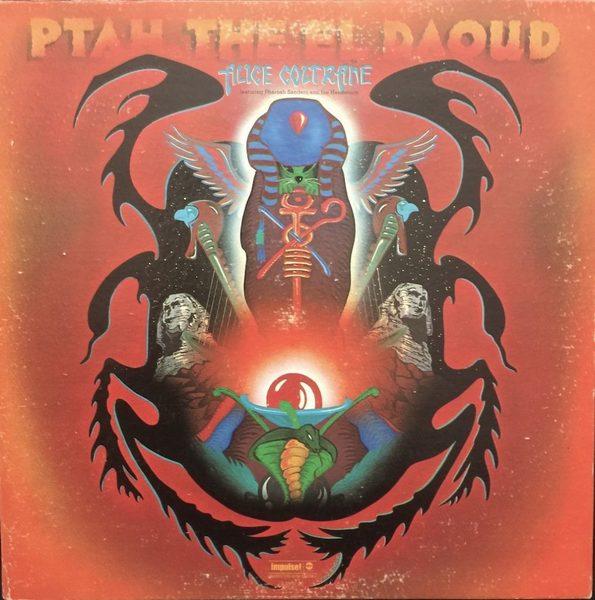 Ptah, the El Daoud (1970): Other than Pharaoh Sanders’ bass clarinet solo on one track of A Monastic Trio, Ptah, the El Daoud is the first Alice Coltrane album to focus on horns as lead voices – once again provided by Sanders, along with the masterful Joe Henderson – and, of course, it is a burner. By now Alice Coltrane had made clear that she drew personal and musical inspiration from Hinduism, North African cultures, Buddhism, and ancient Egypt, all of which float as thematic touchstones throughout the album. The positively regal, imposing head melody that kicks off the title track conjures the image of a Egyptian pharaoh (literally a man named Pharaoh in this case) gazing down over his kingdom as his armies march off into the horizon. The playing throughout Ptah, the El Daoud skirts around atonality and gets pretty out at times, especially when the saxes start winding through torrential solos and the rhythm section (anchored by bass legend Ron Carter) lets themselves stretch into more jostled, prickly counter-rhythms. Throughout all of this, Coltrane’s piano holds it down, both as the harmonic bedrock and as a continually surprising lead voice, as she veers between bursts of raw, powerful dissonance and more controlled harmonies that keep her band grounded somewhere in reality. Then we have the beautiful “Blue Nile,” which finds Coltrane back on the harp and both Sanders and Henderson switching to alto flute. Maintaining the modal jazz style planted somewhere between a post-blues tonality and Carnatic scales, the track shows off Coltrane’s brilliant approach to harp in the jazz setting. At times her cascades of notes provide a textural background for other players to sink into, while other moments find her plucking harsher volleys into the mix that ally themselves more with the bass. When it’s time for her solo, she splits the difference, not afraid to dazzle us with warp-speed runs down the strings, but also capable of slowing down to discover more deliberate, momentary melodies. 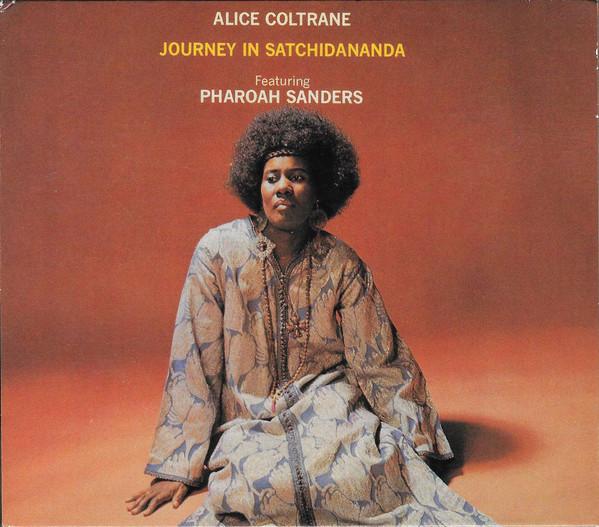 Journey in Satchidananda (1970): Many will point to Journey in Satchidananda as the defining Alice Coltrane record of this early era, or really of all eras of her output – and it’s hard to argue. The album captures the most complete synthesis up to that point of Indian classical instrumentation and musical strategies with Coltrane’s then-modern, almost-free approach to jazz performance. As soon as the title track kicks off with Cecil McBee’s indelible, bone-thick bass line planted against droning tamboura and gently shaking bells, you can immediately feel the air around you rarify and settle into a concentrated atmosphere. Coltrane’s harp playing reaches even more astronomical heights here, partially owing, perhaps, to its more prominent position and volume in the mix, and we catch every detail of her virtuosic performance. The album hovers in a state of subdued ecstasy, always seemingly a few moments away from exploding with a cathartic horn solo from Pharaoh Sanders, or content to coast through passages of gorgeous textural playing, with bowed double bass and tamboura floating in the haze against harp details. Album centerpiece “Something About John Coltrane” finds Alice Coltrane back on the piano, pouring her heart out for her departed husband in the form of post-blues soloing that grows increasingly dense and chaotic, often latching into spontaneous rhythmic arcs with McBee’s bass. Album closer “Isis and Osiris” replaces the whole band aside from Sanders, putting Ornette Coleman sideman and free-jazz legend Charlie Haden on the bass and Rashied Ali back on the drums, and the results are stunning. Perhaps the most varied track on the album, its wide arrangement contains the most open space of any of these songs, with Ali’s drums rolling with gentle thunder cracks behind constantly tumbling horn and bass solos. The track digs even deeper thanks to the presence of Vishnu Wood’s oud, an instrument similar to a lute or a precursor of the guitar, which casts off ethereal plucks and more active rhythms as a perfect complement to Coltrane’s harp.

[Note: Though Coltrane’s early-'70s albums get the lion’s share of the attention, and this primer is no exception to that unfortunately, I highly recommend you check out her string of albums from 1971’s Universal Consciousness to 1978’s Transfiguration — an unbelievable nine-album run that finds her pushing her sound far away from traditional jazz ensemble performances into the realms of cinematic orchestral arrangement (1972’s World Galaxy), fierce and ecstatic organ and keyboard performances (1976’s Eternity, or pretty much any album from this period), vocal-chant-led ceremonial music (1977’s Transcendence), and, yes, even an amazing album of electrified spiritual post-jazz exploration with Carlos Santana on guitar (1974’s Illumination).] 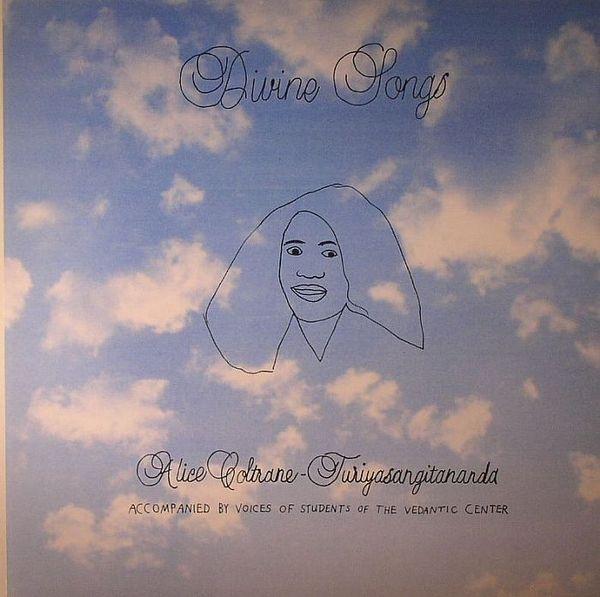 Divine Songs (Avatar, 1987): The aforementioned hyper-rare cassette release available only to the members of Coltrane’s ashram, Divine Songs now enjoys the acclaim it always deserved after a number of its tracks appeared in the 2017 reissue World Spiritual Classics: Volume 1. Even after immersing yourself in the more overt jazz style of her early-'70s work, and tracing the path of her remarkable experiments in form, structure, and instrumentation throughout the mid-'70s, Divine Songs may still come as a surprise to you. Though Coltrane’s vocals had appeared on many releases up to this point, typically in the form of group chants planted within other instrumental contexts, Divine Songs turns the spotlight directly on those Vedic chants and her lead vocals as a central element. Coltrane’s reverent, unabashedly passionate voice hypnotizes in its swooning cadences and elongated vowels as her melodies dip up and down the Indian classical scale. The accompanying instruments are just as mind-boggling, as Coltrane lays down cosmic peals of harmony on her keyboards, Wurlitzer organs, and synthesizers. “Rama Rama” settles into the most beautifully narcotic atmosphere with Coltrane’s solitary vocal against tambouras, synths, and bells. “Rama Guru” and “Om Shanti” both reach a state of collective ecstasy with their cyclical group vocals and hand claps. “Keshava Murahara,” with its hanging drapery of string harmonies and whirling synth flourishes, provides a darker emotional space for Coltrane’s voice to sink into. Perhaps more than any other album in her catalog, Divine Songs is one to put on in the darkness late at night and let your mind float through the cosmos alongside Coltrane's.