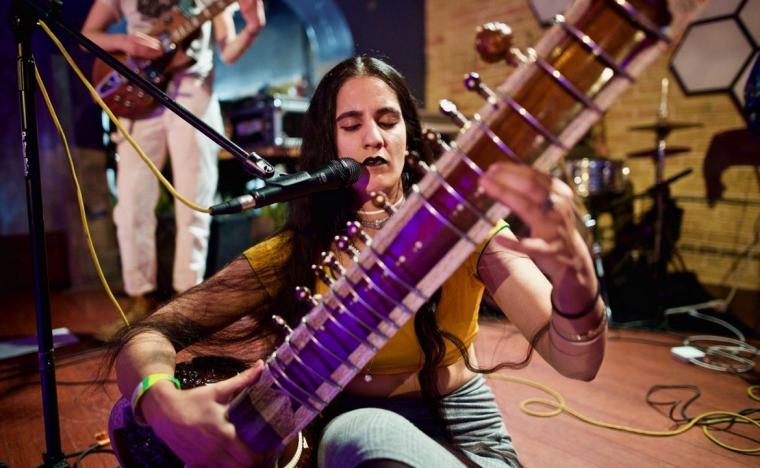 Ami Dang's music sketches out a hybridized vision of experimental yet accessible songwriting and production that spans the many disciplines and levels of the American and diasporic international undergrounds in which she has created. As a fixture of the Baltimore DIY scene for years, Dang has been an ambassador of cross-fertilization between far-flung styles including North Indian classical music, bedroom-pop beat-making, and extended drone and ambient exercises. Led by her emotive, masterful sitar playing, her tracks find room for moments of ethereal improvisation and swooning lead lines, along with details of electronic production and synth performance that re-contextualize her lead instrument against diverse soundscapes.

The description “East meets West” feels like it fundamentally misses that which makes her music so striking, because at this point, many of the tropes that she incorporates in her music can’t be localized to one region or tradition. Aside from the presence of the sitar, which clearly grounds her work in the South Asian canon, she deals in electronic elements that have no easy reference point. Is it Tangerine Dream-style Berlin School synth arrangement? Is it omnivorous sculpting in digital audio workspace that evokes the work of polyglots such as Aisha Devi, Holly Herndon, or Eartheater? Is it a post-minimalist update of the work of eternally returning drone forerunners including Terry Riley and La Monte Young – or, perhaps more accurately, one step back to the bottomless kirana gharana singing of their teacher, the original drone progenitor Pandit Pran Nath? It is all of these things and more.

Dang’s most recent release, 2019’s lush LP Parted Plains, displays all the skills that have come to shape her practice to date. The transfixing “Bopoluchi” flows through a series of cascading sitar melodies all while a backdrop of high-definition synthesis broods and percolates into motion behind them. The track’s final minute or so soars into glorious cross-pollinated aural territory, where the intensifying lines from her instrument flow in time with patches of fine-grain, hyper-textural synth – with chubby bass notes and contoured washes that sound like they were sourced from the circuits of a classic Buchla synth. Album highlight “Sohni” hits hard with its over-layered network of sitar tones, blasting out with a stereo spread in which every corner is filled with percolating, twanged melody. Moments like these, when Dang sidesteps typical conventions of live performance and allows her instrument to cross the uncanny valley into the realm of fine-tuned digital arrangement, attest to her vision as a producer and her sense of the heights to which her tools can raise her music. The track manages to evoke touchstones as disparate as the guitar orchestras of Glenn Branca, the looped melodic excursions of Noveller, and the existential dread of large, doomsday, post-rock ensembles such as A Silver Mount Zion. “Souterrain,” the towering closer of Parted Plains, peels back the layers of electronic ornamentation to allow Dang’s sitar to take center stage as it pours out gently reverbed melodies. Around a minute in, however, an ominous synth arpeggio bassline creeps into the mix along with torrents of raw electronic tone. From there, the track navigates a tightrope between swelling synth abandon and crystalline lead voices, culminating in a triumphant web of bubbling synth tones.

Chicago-based journeyman guitarist Bill McKay joins Dang on the November 16 bill, bringing along his achingly beautiful post-American Primitive style finger-picked guitar work and nuanced songwriting. This year, MacKay added the solo record Fountain Fire to his deep catalog of both solo records and albums in duo formation with luminaries including Ryley Walker and Matt Lux. Released via venerable Chicago mainstay label Drag City, Fountain Fire captures exactly what makes MacKay a continuing source of plucked-out-of-time six string mastery. The album splits the difference between dynamic improvisational leads and off-the-cuff riffing with composed passages in which additional guitars, keyboards, and subtle synths provide accompanying harmonies. The glistening “Welcome” seduces us with its jazzy chord structures and juxtaposed electric and acoustic guitar tones, hitting some sweet spot between progressive English folk and pastoral mountain rock. “Try It On” slinks its way up through ascending melodies of open-tuned folk grandeur, and gives us the welcome addition of MacKay’s own lovely vocals to the mix – sounding as much like a beleaguered songwriter stranded in a cabin in the forest as an urban troubadour making sense of his place in the sprawling landscape of Chicago. The monumental “Dragon County” closes out Fountain Fire on a high note as MacKay’s guitar playing combines fluid comping, languid slide textures, and a more formless, quick wrist style that provides the harmonic bedrock for the other elements. MacKay builds tension throughout its six-minute run time, letting each layer of guitar shine in the spotlight before sinking back into the mist. His jittering electric leads, though, demand our attention as complex details within the stew of sounds, cast off with distinct effect processing and fleet-fingered melodic phrasings.

Ami Dang and Bill MacKay play Rozz-Tox on November 16 with an opening set by Idpyramid, admission to the 9 p.m. is $10-15, and more information on the night is available by calling (309)200-0978 or visiting RozzTox.com.