Bandcamp Absorbed into Epic Games: Where Do We Go from Here? 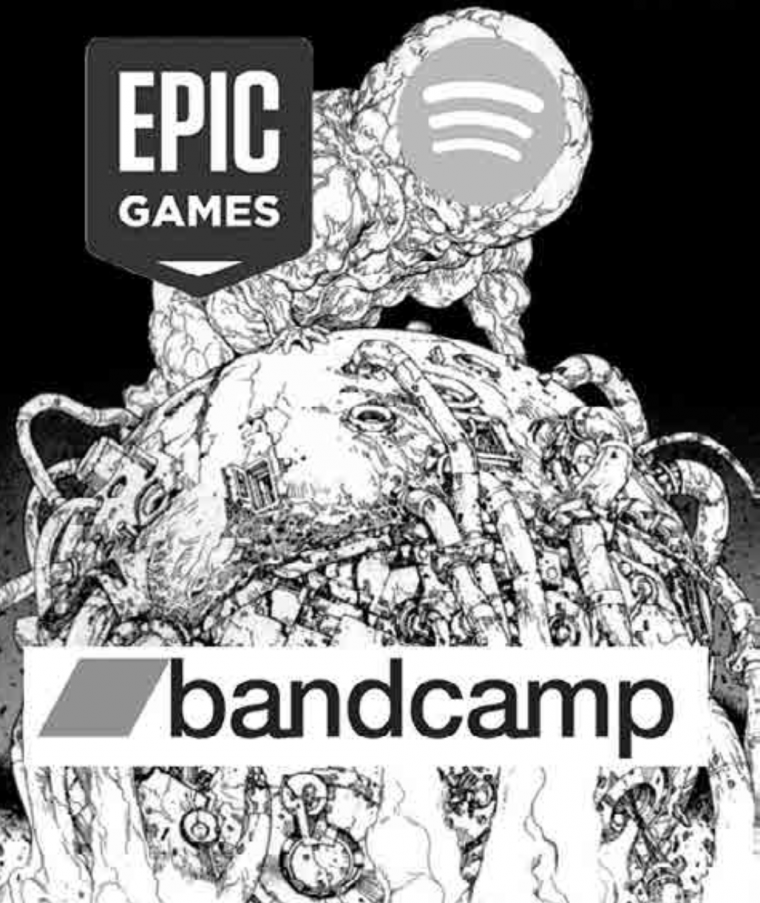 For my writing in this music column, I farm through the music-hosting platform/streaming site Bandcamp every month to find new music released by artists in the Quad Cities and surrounding areas. It's a perfect way to keep informed of the music coming from underground creators typically off the beaten path of music coverage, and to get a snapshot of what's happening in the QCs, et cetera, at any given moment. For over a decade at this point, Bandcamp has been the go-to for underground and above-ground artists and labels of all stripes and levels of popularity (really anywhere below the echelon of the major mainstream artists) to upload their own music for public consumption in a direct and hassle-free manner.

Perhaps most importantly, the platform allows listeners to make direct music purchases of digital files, physical editions, and whatever associated merchandise an artist might have available, essentially creating a market akin to a record store where real money goes directly into the hands of the artists (with a small cut to Bandcamp, of course). This means that artists get paid, say, $8 for every digital sale of their album, or $20-plus per LP sale, instead of receiving the fractions of a penny paid out for individual streams on streaming platforms such as Spotify.

This model has positioned Bandcamp as one righteous protagonist in the music industry wars, the little guy actually paying out artists that the giant corporations eagerly exploit for their bottom line. Through the successes of this model, maybe best exemplified by the massive success of the site’s Bandcamp Fridays in which they forego their own cut of sales and pass all of their typical 15 percent on to the artists, the site has come to be perceived by both artists and listeners as one of the last bastions of independent music in the online marketplace and treated with a certain degree of reverence.

If you’ve been paying attention to the news surrounding Bandcamp over the last week or so, you already know where I’m going with this. The platform issued an announcement on March 2 letting the world know that they had been purchased/acquired by the company Epic Games, the makers of such video-game phenomena as Fortnite and Unreal Engine, and folded into their corporate structure. This was … a weird development, to say the least. The benevolent little independent-music platform had suddenly come under the wing of a company that holds the imaginations of millions upon millions of gamers, many of them teenaged – the company that put a giant holographic Travis Scott avatar into Fortnite to perform a virtual concert for millions of viewers.

This news has rippled across the landscape over a few contrasting paths. Some artists immediately withdrew their catalog from Bandcamp, citing their refusal to funnel any money made from their releases into the pockets of a giant gaming corporation. Other artists and listeners looked forward, in keeping with the language of Bandcamp’s announcement, to the merger’s promise to “push development forward across Bandcamp, from basics like our album pages, mobile apps, merch tools, payment system, and search and discovery features” – a nuts-and-bolts side of the issue that could result in a major facelift for the platform’s visual framework which has remained virtually unchanged since its inception. While the first dissenting camp certainly had the loudest voices in the discourse that appeared on Twitter in the announcement’s aftermath, a lot of people (especially those with no stake in hosting and selling their music on the platform) just thought it was funny as hell that Bandcamp is now essentially a subsidiary entity of Fortnite, the video game where you can dress as Ariana Grande and do a little dance after you shoot someone with a sniper rifle in an environment called Tomato Town – all rendered in cartoonish, gore-less violence that even young children’s parents wouldn’t bat an eye at.

What’s the right stance to take here? The answer remains to be seen in the specifics of what Epic Games’ influence does to Bandcamp’s business model, interface, and overall ethos as a company viewed as some kind of benevolent godsend for smaller artists in the music industry without the weight of the entire major label industrial complex behind them. At the end of the day, Bandcamp has always been a corporation itself. The 15 percent that they take out of transactions for artists’ sales goes to, yes, a corporate entity that of course seeks to grow and build itself for more profit. The public perception of the company as "the good guy" is itself a sort of marketing tool, however accurate and deserved it may be in the grand scheme of things, to generate more profit. So those who might grouse at the idea of paying Epic Games their 15 percent instead of the Bandcamp corporation could be splitting hairs.

Then again, this also boils down to a matter of optics from all angles. If the public perception shifts to Bandcamp being something to stay away from in order to maintain the time-honored stance of rejecting corporate ideals, then the once seemingly miraculous model that resulted in people playing real money directly to artists could suddenly go dry. It’s a bummer. Artists themselves weren’t the ones who got Bandcamp scooped up by a bigger corporation. If the business model remains the same, which Bandcamp has promised (fingers crossed), then artists still stand to benefit in the same exact way from their direct pathway to sales. If people care about supporting artists, but give up on the platform because of Epic Games’ involvement, it feels like a case of misplaced energy that will ultimately punish musical communities for something out of their control.

There is, however, another factor that looms over the corporate merger. Epic Games is partially owned by the company Tencent Holdings, a grab-bag entity that has a large percentage of stock in major labels like Universal, not to mention, the boogeyman itself: Spotify. (The name Tencent Holdings is particularly on the nose when you know they have a stake in Spotify, as the notoriously low-paying streaming platform requires somewhere around 50 to 100 streams for artists to hold 10 cents.) In essence, the little independent do-gooder has been absorbed, Tetsuo-from-Akira-style, into the giant blob monster of the music industry. In this sense, the cut that Bandcamp takes from purchases will essentially funnel into the same bank that gathers money from Spotify. All of the slices of the pie continue to be gobbled up by the giants at the top of the food chain. It doesn’t feel good, to say the least.

So where does this all leave artists and listeners who have come to rely on Bandcamp as an essential part of their ecosystem, a platform that offers a rare hope of sustainability and renumeration in an unforgiving musical landscape? Again, it remains to be seen how much the platform changes. If Bandcamp jettisons all of the features and policies that have made it into what it is today and devolves into some kind of marketplace for video-game licensing opportunities, metaverse tie-ins, or even (gasp) NFTs, then all hope is lost. If it just keeps trucking along the same way it has been, maybe gets some updates to its user interface, and picks up a few more features, but still pays out artists and still allows anyone to upload music, then that’s fine. If the 15-percent cut of each sale goes to some mega-corporation but 85-percent goes to the artist, that’s still 85-percent directly paying someone for their work. That’s still food at the grocery store and rent getting paid. The ball is in the court of these companies, and we’ll have to wait to see what they do with it.