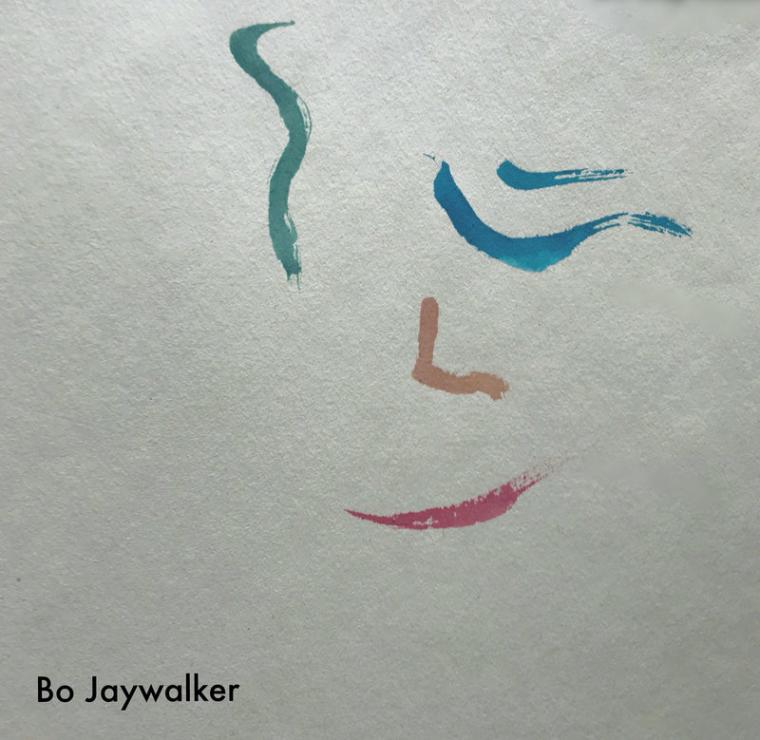 Davenport-based experimental psych-folk freak Bo Jaywalker released a full-length album straight to Bandcamp in mid-April, making it available for digital download for the telling amount of $4.20. The album expands in bizarre directions over the course of its often winding song structures, colliding smooth digital beats, multi-layered synth missives, and passages of weighty spoken word with his own vocals.

The album seesaws between two poles: electronic-focused pieces rooted in digital production and collage techniques vs. unadorned folk-influenced pieces that highlight his stripped-down guitar and vocal performances. Though often uneven in the balance between these styles, Bo Jaywalker LP manages to hit sweet spots where these two disciplines converge on a nice middle ground in which the electronic production elements gird the vocal performances with just the right amount of skewed, digital swagger. The track “Donahue Blue,” in particular, navigates this divide, planting synth pads and a lo-fi guitar chord progression against falsetto vocals that crackle with phasing effects and warm, melodic upswings. Such a track wouldn’t feel out of place in the lineage of electronic-infused indie rock that took over the industry roughly 10 years ago with such acts as Animal Collective, MGMT, or post-acoustic Bon Iver albums.

Bo Jaywalker has no qualms about airing his infatuation with substances and a general lackadaisical lifestyle. On the folk track “Someday Soon,” he proclaims, “I dream to get drunk / I toil [maybe?] to get stoned,” while “Dimebag” finds him claiming that, “I ain’t worth a dime / so I shit on company time.” Moments like these start to build a picture of the Bo Jaywalker persona: working dead-end day jobs, finding solace in drugs and in the act of making music. While I know many of us haven’t quite stood in these shoes, I still ask: “Who among us hasn’t been there?”

The artist also clearly possesses a sense of musical eclecticism and knows how to structure an album so any one style doesn’t rise over the others in the grand scheme. Bo Jaywalker LP finds room for lovely piano ballads such as “Raynah’s Lullaby,” claustrophobic techno/trance-adjacent workouts inluding “So Many Tomorrows!,” and subdued, lo-fidelity keyboard wanderings like those featured on the track “Joy.” Though the production rarely rises above the level of stacked Garageband loops and chintzy synth tones, Jaywalker still wrings plenty of personality and charm out of these simple elements.

When the production does rise into weirder heights, as on the raucous, carnivalesque intro of “Someday Soon” or the spiraling keyboard solos of opener “Brothers & Sisters & All Others,” we get the sense that Jaywalker knows his way around the keyboard and knows how to write an affecting song, despite the more amateur aspects of his production approach. But then again, that amateur nature also aligns his work with such outsider pop artists as R. Stevie Moore or Ariel Pink – artists who find liberation in simpler production styles and use them as novel juxtapositions against the pop-vocal cores of their tracks.

Then we have the album closer “Sammy Don’t Rapp // Special Thxx,” a 13-minute journey that plays out more like a bizarre radio play populated with conversing voices in various accents, some of which are pitched up to chipmunk highs. The track’s intro channels the weird comedy-skit detours of Frank Zappa’s album We’re Only in It for the Money. By the time the track devolves into a bare-bones rap freestyle, despite one voice’s assurance that “this is not making the album,” we’ve veered into a bizarre strain of outsider hip-hop that the artist himself knows isn’t necessarily palatable for all listeners. The track still adds to the skewed kaleidoscope of styles that the Bo Jaywalker LP visits, and proves to be just as charismatic as his earlier folk tunes. But the track is far from over. Jaywalker fills the following nine minutes with a labyrinth of ambient synth passages and chiming sine waves, playing us out with endless fanfares of winding keyboard tones and smeared electronic washes.

Following the release of  the Bo Jaywalker LP, Jaywalker uploaded a standalone track called “Song For Vaughn <3” to his Bandcamp. The track’s album cover sets a heartfelt tone for the music, with a simple picture of a hand with a crude face drawn onto it in pen, presented along with the text for the title that reads “somg [sic] for vaughn by bo.” Jaywalker’s whole persona makes it hard to tell whether the misspelling was intentional here, as just another little detail adding to the outsider mystique, or whether he really couldn’t be bothered to spell his own song title correctly. Either way, it works. The track is a short and sweet charmer, built over a whirring backdrop of organ tones and squishy synth figures, as Jaywalker addresses his friend Vaughn, belting out a sweet little ditty in his name. The track lands somewhere in the neighborhood of a forgotten Harry Nilsson B-side, or an entry in the aforementioned R. Stevie Moore’s catalog of quirky home recordings. We get the sense that Jaywalker loves his friend Vaughn and wants to support him, so the song essentially fulfills its purpose.