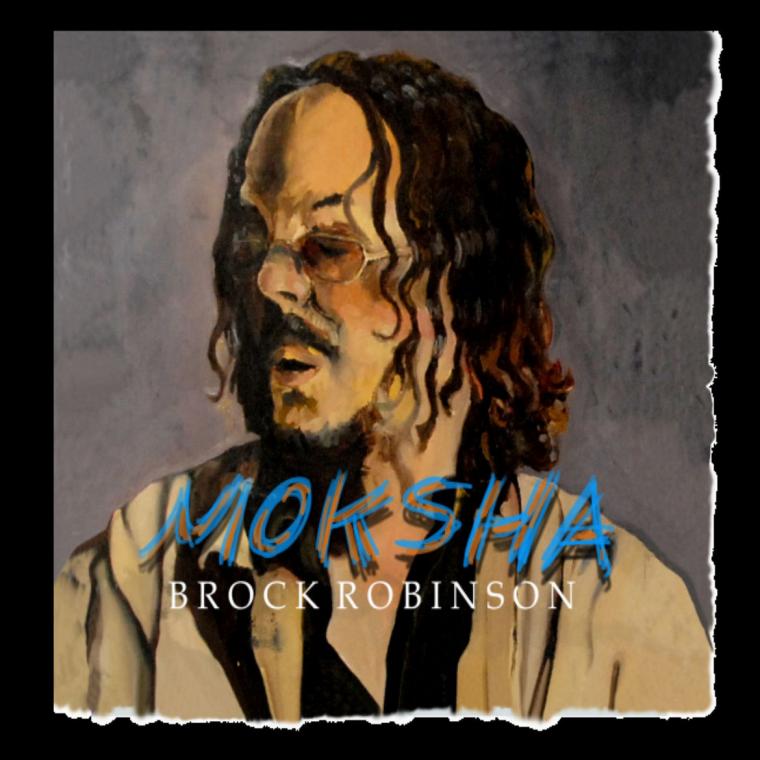 For his “new” album MOKSHA, released in early April via Missouri-based label Powdered Hearts Records, Davenport-based songwriter, producer, and multi-instrumentalist Brock Robinson unearthed a batch of material that he had originally written and produced around 2008. In the album’s liner notes on Bandcamp, Robinson declares, “I intended it to be the last organized production that I ever made. As I sunk into the depths of schizophrenia I made about 10 or 11 songs all of which were intended to be my swan song.”

I, for one, am glad that he took this music off the shelf and dusted it off for a proper release, because MOKSHA turns out to be a low-key gem of twisted, left-field production, mutated rock-adjacent songwriting, and bizarro vocal charisma. The album lands somewhere in the neighborhood of Ween around the time of their debut album GodWeenSatan and Frank Zappa in his fertile '80s period that coupled outré lyrical themes with some of his most adventurous fusion arrangements (yes, one of the tags on the album’s Bandcamp is “zappaesque”). However, Robinson pieces together enough unique and ultimately ridiculous ideas of his own to move his work beyond the level of imitation, taking up residence in his own weird-ass little cul-de-sac of surprising and wholly entertaining freak music.

Robinson’s unpredictable approach to vocal recording and delivery transmits a large chunk of the manic energy that flows through MOKSHA’s veins. His voice reaches us, along with every detail of the productions in general, through a patina of tape deck hiss, coloring it in with little squiggles of distortion and lo-fi texture that attest to the album’s informal home recording style – an approach that places Robinson along a continuum of projects in the lo-fi folk and rock landscapes (see: Sebadoh/Sentridoh, early Microphones, other K Records fare). Robinson flits on the mic between moments of paranoid whisper-singing, screaming, near catatonic moaning, and warped crooning. The Ween flavor really comes across in the moments when he chooses to pitch his vocals up into a helium-inhaled chipmunk squeak, or to pitch it down to a low end rumble akin to someone moving in slow motion in a quaalude haze.

Album highlight “Mantis” finds Robinson densely layering multiple tracks of voice, some blown out with distortion and others pitched up, into a wall of harmonies that float around a fried central guitar line and what sounds like an oscillator wailing. The song offers a great example of the artist’s command of the lo-fi production style: while some artists present their four-track recordings in a purposefully unmastered, muffled state to convey a sense of isolation or stripped-down simplicity, Robinson’s tracks ripple with sheer volume and power. Their beefed up final presentation and the clear attention paid to mixing and mastering captures the grit and the raw grain of the recording process and emphasizes the rough edges to draw out the detail of each guitar line, drum beat, or vocal run.

The menu of genres and compositional styles that Robinson explores on MOKSHA moves far beyond folk or rock and off into stranger realms. On “Leftism,” we get snatches of twitchy progressive fusion carried by a rapid-fire bassline that tumbles up and down the scale in time with a mallet-like keyboard patch, while multiple guitars air out with endless sustain and tremolo in the background. Against this backdrop, Robinson layers pitched-up and pitched-down vocals together into some freakish composite that sounds like a stoned lounge singer toasting, almost rapping, under neon lights in the corner of a dive bar. He breaks out something like fiery sludge metal if it were soaked in acid and left out to dry in the sun on the unhinged “Jesus Robbed Me.” The track captures the “depths of schizophrenia” that the artist mentions in his liner notes as it whiplashes between mournful desert folk played on slightly out-of-tune guitars into passages of full-on screaming and chunky guitar riffage. The fact that these disparate styles make perfect complements to each other attests to Robinson’s fearlessness as a songwriter who treats each two-to-five-minute strip of tape as a chance to lay out a full narrative with its own upheavals and unexpected twists.

Robinson balances the more twisted moments of MOKSHA with a couple instances of downright lovely, more straightforward songwriting. “New Love Song,” with its reverbed-drenched guitars and swooning mid-tempo ballad atmosphere sounds like a lost B-side from Bowie’s The Man Who Sold the World, while “Grow Up” taps into a windswept Rubber Soul-type folk stomp animated by shakers and auxiliary percussion. The lengthy “Glass Ship” gets the closest to a more traditional folk rock composition, carried by a tinny acoustic guitar (more or less in tune!) strumming out a cyclical chord progression against a lumbering bass and occasional chimes of lead electric guitar. The track gives Robinson a chance to show off his vocal harmony chops, as a choir of his own pitched-up voices float and mesh together behind his more mid-ranged lead to almost angelic effect. Though he starts off in this more conventional mode, Robinson starts to sneak in layers of what sounds like another pitch-shifted take of the song itself and plants them right overtop of the song currently in progress, creating a surreal, temporally shifted experience as if we’re seeing multiple parallel dimensions play out in tandem. He caps off the track by highlighting that other pitch-shifted take and cranking it way up until it becomes an all-consuming wall of noise, once again highlighting the sonic artifacts and distorted details that emerge from home four-track recording.

On album closer “Ex’es,” Robinson trades in the guitars for a standing layer of synth and a twinkling sitar-like keyboard tone that gel together, for a moment at least, into an almost welcoming atmosphere – that is, before each progression ends in a sour note that perfectly casts the mood back into uncertainty, even terror. The song exemplifies some of Robinson’s greatest strengths as a songwriter, producer, and vocalist: his awareness of spatialization within the stereo spread and how to fill the corners of each track with unexpected flourishes; his ability to layer different potentially conflicting emotional resonances into an illogical whole that makes its own twisted form of (non)sense; his conception of the human voice as a lump of clay to stretch and squish at will, all to suit the needs of the piece at hand. MOKSHA emerged from almost fifteen years of dormancy, gathering dust in some tape drawer, I imagine, and still sounds fresh, weird, and inspired.