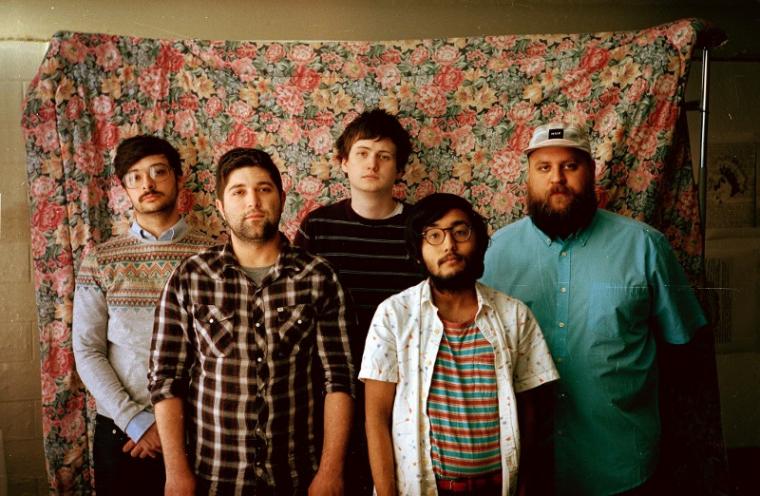 During the process of writing and recording their 2015 album Dealer, two members of Foxing shared experiences that would shape the direction of the music.

“I lost my grandfather, and he [Conor Murphy] lost his grandfather,” Foxing bassist and lyricist Josh Coll said in a recent phone interview. “It was the first family member that I’ve ever lost, and that whole experience just made me ... look at things in a way I wasn’t.”

Foxing is a St. Louis-based band that will play Daytrotter on September 24. Murphy and Coll, who work collaboratively on Foxing’s lyrics, let the loss they each experienced drive Dealer.

This represented a lyrical and thematic departure from their 2013 album The Albatross. “I swear I’m a good man,” Murphy sings on that album’s “Rory.” “So why don’t you love me back?” As he sings about having his heart ripped out, the hoarseness in Murphy’s voice grows.

While Dealer drips with just as much emotion as The Albatross, it’s expressed in a completely different way. The raw anguish that marked The Albatross is nowhere to be found. Murphy opted for a calm contemplation in the expression of lyrics on many Dealer tracks.

For example, in the Coll-penned “Indica” – about his military experience – he writes of being haunted by how he acted when he served. “Troubles stay when lids lay over eyes,” Murphy sings. “The frames and faces I’ve mistaken for kids whose lives I may have taken.”

Rolling military drums and Murphy’s trumpet back the track. Murphy sings softly, reflecting on the deaths of children for which the narrator was responsible.

Coll talked about how he followed a specific theme in a lot of the songwriting he did for this album, straying from the relationship problems of The Albatross.

“A lot of what I wrote about was a fear of death or a fear of what it means to lose people, things that are a little bit more important to me than problems with girls, something like that ... ,” he said. “A lot of it to me is a theme of ownership. Owning what you’ve done instead of deferring it or placing blame on outside things. ... I think guilt also runs through my stuff as well.”

The whole band, which collectively writes the music, also took a different approach to Dealer. Everyone stayed in Vermont for a month to work on the album, rather than writing at home in St. Louis whenever they had the time.

“Dealer, to me, required a little bit more foresight,” Coll said. “Instead of just jamming songs out and seeing where they took us, it was a lot more about trying to challenge ourselves with song structures.” The band takes a more linear approach to songwriting, avoiding the verse/chorus pattern of songwriting.

On “The Magdalene,” Dealer’s lead single, the vocal melody streaming between octaves builds on a background of guitar scaling up and down a mountain of single notes. After a string of sounds and thoughts, the song concludes after it’s said what it needs to say.

The lead track from the album, “Weave,” follows this same songwriting style, and the same kind of guitar line. But the song also addresses the expectations the band felt following its first album.

“Drained out a tunnel in an albatross,” Murphy sings in the chorus. “Now I’m haunted by the bird. Her hounds left tracks on my breath, until I had no more air left.”

Coll mentioned that the response to the band’s first album created the pressure of expectations. Critics praised the The Albatross, with Stereogum saying that “Foxing is notable more for the way they’re blowing open the possibilities of soul-searing Midwest basement music than for reverently going through the motions. It’s a wildly original album from a wildly talented band, and you should absolutely listen to it.”

But had the band not laid The Albatross to rest in the first breaths of the album, Dealer still lives up to “soul-searing Midwest basement music.” While Foxing traded the fiery questioning of failed relationships for a quieter, contemplative exploration of more serious issues, the music doesn’t lose a bit of its emotional impact.

Foxing will perform on Saturday, September 24, at Daytrotter (324 Brady Street, Davenport; Daytrotter.com). The 8 p.m. all-ages show also includes Mountain Swallower and Archeress. Tickets are $10 in advance or $15 at the door.