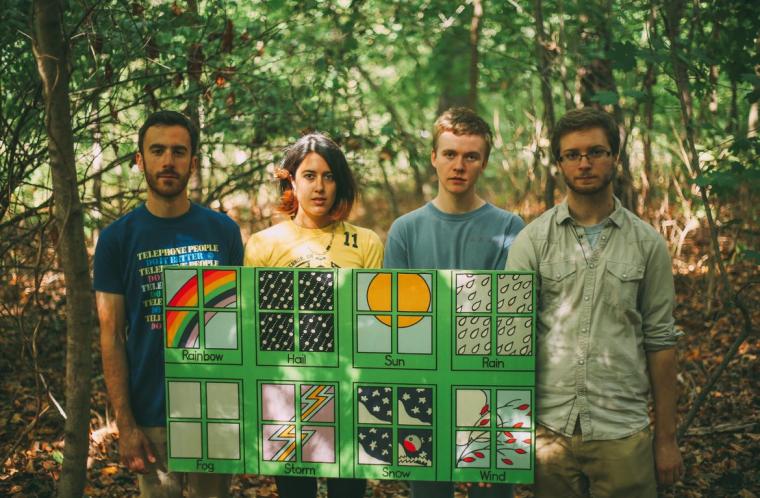 On Pinegrove’s latest album, Cardinal, Evan Stephens Hall shows a knack for speaking in an accessible and unpretentious way about the struggles many people face. His lyrics read like people in their 20s actually talk.

“So satisfied I said a lot of things tonight,” Hall sings in “Aphasia.” “So long aphasia and the ways it kept me hiding. It’s not so much exactly all the words I used. It’s more that I was somehow down to let them loose.”

In a phone interview promoting his band’s July 27 Rozz-Tox appearance, songwriter/vocalist/guitarist Hall explained how a couple authors helped steer him in this direction.

“I was reading a lot of George Saunders and David Foster Wallace, who both have very conversational tones, but they’re very smart and they both go after the big questions,” Hall said. “So basically that helped me realize that there is a way to approach ... emotionally complex in a casual way that still ... doesn’t feel flippant.”

The lyrics of every song on the album are written in a style similar to “Aphasia,” hiding shades of meaning in simple language. In “Size of the Moon,” for example, he sings about looking to his father for counsel: “I’ll talk it out with my dad. It’s always nice what he says. He’ll have some good advice from something in a book he read.”

The recognition a parent’s wisdom comes off as genuine in this treatment, but there’s more to it: the acknowledgment that the advice comes from a book rather than experience and thought, implicitly calling into question how much it should be trusted.

Hall got his start with serious songwriting at the beginning of his college career. Since he graduated in 2011, Pinegrove has released a handful of EPs compiled into last year’s Everything So Far. But Hall’s current lyrical tone is a recent development.

“I think that it was the beginning of college that I started to take myself seriously as a songwriter,” Hall said. “That, of course, has its pros and cons, because I took myself a little too seriously, and then I had to wait for the pendulum to swing back a little bit and have more fun with it. I think that’s when the songs started really getting good.”

Hall’s outfit has recently toured with Into It. Over It. and The World Is a Beautiful Place & I Am No Longer Afraid to Die, and the emo label is often attached to Pinegrove.

But their sound doesn’t quite match up with their tourmates. It has lo-fi indie-rock vibes and introspective lyrics, yet Pinegrove adds a surprising element to the emo repertoire.

A haze of country hangs over Cardinal, from the slight twang in Hall’s voice to the banjo rolling behind the guitars to the pedal steel in the back of the songs. Hall said that sound helped expand his songwriting.

“I’ve found myself attracted to [country] melodies, the intervals, the inflections,” he said. “At first, it took me a little bit of time to acknowledge it to myself, but it opened a window for me.”

So Cardinal incorporates aspects of that music, such as the classically country-sounding strumming in the intro of “Waveform” and the way Hall bends his voice in “Old Friends.” The singer said that the Americana influence on Pinegrove is also rooted in the music that the members’ parents played when they were growing up.

Some of Hall’s earliest songwriting was from a band he was in with his dad as a kid, the Reptiles. He said everyone in Pinegrove comes from a household that was musical in some way, or at least supportive of the children’s musical pursuits.

And those families can be heard on Cardinal beyond their influence. Members Zack and Mike Levine pulled their father into the recording studio to contribute pedal steel, while Hall’s father played piano on some of the album’s tracks.