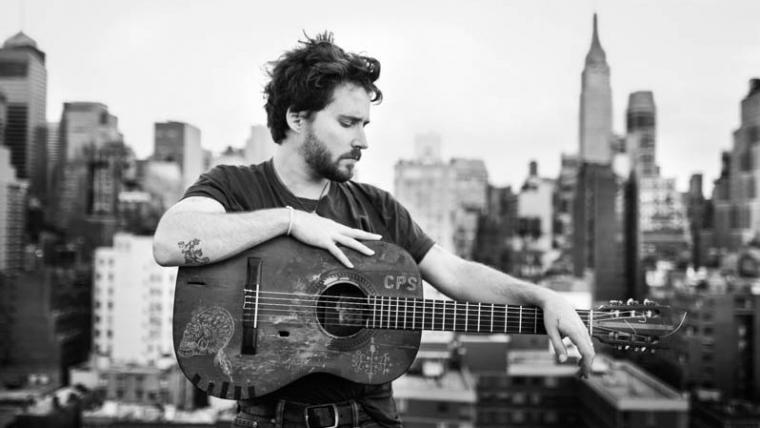 Singer/songwriter and guitarist Christopher Paul Stelling brings his intimate live show to Rozz-Tox on February 23, as part of a tour following the release of his new album Best of Luck, which landed on February 7.

Stelling has explored many paths of guitar-focused songwriting over the course of his career, ever since his first album Songs of Praise & Scorn in 2011. His tracks fall into styles ranging from crunchier, electric rock in the vein of Neil Young’s Crazy Horse, to a more lumbering, mid-tempo stomp that evokes classic outlaw country, to straight-up guitar-and-vocals-only whispered folk reveries. The constant across all these styles is his confident singing voice, which feels at once gritty enough to lead a band through a rollicking rock jam, and lovely enough to hold our attention when it’s the only thing that accompanies his guitar.

Take, for instance, the gorgeous little ditty “Made Up Your Mind” that appears on Best of Luck. His guitar playing here lands somewhere in the quadrant of the arpeggio-heavy American Primitive style practiced by John Fahey and his acolytes, and features a chord progression that sounds remarkably close to the Jackson Browne-penned classic by Nico, “These Days.” Over this spiral of six-string harmonies, Stelling’s voice rises into curlicues of melody with vowels that melt between multiple notes in the upper register. The song focuses on a narrator seeking some kind of redemption, asserting in the chorus that, “Maybe I can change” and asking in one verse, “Are you trying to tell me we’re all doomed to repeat all of our histories?” Despite this, Stelling’s narrator seems sure that “you’ve already made up your mind about me,” as if to say that even this beautiful ballad, if offered as a paean to whomever he seeks forgiveness from, won’t be enough to change anyone’s mind about him. While some songwriters start with a bleak thematic template and dark atmospheres and maybe find a moment to shoehorn some optimism into there (I think of Will Oldham and his album I See a Darkness), Stelling seems to do the opposite: He starts with a template of comfort and beauty, of bright-eyed and pleasing tunes that you could play for your grandma, for sure, but that carry some inkling of darkness and self-deprecation somewhere within all that bliss.

Another single from Best of Luck, “Have to Do for Now,” doubles down on the country-gentleman angle with its music video that shows Stelling decamped with a woman in a nice little log cabin, playing guitar on the porch with a dog, brewing tea, and striding through the forest. In keeping with the hint of darkness at the heart of his work, the video takes a quick about-face in terms of tone when Stelling reaches the verse where he describes an accident in which he “fell out the tree and cracked [his] head.” The video shows us this plain and simple on screen, with Stelling lying in a shallow stream with an open head wound and blood pouring out of him into the water. It’s a welcome change in the context of the video – a bit of immediate drama that shifts its almost too treacly surroundings into a new light, as if to remind us that violence and a bit of gore can pop up within an otherwise idyllic countryside life, and could in fact sit at the very core of the memories that make up the song’s narrative. From a musical perspective, the song doesn’t telegraph this lyrical shift with the blunt force of the visuals. Stelling’s melody just streams right on ahead in its state of finger-picked beauty, maintaining its sense of calm and ease. This is somehow even more effective than if the song had suddenly shifted to a minor chord and a darker mood at that moment. This potentially traumatic injury is just one little stepping stone in a broader spread, and doesn’t need to be singled out as a climax in itself. Stelling shows how these events are all braided into the fabric of human experience, and we have the capacity to move on from them given enough time and healing.

Christopher Paul Stelling plays locally on February 23 with additional sets by Liv Carrow and Erin Moore, admission to the 8 p.m. concert is $12-15, and more information is available by calling (309)200-0978 or visiting RozzTox.com.