Coiled Around Thy Spine, "From the Ashes" 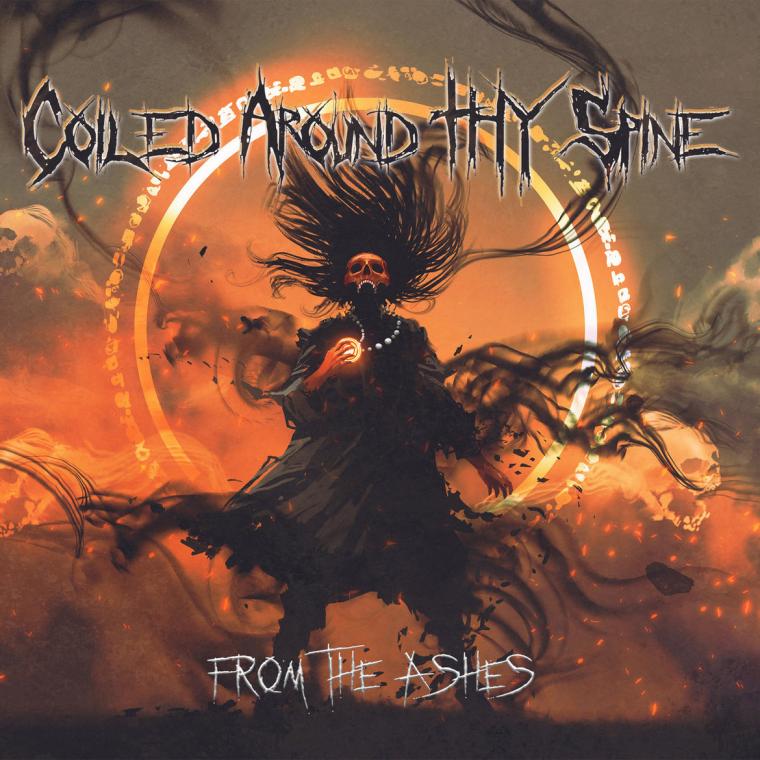 Coiled Around Thy Spine, "From the Ashes"

There must be something in the water in the Quad Cities that makes absolute shredders out of its residents. I feel like every month, when I’m digging through local music on Bandcamp, some new project that I’ve never heard of before leaps out at me with a malevolent grin and says, “Here, take this masterful, fully realized [death metal] [black metal] [progressive metal] [grindcore] album that was probably recorded in some guy's home studio but that hits with rock-solid ideas and a professional level of production that can compete with the most high-budget release on a larger label.” Of course, in today’s tech-enabled landscape where a home studio can have everything it needs to make a professional sounding record without breaking the bank, it shouldn’t be a surprise that these primo metal records keep popping up from the Quad Cities. And yet it gets me every time.

This time around, the excellently named duo Coiled Around Thy Spine smashes into my skull or, you know, my spine, around which they are coiled, with their sophomore album From the Ashes. From what I can tell, the band is split between Turin, Italy, and Rock Island. (Rock Island is listed as the location on their Bandcamp and appears in some promotional materials I’ve seen.) They exist primarily as a studio project without any intent to play live. The band’s promo pics feature the duo of guitarist/bassist Sergio Costa and vocalist Daniele Rosso dressed in grim black outfits, gazing off in different directions, definitely not looking at the camera, as they stand in a derelict warehouse that looks like a level from Doom – an effect amplified by the fact that Costa is wearing a Doom shirt. If someone knows where I can find this spot in the Quad Cities, let me know, as I too want to take some cult-as-hell promo pics there. I guess it could be in Turin, though, so I could be out of luck.

In an interview with MetalNoise.net, Rosso and Costa make clear their worship of seminal death-metal acts such as Children of Bodom, Carcass, and especially Death (RIP Chuck). The influence of The Sound of Perseverance-era Death is all over From the Ashes, in the form of the album’s hyper-technical, constantly shifting riff structures and general progressive attitude toward death-metal composition. The duo can easily shift on a dime from warp-speed thrash riffing over atomic-clock double-kick drum patterns into more sweeping, melodic guitar architectures that land somewhere in the neighborhood of baroque classical shred. The moments when Coiled Around Thy Spine shed the chordal riffing and latch into more syncopated, overtly proggy figures that climb up and down the scale really scratch that Death sweet spot, not to mention Rosso’s thrilling vocal style that hits with an abrasive, full-throated screech similar to the one that Chuck Schuldiner had evolved into before his early passing. At times, From the Ashes reminds me of tracks such as “Bite the Pain,” with its spidery, fretboard-spanning breakdowns planted between heavy jackhammer riff sections, and I swear that I thought this before I even noticed that the band released a cover of “Bite the Pain” in their lead-up to the album.

Even if Coiled Around Thy Spine just managed to offer us a competent facsimile of Death or Carcass, that alone would be enough to win my adulation. Not everyone is capable of playing music like this, and if they can, not everyone can render it at such a crisp, crushing level of production quality. But the music of CATS (yes, that’s how their band name shakes out as an acronym) rises above the level of mimicry by virtue of all the little compositional flourishes and creative detours the duo throw into their lengthy progressive opuses. The band’s guitar work and vocals offer plenty to dig into on their own, but the moments in which layers of atmospheric keyboard creep into the mix allow their harmonies to expand in new directions. Album highlight “Graveyard of Thoughts” fits an absurd number of discrete riffs and sections into its six-minute running time, kicking off with a plaintive, clean guitar section that abruptly gives way to some huge Children of Bodom-style twin guitar anthemics – all frosted with little neo-classical melodic runs. It makes me bummed that the band has chosen to remain a studio project, because I would love to see how these tracks would play out in a live setting someday.