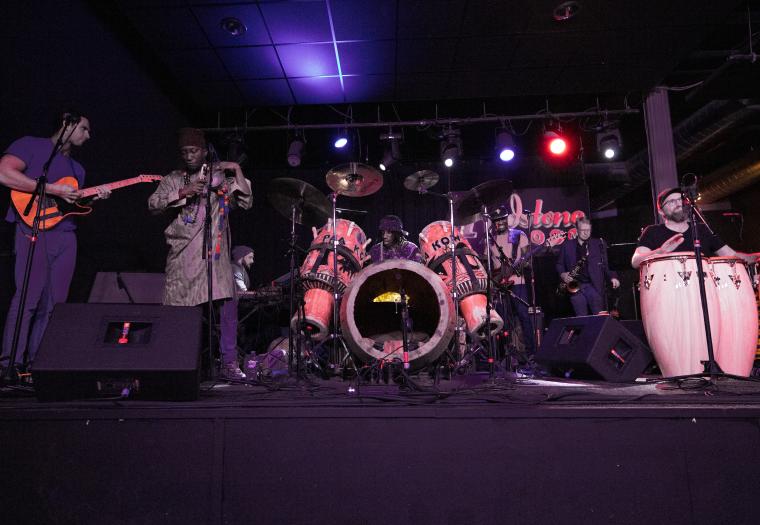 All photography by Kevin Richard Schafer

Watching the Ghanaian-born drummer Paa Kow (pron PAH-Koh) perform with his Afro-Fusion Orchestra last Thursday evening, 7 October, at the Redstone Room in Davenport, one wondered briefly if he functions on pure enthusiasm. His fellow-musicians were alert to every key- and tempo-change, and Paa Kow often surprised his audience by leading them down different melodic paths when a song seemed instead to signal its conclusion. 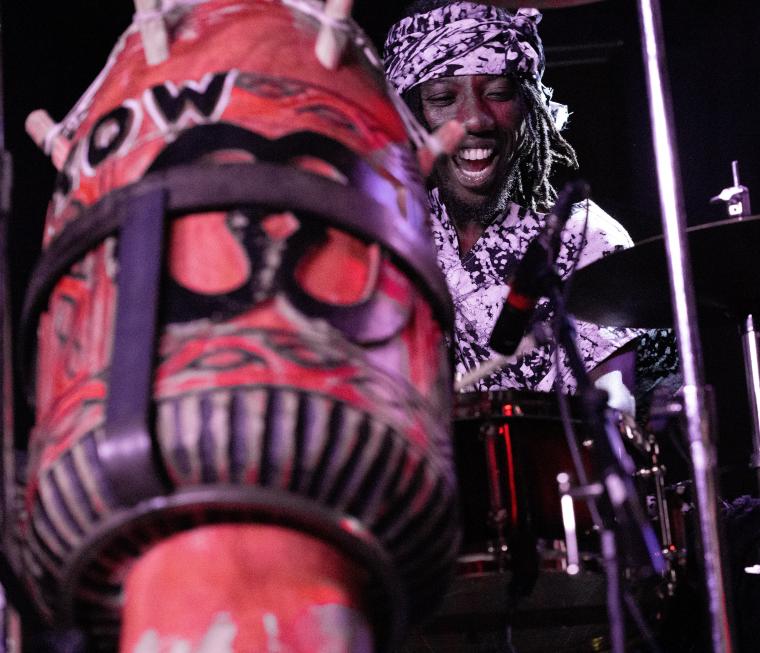 Paa Kow at the traps

Keeping himself in the drummer’s seat (one almost wrote “driver’s seat”) felt like an effort of will. When Paa Kow finally stepped out from behind his kit to sing an arrangement with “dreams come true” as its refrain (and here he tapped into the audience’s own enthusiasm, the Orchestra having earned it many times over that night, to enlist them in a singalong), he called to mind the Red Queen’s response in Through the Looking Glass to Alice’s description of travel customs in her world: “It takes all the running you can do,” the Red Queen said of her own, “to keep in the same place. If you want to get somewhere else, you must run at least twice as fast as that!”

“When we play,” Paa Kow said at one point, “you’ve got to move.” Eventually, he persuaded a number of audience members to get up and express their appreciation on the physical plane. Those of us who elected to remain chairbound were also dancing, mind; just on a different plane. We were dancing in our heads. 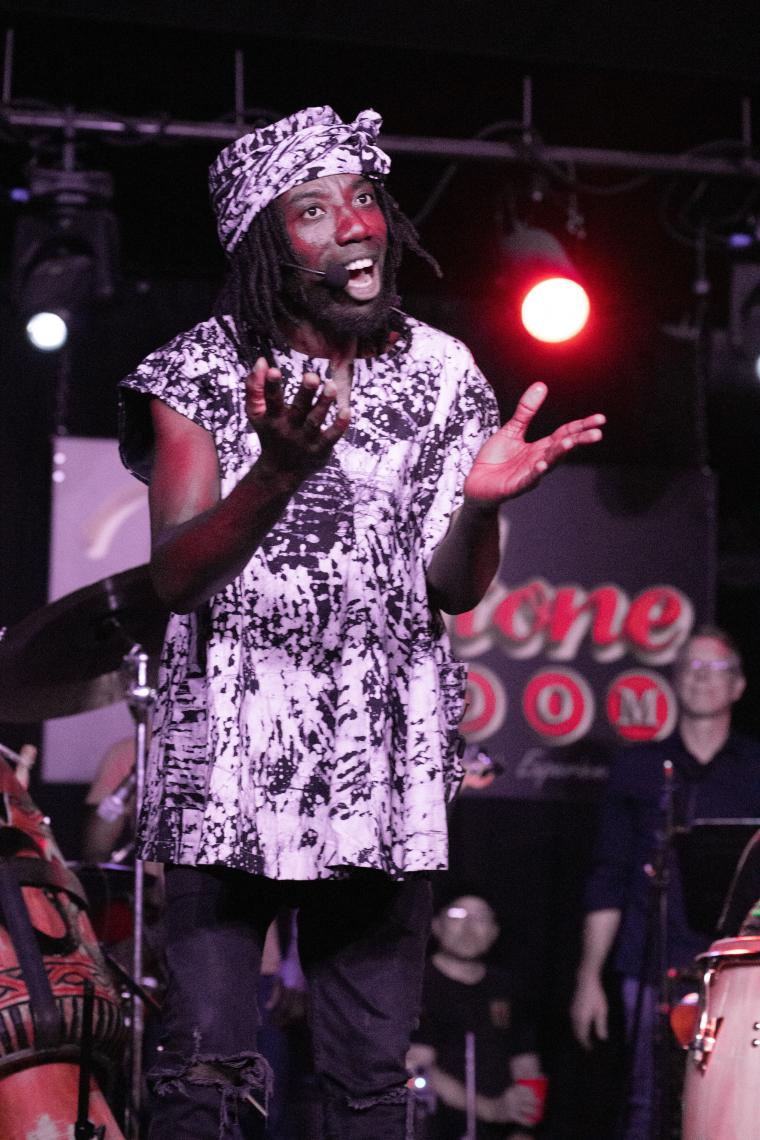 Having grown up in the small West African village of Enyan Denkyira, near Cape Coast in Ghana, Paa Kow was steeped in the regional musical traditions early on. Just as an African citizen must speak a plethora of dialects, or else s/he just doesn’t get out much, a Ghanaian could not avoid the musical traditions, even if he wanted to, for some ungodly reason. If you wish to be a social being, you attend social functions; and by sheer osmosis, a person will pick up on the polyrhythms.

Paa Kow says his musical evolution began at the age of five. His uncle and mother sang in Enidado Professional Band, a traveling concert band; Paa Kow came along for the ride out of necessity. Those polyrhythms got him as surely as anything, and he constructed his first bass-drum on which he would practice, assembled from trash cans, wire, and fertilizer bags, with a door-hinge, an old sandal, and some string serving as an ad-hoc drum-pedal. In time, his musical interests broadened further to include jazz-fusion, particularly artists like George Benson, Spyro Gyra, Chick Korea, and Weather Report. On the cusp of going pro, Paa Kow would play with such talent as Kojo Antwi, The Tagoe Sisters, Amandzeba, George Darko, and Amakye Dede. A story by William Nana Yaw Beeko in the 12 April 2015 issue of Modern Ghana (“Meet Ghana’s Most Artistic Drummer Paa Kow, Making Waves in the USA”) raised his profile further still, among Africans and the expatriate communities in the West (and general citizens who get into African music). 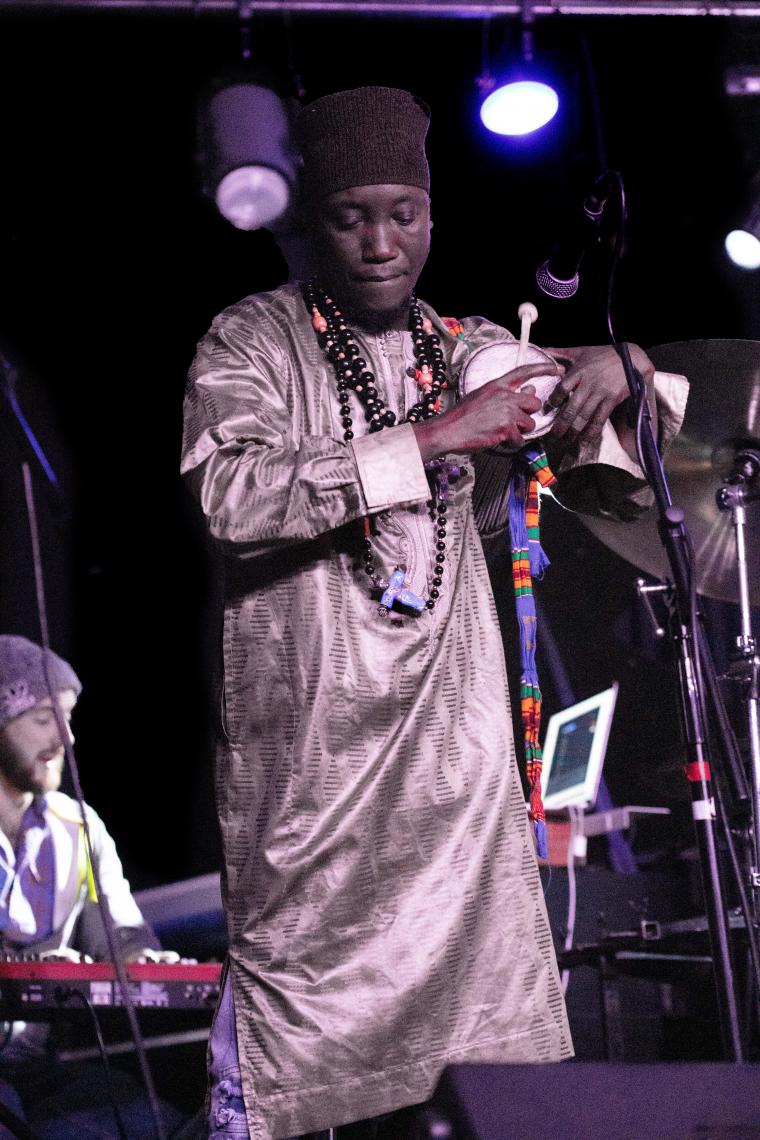 In Ghana, as in much of Africa, music is as much a means of communication as it is an artform; and Paa Kow and his stage colleagues communicated a-plenty Thursday night. Be it through a call-and-response vocal review of arms (Paa Kow shouts out in Akan; his colleagues respond in kind) or through the performance itself, the Orchestra had a message to deliver its audience: Music is also a constantly-evolving entity, its syncretic nature forever absorbing influences coming at it from every possible direction on the planet. In a world where nothing ever seems to change except the details, a person who can focus one’s attention entirely upon such an entity — or, if you prefer adjusting your similes, a musée imaginaire, a “Museum without Walls”, as André Malraux famously termed the visual arts emanating from the four corners of the globe, and reaching far back beyond our history, into prehistory — appears, in a musical context, somewhat ironic: By drawing on a wealth of centuries-old musical traditions from different historical modalities, one might create new modalities, new forms of expression, and thereby plant oneself firmly in the vanguard. (And more quickly, too: We haven’t even touched on the influence of technology in disseminating the gospel of the groove. But that’s a whole other thing.)

The Orchestra presented itself with a unique delivery-system for getting in our heads (and bodies). Paa Kow’s kit, fitted with a custom-made and hand-carved bass drum, was book-ended by fontomfroms, hourglass-shaped tom drums. The kit was further adorned with snares and cymbals, representing the Western element in the Fusion formula. His present-day kit is the only one of its kind around, so it’s fair to say that he’s come up in the world since then. To preempt peoples’ questions about the fontomfroms (he must get it a lot), Paa Kow demonstrated the different sounds he could coax from it by striking at it from different angles. That did the trick.

Accompanying him was Mamadou Sarr Mbengue on tama, a small talking-drum, hourglass in its shape, but smaller, held between his arm and ribs, and played with a small stick that bends at the end. Throughout the night, he would loosen more and more of the tension-cords on the tama’s drumhead, in order to vary its pitch. Though reserved for the first half of the performance, Mbengue couldn’t withstand the polyrhythms for long, and it was a joy to see a middle-aged man getting into the spirit of the occasion so enthusiastically.

The talking-drum really speaks (sorry) to the notion of music as communication, as it was observed by nosy Western missionaries in the Eighteenth Century that men with such drums who rode horses across the land were in fact transmitting messages, with the variation in pitch determining the meaning of a given sound. In the Twentieth Century, John F Carrington wrote in his 1949 book The Talking Drums of Africa about just how complex those messages really were, with low tones used to represent male tones and higher tones female tones. Whole “sentences” could be understood by the drum’s phrases, broken up by pauses, which could be heard over a five-mile radius. Before there were telephones, the drums could tell a village whether an attack was imminent or a celebration was off the hook. 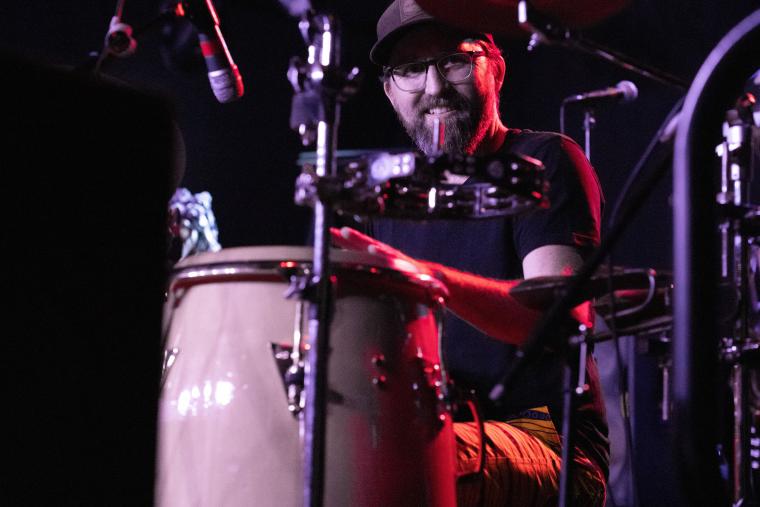 Peyton Shuffield contributed his congas to the sonic mélange. At one point, he used what looked like a shekere (a dried gourd with beads or cowries woven into a net covering the exterior, which one shakes to provide additional texture to a groove), but may have been an afoxé (an Afro-Brasilian variation on the gourd, much larger in size). Shuffield was the one who first invited Paa Kow to sit as a guest artist at the University of Colorado, so we should be kissing his feet for the fact that Paa Kow now resides Stateside. 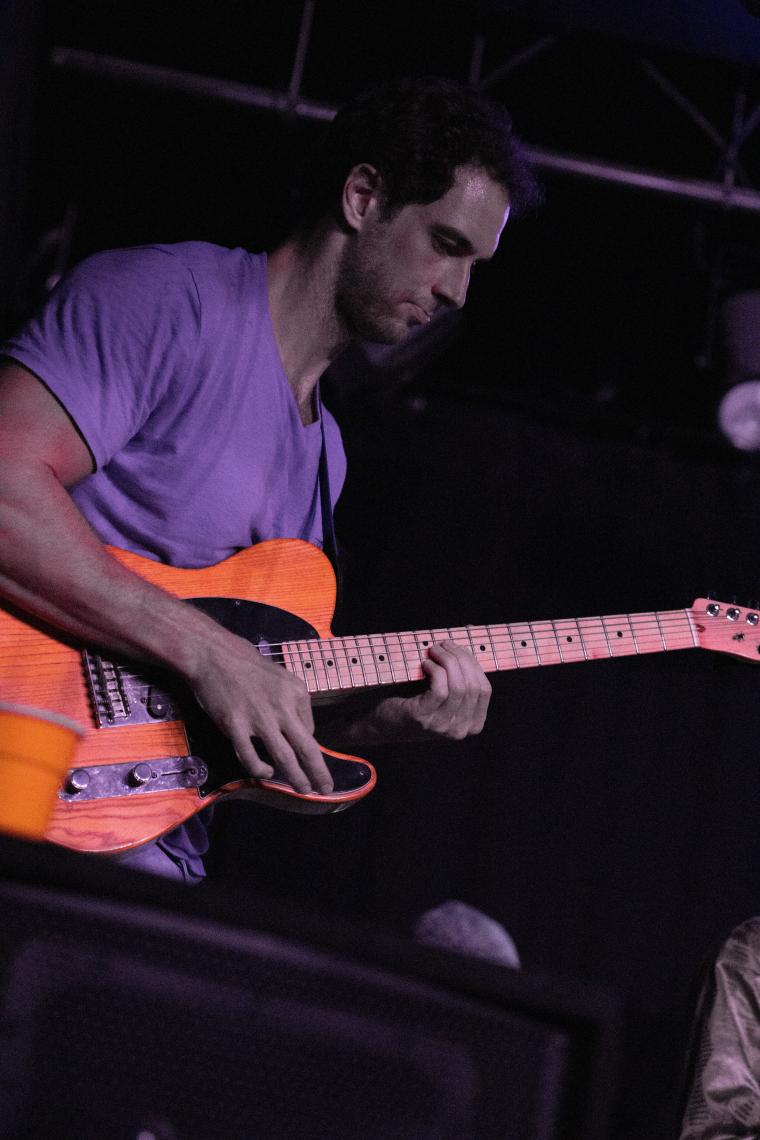 Bassist Tom Ogunribido, from Lagos, Nigeria, works as a dancer at El RastaSalsa Dance in Denver, so one wouldn’t be surprised to be told that he’s got a bit of salsa in his bass. (Again, sorry.) Guitarist Jonnie Cohen, who presumably got his Jazz Guitar Performance degree from the University of Iowa some time ago, sounded like he had keyed in to the Mainline and Osibisaba styles of Ghanaian guitar-work from Jump Street. Keyboardist Solomon Goldbas, born in Clinton, New York, now living in Boulder, provided thrusts of sound off his unit (was that a Fender Rhodes? Oh, well), and provided a minor-key classical-sounding coda at the end of the song “Cross”. Trumpeter Brad Goode, from Chicago, now in Boulder, evinced a Latin influence in his playing, and it would not surprise one to hear he plays especially well against Ogunribido’s basslines. Saxophonist John Gunther, who’s ensconced in Boulder, but spent a period in New York’s downtown music scene, is a multi-instrumentalist who also demonstrated his facility with the flute during the course of the show. His sax-playing emphasized taste over flash, and emerged from the on-stage ensemble like a player who had left the farm leagues in his rear-view mirror long ago. 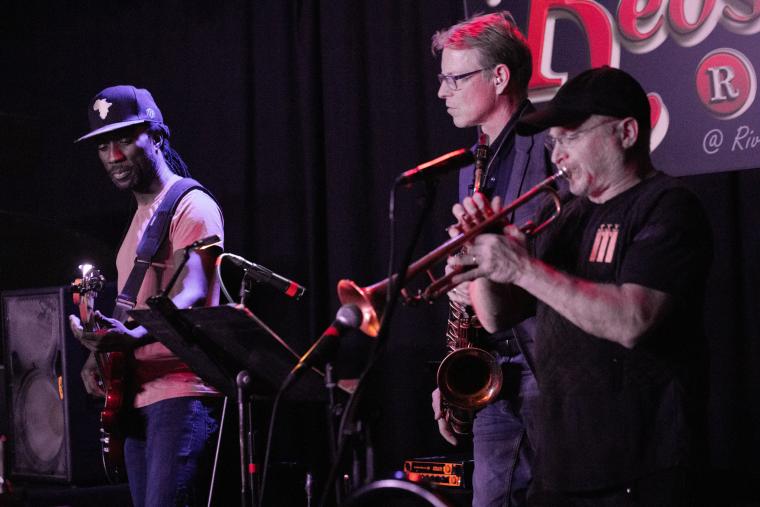 Paa Kow and His Afro-Fusion Orchestra’s latest release is “Nkwa Na Ehia” (trans “Life is What We Need”) released earlier this year. Visit his website for more information on his work at https://paakowmusic.com/.