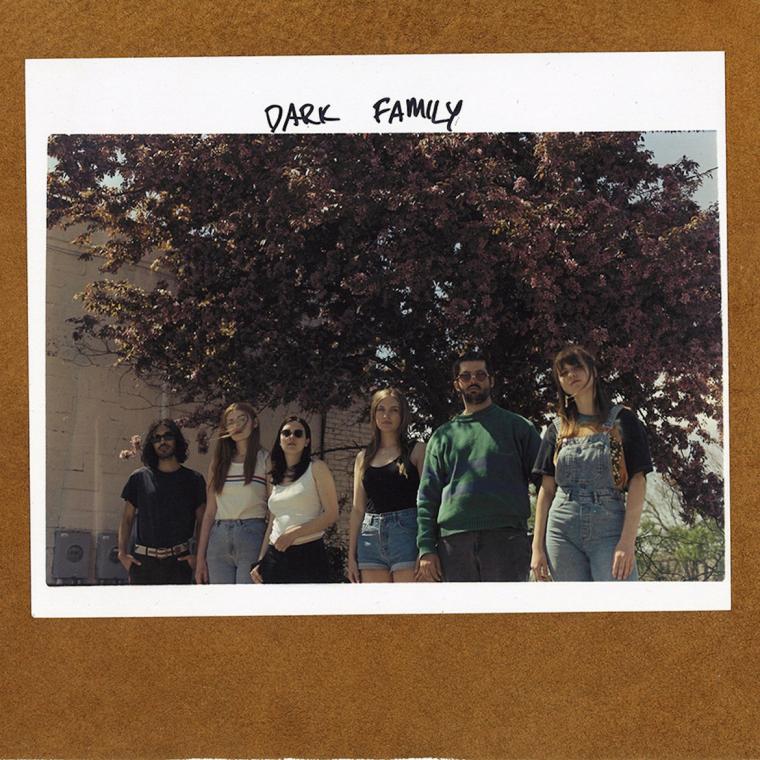 The last time Moline-based psych-garage-rock/jangle-pop band Dark Family showed up in the Reader, I covered their prolific musical output during fall 2020 – a period in which they dropped no less than three full-length albums, no doubt due to having some extra time on their hands in the more locked down social landscape back then. Those three records – Mary's Sonic Six, We All Fall Down, and Coronaroma – felt a little bit like collections of outtakes and more informal recordings, partially due to the somewhat lo-fi production aesthetics and partially due to the sheer amount of music itself, which could blend together to some extent, though not in an unpleasant way, if taken all at once.

Dark Family's approach to songwriting emphasizes the viiiibe more than anything, maaannnn. It's easy to get lost in their recursive guitar curlicues, their overdubbed layers of effect pedal haze, their slow and loping rhythms. The vocal melodies, even the quality of the vocals themselves, channel British Invasion-era songwriting, often landing somewhere between George Harrison and the Zombies, but maybe somehow even more red-eyed and zoned-out than those touchstones. The whole atmosphere communicates the feeling of being stoned on your porch with your friends on a sunny day, with nothing really on the schedule other than maybe getting some food later, maybe going down by the river – definitely playing some tunes, though. If any of this sounds derogatory, it shouldn't. Sometimes you need exactly that level of low-stakes, too-high-to-die type music to chill out with. Vibes are important in this day and age, and we will gather them where we can find them.

Which is why Dark Family, the band's self-titled album that landed in September, comes as a lovely surprise, not only for the vibes it brings into our lives, but for the evolution of the band's sound into a whole 'nother branch of the vibe. They've really stepped up both their songwriting and production games, peeling away some of the lo-fi haze and the more languid song structures to reveal the most direct, tuneful compositions I've heard from them yet, all presented at a level of clarity that marks a turning point in their catalog.

Tracks such as "Gimme Some More" benefit from marked shifts in their tempo and levels of intensity, starting off with more chipper, major-key riffing, like something you might hear on a Stealers Wheel or Steve Miller record and then sliding after each verse down into a sudden dip in speed coupled with a more eastern-inflected stoner-rock-type tonality – a songwriting move that almost simulates that moment when the dose kicks in. The band's boost in production clarity benefits the bass perhaps more than any other element of the band's sound. With a proper low end on these tracks, everything bumps a little harder, elevating any given track from something you might put on in the background and drift along with to something you could get up and dance to. I'm sure the band's live shows pretty much always fall into the latter category, especially with the bass and drums there in the room with you directly compelling you to groove, but now that sensation comes across in the recordings as well.

Dark Family's album centerpiece "In the Dark (Myriam's Sun Rising)" stretches out into eight minutes of lysergic, blissed-off riffing that sounds like the Byrds playing krautrock – two bright, chirpy guitars weaving together and breaking into counterpoint leads on either side of the mix while the rhythm section keeps things nice and simple with a tightly looped lock-groove. The shifts in tempo come even more unexpectedly and more often on this one, as the band has more real estate to spread out and wind through multiple suite-like sections: the upbeat central riff that chugs along at a nice clip, and the narcotized verses which essentially put the same riff through a swampy molasses filter and add a few more chord changes, before the band wakes up and blasts back into gear. Special shout-outs to the guitar tones on this track, and across the whole record, really, which glisten with detail and fine-grain texture, managing to sound thick and buzzsaw-heavy with what sounds like primarily amp distortion, without over overwhelming the mix. In the moments in which one of the guitarists leans in to take a solo, more specific effect modulation with phasing and tremolo makes sure that the tone cuts through and shines in contrast with the other guitar layers.

At the end of the day, Dark Family have proven perhaps more effectively than ever that they know how to write catchy-ass songs. The words might not always be completely legible, especially when the vocal production gets a little more 'verbed out and wispy, but that doesn't matter, because the melodies are always strong enough to carry the mood and catch our attention. On "To the Point" (which I could have sworn was a cover of CCR's "Proud Mary" upon hitting play), the voices tell us that "it's all in your head / and you have tripped out the whole season" – yet it sounds like more of a nice assurance than any sort of accusation. Like, “Hell yeah, that sounds like a nice way to spend the season, to be honest.” I always wonder if bands that orbit in this psych-rock/jangle-pop/garage-pop-type sphere get tired of being compared to the Beatles. If so, I apologize in advance, but there are moments in album closer "They Doesn't Know" that really show off the multi-part, Beatles-esque harmonies á la "Because" – making the most of the band's six-piece membership to achieve some lovely, layered vocal lines, with some members getting into the sustained wordless "oooohs" and some holding down the drippy central melody. Nice work, team.