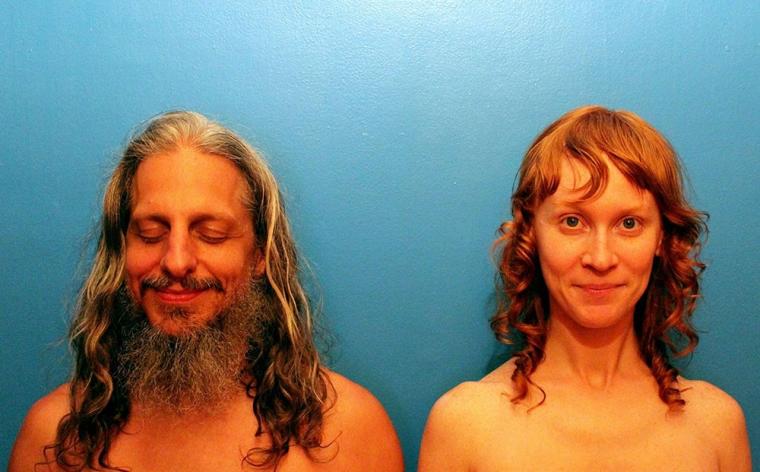 The music of Darsombra requires some room to stretch out. The Baltimore duo’s recorded output consists of extended sessions that regularly stretch well past the 20-minute mark as they work their way up from expanses of hushed ambient synth drone all they way across the spectrum to heavy, distorted metal riffing. Along the way, their pieces typically encompass passages of melodious electric-guitar soloing from Brian Daniloski and protracted percussion passages focused on the gong playing of multi-instrumentalist Ann Everton. The band’s two members each bring their own wide toolboxes of instrumental-performance ideas and electronic-manipulation strategies to the table, to the point that their work takes on a slow building, collage-like quality. Each segment of a given session typically airs out its ideas for a good five-minute chunk before some cue transitions the band onward to the next level of intensity. While the duo sink into passages that approach complete stasis, allowing listeners to zone out for a while, their sessions prove quite dynamic in terms of narrative motion when viewed from a zoomed-out perspective. Darsombra programs music for the long haul, achieving an almost symphonic scope with distinct movements and staggered climaxes.

The duo’s 2016 album Polyvision consists of two pieces that serve as the flip sides of a psychedelic-rock coin. Side A, “Underworld,” percolates with interlaced guitar leads and maintains a modal harmonic cloud that slowly sinks into the waves by the piece’s end. Side B, “From Insects … to Aliens” streaks off in the opposite direction as it builds from a bedrock of already distorted guitar chords up into wailing stoner metal riffs that land like a more subdued version of Sleep or Electric Wizard. Darsombra’s most recent release, a 41-minute suite of an album titled Transmission, foregoes the segmentation of the two realms of performance showcased on Polyvision and throws it all straight into one behemoth track. Gentle percussion loops and dry guitar licks grow from nothingness into a passage of zoned-out vocal chanting, before the real heavy guitar comping kicks into gear. By the track’s halfway point, the duo have crested into more triumphant psych-guitar pyrotechnics. Their live set, like their albums, unfolds as a series of long, slow breaths that build in intensity piece by piece to their breaking point.

Coloradan indie-rock band Dear Rabbit makes jangly, guitar-focused songs that derive their personality from frontman Rence’s rowdy vocal delivery and the flourishes of more progressive songwriting that creep into the group's fast-paced song structures. Its 2018 album Shy, self released on cassette, has moments that sound like a subdued version of Crazy Horse (“Hawthorne Bridge”) and others that benefit from a faster pace and crunchy guitar interplay (“Nice Doggy, I’ll Listen to You”). The band bills itself as “experimental,” and while the musicians don’t necessarily take huge risks in their chosen instrumentation or in their song structures, there are some tracks that flirt with sublime weirdness. “Oh! How I Love Dogs Like That” seems to crumble in real time through its ramshackle arrangement, as Rence croons in his idiosyncratic, deep-throated style, stuttering through a cappella breaks in an off-the-cuff way that recalls early Will Oldham/Palace Brothers records.

Peoria’s stoned and zoned rockers The Golden Fleece released a new album since the last time they appeared in this publication Mind Mirror, which landed this past April, trades in a measure of the band's electrified psych rock inclinations in favor of a quieter, more refined songwriting style informed by baroque folk music and indie rock. Album opener “Arrival” is built on a complex American Primitive-style fingerpicked guitar line, and features upper-register vocal harmonies that wouldn’t feel out of place on an early Fleet Foxes recording. When the electric guitar and bristling violin lines join in with chiming layers of harmony, the result approaches British folk-jazz units such as Pentangle or Fairport Convention. The nine-minute album climax “Behold/Nightfall” picks up the energy as it switches from breezy, proggy guitar workouts into more distorted psych riffing, all the while giving the rhythm section a chance to shine alongside the six strings’ output. When the track breaks down into pure ambient synth drift, it seems like it’s winding down to the coda, but the passages of heavy, synchronized shredding at the end take it home in satisfying fashion.