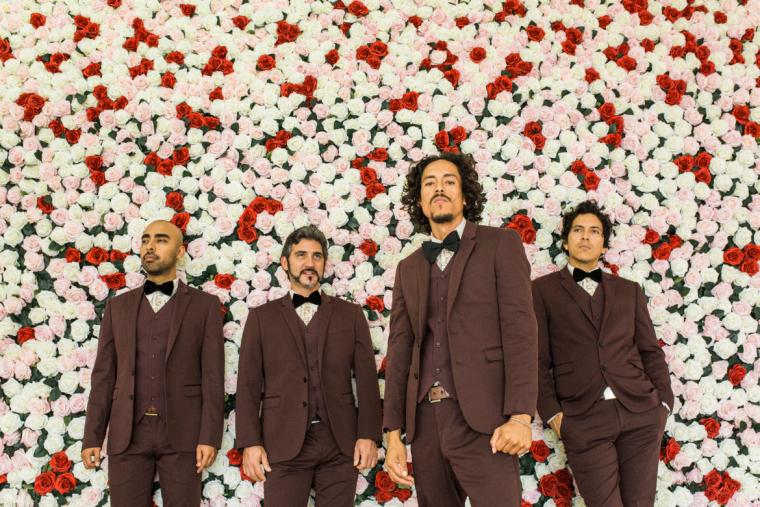 Lurking underneath the unfettered joy of Chicano Batman’s version of Woody Guthrie’s “This Land Is Your Land” is a tension. The performance and enthusiasm could not be more infectious, but ... it was created for a whiskey commercial (for Johnnie Walker) that aired during this year’s Grammys. And it was released two days before the inauguration of President Donald Trump and implicitly exposes the song’s political roots.

And therein lies the track’s magic. It’s so fully convincing that it doesn’t feel like selling out. And you won’t catch a whiff of protest from it, because the unwavering brightness is the protest.

The Los Angeles-based quartet with the great name – playing Daytrotter on June 30 in its first Iowa show ever – is having a breakout year, with that commercial exposure followed by the release of its third full-length, March’s Freedom Is Free, which has garnered strong reviews and generated substantial buzz.

It’s not hard to see why. The first album the band recorded outside a home studio, its first with a producer (Leon Michels), and its first to take more than a few days to cut, Freedom Is Free is a wide-ranging fusion of classic soul and modern sensibilities. The textures range from sunny psychedelic pop to goofy Spanish-language funk to the atmospheric closing instrumental, with the politics sometimes blunt and sometimes buried.

The album’s cover features a dominating, haloed figure with arms to the sky rising above a collage of war, oppression, and death. The record’s title track reflects something similar, a message of personal empowerment and transcendence despite the turmoil.

“It’s just a spin on the slogan ‘Freedom isn’t free,’ which attaches war and violence to freedom,” explained guitarist Carlos Arévalo in a recent phone interview. “It essentially says you can’t have freedom without those things taking place. We beg to differ. We believe that freedom is an inherent thing, and that it’s something that we all have within ourselves. ... There are people that try to manipulate the dialogue and make you think that that’s not a possibility. ... And that causes a lot of pain and suffering on people.”

Despite its positive message, the band – which also features singer Bardo Martinez, bassist Eduardo Arenas, and drummer Gabriel Villa – isn’t oblivious to suffering. “La Jura” is a song about the death of a citizen at the hands of police, but even then Chicano Batman has a light touch. While the lyrics pull no punches (“Those who must protect / Do the opposite / They kill innocents”), they’re sung in Spanish, and the sleepy treatment – dominated by harpsichord and keyboards – largely obscures the message for people who don’t know the language.

The song was intended, Arévalo said, as the “first Spanish-language Black Lives Matter ballad.” He said listeners can translate the lyrics on the Internet, “or you can just enjoy it as a pretty song with some good melodies.”

There’s no mistaking the message of “The Taker Story,” however – a Nick Cave-style litany of human-created problems that includes slavery, genocide, and environmental destruction.

The forcefulness of that track is an outlier, however, and the overall mood of the album is warm – a function of its soul roots.

“We’ve always been fans of soul music,” Arévalo said. “It’s always been a thread in our songwriting. ... I felt like this was the first time where it made sense to fully explore that type of aesthetic.”

The band’s members have long cited the influence of southern-California’s low-rider culture, he added. “That’s just something we grew up with. And for whatever reason, we just tapped into that vein when we were writing this record. It felt natural for us to finally explore that avenue fully and just create an album that we wanted to make for a while, but for whatever reason we didn’t get to it until this time.”

It helped to be free of the burdens of recording, engineering, and producing the album themselves. “When you have a producer come in, it can help you cut the fat off and make the songs more lean,” Arévalo said.

“We felt like something special was happening. ... We were just in a place and time where we got to focus completely on the music, which was something we had never been able to do before. ... We were there for one reason only: to write and record the best songs we could.”

And after the album was finished early last year, “This Land Is Your Land” popped up.

“That’s such a difficult song to re-create,” Arévalo said. “We felt, in the end, it was probably best to completely re-create the arrangement save for the lyrics and just make it our own. ... We spent a lot of time on it. We came up with three to four arrangements of it – completely different. ... I think we were able to do it justice and still have people appreciate it as a stand-alone new thing.”

And although the band was hesitant to do a liquor commercial, it was too good an opportunity to bypass – for Chicano Batman, certainly, but also for the benefit of other Latinos.

“Here’s an ad company, and a liquor company, that wants to give us this opportunity to show who we are in front of such a big audience, which doesn’t come down the pipeline very often for people of color – especially Latinos,” Arévalo said.

“We felt like the good outweighed the reservations. ... At the end of the day, we felt like it was an opportunity that could open doors for more people. ... It hasn’t been made for people like us to be seen on a mainstream level, and we’re hoping to change that.”

And it just so happened that “This Land Is Your Land” works phenomenally well as a gently political companion to “Freedom Is Free” – with both celebrations in the face of an often-hostile political climate.

“It’s weird how they both kind of worked out to be an A and B side,” Arévalo said. “It wasn’t intentional; it’s just the way the universe works.”

Chicano Batman will perform on Friday, June 30, at Daytrotter (324 Brady Street, Davenport; Daytrotter.com). The 9 p.m. concert also features The Golden Fleece, and tickets are $12 in advance and $15 at the door.