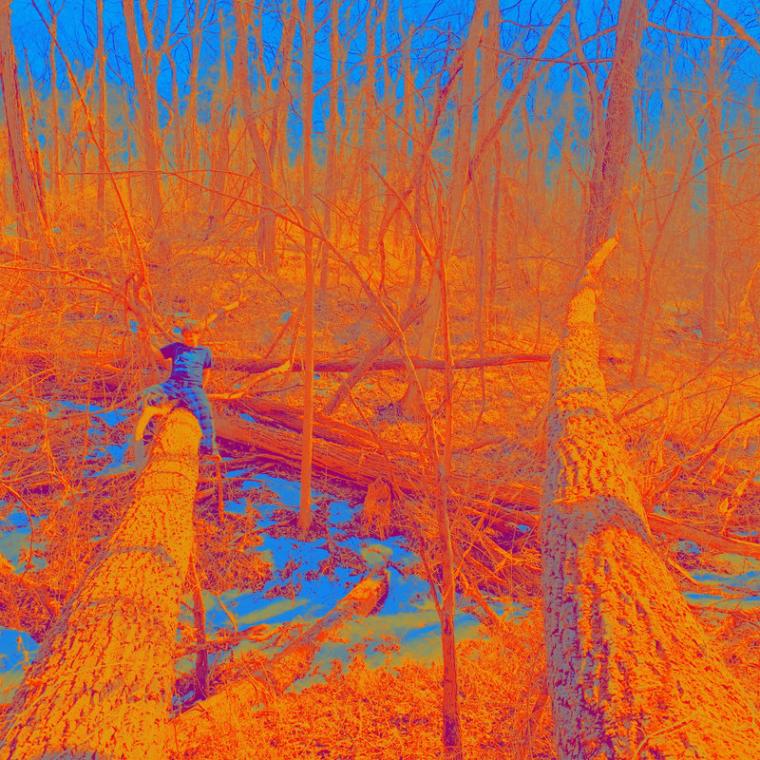 Davenport-based psych-rock power trio Giallows have been pumping out a steady stream of studio-recorded material, live shows, and odds and ends on their Bandcamp over the last couple years. Their newest recordings from April 2020 include the full-length release Enochian Power Ballads that features three improvised jams in the psych/stoner rock vein, and the standalone single “The Sun Falls Down (Plague Music)” that falls closer to a surreal collage of horror-movie music and somber poetry.

Giallows bills Enochian Power Ballads as an “improvised space opera,” and they’re certainly not far from the mark. The three tracks, all of which stretch past 20 minutes, carry a sense of heavy bombast and take their time to spread out across a litany of scuzzy grooves in the spirit of raucous stoner metal. The songs’ improvised genesis becomes evident in their tendency to lock into long stretches of repeated riffs and almost tantric, kraut-rock influenced stomp. Credit is due to the band’s simple yet effective production style here, which sets guitar and bass on opposite sides of the spread, separated in the middle by the competently produced drum-kit performances.

To their credit, the band knows how to avoid getting into ruts of overly repetitive material within the context of very long improvised sessions. No member of the trio ever sits still within these jams, as each of them constantly teases out new spontaneous riffs and tightly intertwined bouts of rhythmic interplay. Like any good improv ensemble, they know when to dip the intensity down a little bit between big climaxes of guitar shred. Some of the album's most thrilling moments come as the massive peak after a more subdued segment that finds the band peeling away some of the distortion and crunch in favor of a more percolating slow burn. These moments give even more fuel to the towering riffs that follow them, as if to remind listeners for a little while that the band’s strain of psych rock isn’t all bong rips and power chords: Sometimes they like to get a little weird and atmospheric with it, too.

According to the credits listed online for “The Sun Falls Down (Plague Music),” the song is the work of band member Devin Alexander all by his lonesome, abetted by a sample of wind from Lucio Fulci’s classic giallo horror movie Zombi. The track really makes the most of that wind sample, spending about two of its five minutes letting that wind loop through our speakers, punctuated only by a solitary kick drum. When the track gets into the meat and potatoes of its structure, a spread of panned samples of guttural barks, sobbing, and maniacal laughter hit us from all angles, while the center of the mix becomes the site for a somber, spoken-word reading by Alexander. His lyrics return to the central anaphora of “and the sun falls down” after each line he intones, hammering in the apocalyptic, mournful atmosphere that the samples first helped to generate. The poem, undoubtedly inspired by the global pandemic given the track’s release date (and not so subtle title), focuses on crumbling and decaying elements of society: garbage piling up, funerals, the setting sun. Bleak fare, for sure, but no surprise coming from a band that named themselves after a genre of Italian horror film.