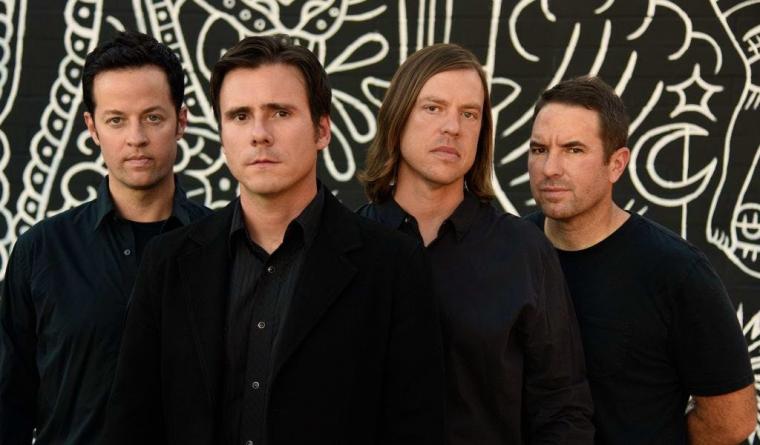 Pop-punk veterans Jimmy Eat World perform at the Rust Belt on November 8 on a tour supporting their newest LP Surviving.

The word “timeless” gets thrown around plenty to describe evergreen music that seems to float outside of today’s trends. The kind of jams that always warrant a return with fresh ears, regardless of whatever new styles have taken over the charts in the interim since their release. Arizona-based power-pop/punk band Jimmy Eat World makes music that fits a different definition of timelessness. Their tracks escape the flow of the ages by managing to conflate so many eras of human development by way of their effervescent spirit and their youthful energy, even though they’re delivered by a band that has been in the game for almost thirty years. The band sidesteps the brand of forever-in-high-school lyrical content still pumped out by flagships like Blink 182, who sketch out a somewhat creepy. Matthew McConaughey-esque “I get older but they stay the same age” mentality (and have done so since that band’s earliest releases, when they were already firmly in their 20s). Jimmy Eat World conjure a sense of simple, cross-generational bliss by way of the fundamental elements that constitute their songs: sugary melodic hooks, dynamic multi-guitar arrangements, and a honed sense of narrative development.

From the moment they fully broke into the mainstream in the early 2000s, Jimmy Eat World were perhaps unfairly lumped into the glut of pop-leaning bands that pulled tropes of emo rock, Cheap Trick-style arena rock, and punk from their toolboxes. Far from the willfully raw, emotive yelps that emerged from the microphones of bands such as American Football and The Get Up Kids, Jimmy Eat World always brought a theatrical, professional flair to their vocal arrangements. Lead singers Jim Adkins knows how to craft an earworm melody, and possesses the vocal chops to actually rise up and down the scales as he sings, instead of harping on monotone clusters of notes or banking on an idiosyncratic delivery to back up what could be considered otherwise pedestrian vocal lines. The band’s initial rise on the strength of their immortal 2001 hit “The Middle” came into being due to the song’s seamless, rapid-fire cadences and multiple interlocking hooks. While “The Middle” might have developed into the kind of track that would overshadow the band’s many other Billboard-worthy hits – the kind of song that they begrudgingly play as the finale of a set that they know so many audience members had patiently been expecting – the fervor of the Jimmy Eat World fan base ensures that the track remains just another banger in their arsenal.

Take, for example, the other tracks that hit the airwaves around that era of the band’s output — and the memorable entries that made their 2007 album Chase This Light their highest charting album to date. “A Praise Chorus,” from Bleed American, hits with a fleet-footed verse melody ornamented with stuttered syllables and high notes that stretch almost to the falsetto range. When the pre-chorus hits and the guitars take a step down into the lower register, the sense of narrative flow locks into place. Here is a band that isn’t afraid to cram their song structures with melodies that would probably each constitute their own discrete songs in the hands of a lesser band. Similarly, the excellent “Sweetness,” perhaps their second-most widely recognized song after “The Middle,” flies right out of the date with some towering, hooky bellows that immediately implant into your brain. The band’s sophistication in guitar arrangement comes into view here, as the distortion pedals kick on and the six-strings pump out chord progressions that subtly vary the harmonies already implied by the chorus. The effect is one of motive introduction and quick reconfiguration, as the voices cast off new melodic flourishes against the shifting context of the guitars. “Big Casino” from Chase This Light doubles down on the arena-rock influences that would come to further captivate the band up to the present day. The song utilizes tropes like gang vocal sing-a-longs, heavy major key progressions, and kinetic snare rolls to ramp up the energy throughout its unfolding structure.

The question becomes: What does Jimmy Eat World’s newest music, released on 2019’s LP Surviving, have to offer to a pop/rock landscape where their brand of bombastic vocal songwriting has become increasingly commonplace, after the contributions of five-years-removed chart-toppers such as Fall Out Boy or Panic! At The Disco? The answer is: plenty. Surviving, which just landed in October, builds on the template of the band’s previous albums as it showcases Adkins’s voice as it keeps the guitar riffs churning and threading together into striking harmonic backdrops. Album opener “Surviving” bumps over start-and-stop guitar chords and a loping drum beat that allows the lead vocals to float between the cracks in counterpoint. Highlight “All The Way (Stay)” fully commits to the kind of bright, chunky power chord riffs that covered the airwaves in the 80s, before shedding any semblance of machismo for its sticky sweet chorus. As a whole, the album reinforces Jimmy Eat World’s status as a forerunner of affecting, expertly crafted pop rock that knows exactly when to pull its punches and when to make a lunge for those heartstrings.

Jimmy Eat World plays the Rust Belt at 8:30 p.m. on November 8, admission is $30-35, and more information and tickets are available by visiting TheRustBeltQC.com.