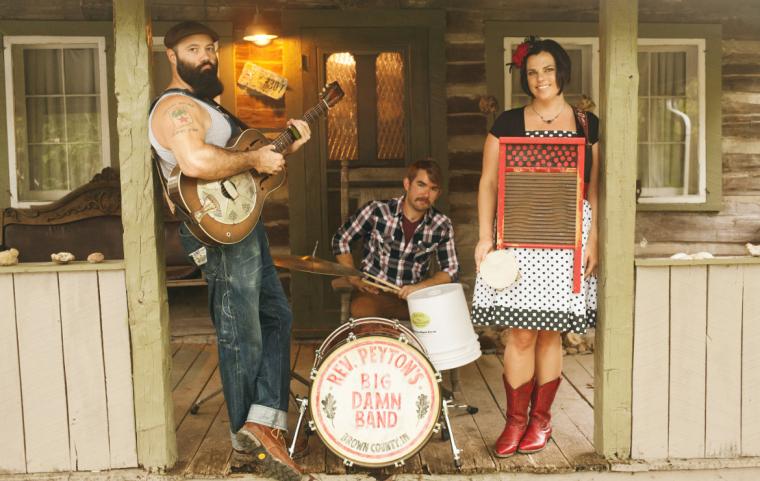 A casual listen to The Front Porch Sessions, the new album from The Reverend Peyton’s Big Damn Band, will likely prompt some confusion.

There’s that deceptive name, which purposefully disguises the Indiana-based trio as something larger. And there’s the fact that the guitarist/singer/songwriter Reverend (born Josh) is augmented ever so lightly on the record by his bandmates – wife Breezy on washboard and Maxwell Senteney on drums. The Big Damn Band sounds downright small.

And then there’s the laid-back-country-blues style, which masks the difficulty of the Rev’s playing. If you didn’t know that Peyton simultaneously plays both the bass and lead lines on his guitar, you’d swear there was at least one more member of the Big Damn Band. It doesn’t seem possible, for example, that there isn’t an upright-bass player on “Cornbread & Butterbeans.”

“It’s 100-percent me,” Peyton said in a recent phone interview. “That guitar has such a deep thump to it that it just kind of turns out that way. We almost thought it sounded like a cello.”

When the band headlines the first day of the 2017 Mississippi Valley Blues Festival, of course, all of those things will be readily apparent. More importantly, audiences will see how successfully Peyton merges an old-time style with his personal songs and a depth and intensity of feeling.

Although The Reverend Peyton’s Big Damn Band is undeniably a country-blues outfit, the vibe of The Front Porch Sessions is nearly ecstatic, without even the slightest hint of wallowing. “We Deserve a Happy Ending” kicks things off, with its determination to defy blues clichés reflecting simply the treasures of love: “We deserve a happy ending. / It’s been real since the beginning. / Even when we’re losin’ / It feels like we are winning.”

And it closes with “Cornbread & Butterbeans,” a joyous up-tempo number celebrating the routines of rural life.

The album doesn’t avoid the blues’ typical subject matter, but there’s something elusively positive that buoys it. The deep-vibrato singing on Furry Lewis’ “When My Baby Left Me” conveys strength despite the heartbreak. The guitar and singing on the should-be-bleak “One More Thing” – “Just one more thing / And we lose our house” – have a matter-of-fact clarity, with no worry, self-pity, or anger within.

And those tracks are balanced by pure pleasure. “Flying Squirrels” is just two instrumental lines – lead guitar and bass – darting all over the place. “The finger-picking on that one is nuts,” Peyton said. “I’ve never really heard anything quite like it. I was trying to really push what is possible on country-style blues guitar. To go beyond just a simple syncopated bass rhythm into a more-complex running bass line at the same time while I’m playing melodies on my fingers.”

Similarly, Bob & Miles Pratcher’s “It’s All Night Long” is endlessly playful, with Peyton’s guitar being egged on by hoots and hand claps as the tempo steadily accelerates. “That’s what’s sometimes referred to as a pre-blues fiddle song,” Peyton said. “On that song, I’m playing basically both the guitar part and the fiddle part at the same time on resonator guitar. I don’t know anybody that’s ever really done that before.”

The light feel of the record was the primary goal of the recording sessions, Peyton said: “My concept for it was simple: I just wanted it to be like if you were hanging out on the front porch. In terms of production, I wanted the guitar to be up-front. I wanted to go back to the earliest recordings of us. I wanted a record that was going to be very easy to listen to. I wanted it to be pleasing to the ears. ... I wanted the slide guitar to be very sweet, instead of stinging. ... Like having a lazy day on the porch. ...

There’s something bone-deep and authentic in the Reverend’s singing and playing that quite simply connects to people. That has allowed the Big Damn Band to find an audience beyond blues crowds – including, for example, opening for Flogging Molly and playing the Sturgis Motorcycle Rally and Bonnaroo. “We go play places in the United States, people lose their minds most of the time,” Peyton said. “Like a religious experience. It’s like a revival. ...

“I don’t kowtow to people. I’m not going to change who I am for a show. But what I usually do is I look at the crowd, I look what’s happening, and I also have to look inside myself that day. Some days, I’m just not feeling a certain song. I just don’t have it in me to do it. Particularly with country blues – it’s such a personal style of music. If you’re not believing it yourself – it’s not in you 100 percent – it ain’t gonna happen. It’s a multi-part thing. I have to feel like it’s right for the day and the show and it’s right for me, too.”

And that sometimes frustrates his bandmates. Peyton does prepare set lists, but ... . “I always joke with the band,” he said. “I say, ‘It’s just a road map. Subject to change.’ And they’re like, ‘You’re supposed to follow a road map.’”

The Reverend Peyton’s Big Damn Band will perform on Friday, June 30, at the Mississippi Valley Blues Festival (in Davenport’s LeClaire Park, 400 West Beiderbecke Drive). The festival continues on Saturday, July 1, and one-day tickets are $10 to $20. For tickets and more information, visit MVBS.org.