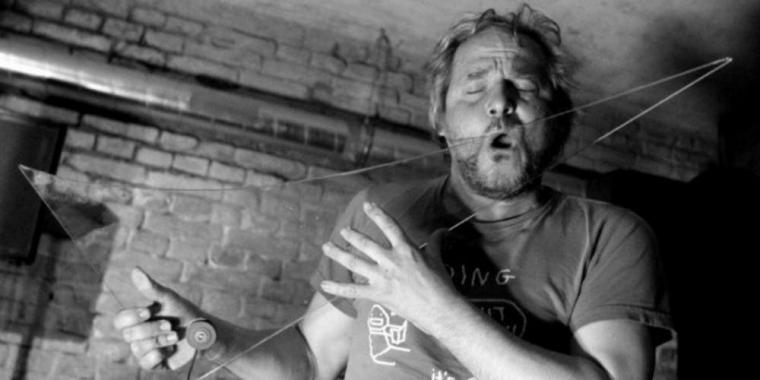 Revered noise musician, performance artist, and multimedia art maven Lucas Abela brings his most notorious project Justice Yeldham to Rozz-Tox on June 9. To avoid the risk of burying the lede, I’ll just say right away that Abela plays giant shards of broken glass as his primary instrument, pressing his lips straight onto them and blowing like some mutant trumpet sparked into harsh noise fury by his electronics.

Noise music is a lightning rod for hyperbole. “That was the heaviest thing I’ve ever seen,” your friends might tell you in a daze when they get home from the gig. “My brain literally exploded,” says someone whose brain is still clearly safe and sound inside his skull. Noise deals in extremes, from extreme volume and extreme harsh texture to extreme performance tactics that might involve atypical instrumentation, bizarre costumes or props, or physical movements beyond the normal people-standing-on-stage-playing-music paradigm. At the end of the day, music is not a contest, and the idea of objectively ranking what project is the “most extreme” is an absurd task fit for middle schoolers. But sometimes a project comes along that makes you think, “I really have never seen anything else like this.”

Within an expanding sea of underground artists, Australia-born noise music lifer Lucas Abela stands out as a shining example of what extreme performance can look like at its most captivating. Though he’s adopted many different monikers and performance styles over the years, his solo work as Justice Yeldham remains his most iconic project. If the idea of playing a giant claw-shaped pane of broken glass as an instrument doesn’t make sense to you, one second in the room during his performance will clarify things. Abela runs the pane of glass through a bank of effects pedals and electronics that amplify, distort, and generally mangle the tones that go into them. Almost similar to putting a piece of grass in your mouth and blowing that squeaky little whistle sound by emulating a trumpet player’s embouchure, Abela blows against the glass and produces tones that make it resonate at various frequencies which are then blasted to hell through his electronics. The result is at times a standing wail of ear-splitting noise chaos, and at other times a more nuanced set of individual bursts dictated by his playing decisions. Pictures and documentation of Abela’s performances often focus on the moments when he starts to bleed. Clearly, having your lips up against glass for the entire duration of a live set has its risks, and though he doesn’t intentionally aim to do so, Abela often bleeds from his mouth and from wherever on his face the glass might make contact. I’ve seen him play three times, and I’ve never seen him bleed on stage during performance – it’s simply a matter of chance when this happens. He regularly lubricates his mouth with vodka or some other alcohol to avoid any little shards from the rough edge of the glass pane sneaking into his skin.

If all of this sounds macabre, it is on some basic level. But the truth is that Abela knows exactly what he’s doing and approaches it from a very open, enthusiastic perspective. You won’t find him at a show scowling at the crowd, lurking in the corner, or emitting bad vibes of any kind. He’s totally approachable, and happy to talk about his performance and his many other wild art projects – which include, for example, a giant pinball machine constructed out of electric guitars and effects pedals that are triggered when the pinball hits them. His performances as Justice Yeldham don’t feel dark or frightening once you get past the initial fear that he is going to hurt himself, which he isn’t (at least, not that badly). Once you hear the range of sounds he can make with the glass and electronics, and can trace the narrative of one of his sets as it unfolds before you, you see that his performances are much more than a gimmick or an attempt to merely shock people. They feel more like a brilliant tinkerer or inventor showing us this totally unique talent that he taught himself, because it’s cool as hell and fascinatingly entertaining to witness.

Justice Yeldham headlines the June 9 bill at Rozz-Tox with sets by Systems and Bob Bucko Jr., admission to the 8 p.m. concert event is $10-13, and more information is available by calling (309)200-0978 or visiting RozzTox.com.