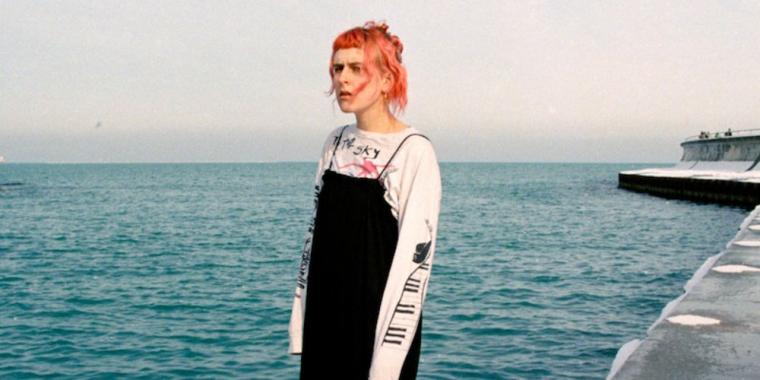 Singer/songwriter Lillie West helms the Chicago-based grunge-rock/dream-pop project Lala Lala (playing Rozz-Tox on January 21) from the persona of the disaffected slacker youth who is quite capable – perhaps secretly, and to her own chagrin – of putting in some serious work to untangle her life’s problems.

On the cover of her latest album The Lamb, released by independent-rock stalwarts (and Sub Pop branch-off label) Hardly Art, West stares off vaguely in the direction of the camera, not catching the onlooker’s eye, more disinterestedly surveying something happening way over there on the other side of the Lake Michigan pier that drips with piles of snow melting in the sunlight. While this image accurately captures one typical mode that West settles into for her vocal performances – that of the indifferent garage rock singer whose voice lands somewhere between a melodic whisper and a mumbled complaint at the world – this is only one trick up her sleeve. Her huge choruses, animated by a more howled, heavy vocal style and peals of noisy lead guitar, break the stereotype of the jaded slacker to reveal an emotional gradient that encompasses affection, rage, sadness, and confusion. The interplay between the muted verses and these towering chorus moments lifts West’s songwriting into far more surprising territories than many of her underground-rock colleagues. Clearly, she has carefully considered the trajectories of each of her songs and plotted out the emotional arcs they cast.

“Destroyer” opens The Lamb with some of the album’s most direct and affecting songwriting. The track’s production skates over steadily chugging guitar chords and a laconic beat, but hints of glockenspiel melody and chiming lead guitar echo somewhere behind the gritty foreground. In one verse, she sings, “I can feel myself, beginning to shift / what should I hold, I can’t resist” as if hinting at the sudden burst of emotion about to overtake the song. When the chorus hits, the song instantly lights up to a level hundreds of watts brighter. Her voice splinters into a double- (or triple-) tracked close harmony, soaring octaves up in piercing tones that seem to attest to some epiphany with the power to open up hearts and change minds. Her guitar work percolates with distorted layers alongside more of a straightforward jangle, as chaos living in direct contact with the mundane details of existence. More than just getting something off her chest and onto the page, into the microphone, or out onto the guitar fretboard, the songs of Lala Lala paint a rich inner world capable of being borne out into the real world in all its varied complexities.