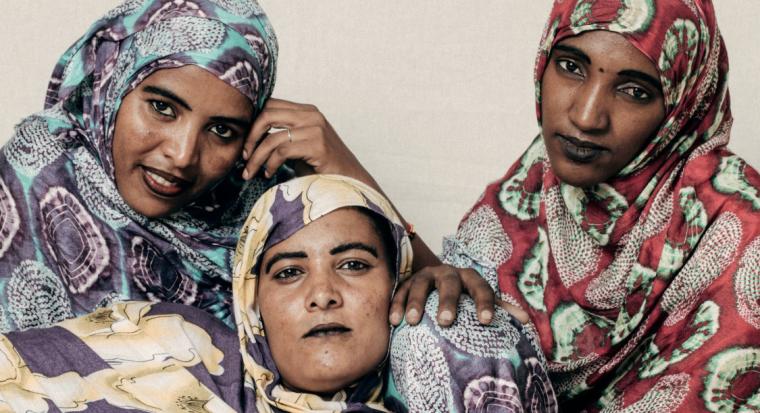 One of the flagship acts on the roster of ascendant Africa-focused label Sahel Sounds, Les Filles de Illighadad hails from a small town in central Niger. Over the course of their two LPs to date, the trio has developed its style of “tende” music that bridges the gap between Tuareg desert blues (think Tinariwen or Bombino) and a more subdued form of pastoral composition based around voice, guitar, and hand percussion. Tende is a form of music defined by women, as Sahel Sounds’ liner notes explain: “Collective and communal, tende is tradition for all the young girls of the nomad camps, played during celebrations and to pass the time during the late nights of the rainy season.” This communal sensibility emerges in the close harmonies and hypnotic, soul-warming melodies that Les Filles De Illighadad pours out of its instruments and shapes with gorgeous voices.

Bandleader Fatou Seidi Ghali, who taught herself how to play electric guitar in secret outside of the watch of a traditionally conservative, male-dominated musical culture, has come to be acknowledged as the first major female guitarist in the tuareg style. Offering a complement to the increasingly bombastic, hyper-electrified guitar acrobatics of Sahel Sounds’ most visible star, the stunning Mdou Moctar, the music that Fatou Seidi Ghali and her band perform percolates with a quiet intensity and a sense of deliberate restraint and minimalism. The songs of Les Filles de Illighadad often break into passages of sheer vocal beauty, delivered a cappella, before sliding their way back into cyclical guitar riffs and loping, handicapped rhythms. As with Moctar and other acts in the Sahel Sounds sphere including Afous D’Afous and Ahmed Ag Kaedy, the guitar lines that populate the songs of Les Filles de Illighadad seem to have no discrete end or beginning, tumbling out of the speaker in rapid-fire hammer-on phrases that loop back onto themselves and endlessly repeat while subtly deviating from their central figures. Its a style of guitar performance that requires both adept hands-on-fretboard technique, and a deliberate ear for slow harmonic development and zoned-in repetition.

At times, the trio shift the focus away from electric guitar and turn in tracks such as “Jori” from the trio's most recent LP, 2017’s Eghass Malan. “Jori” is built over a single acoustic guitar progression, which churns in place, hovering on a single two-chord vamp. Over this bedrock, Les Filles de Illighadad winds its way through a network of beautiful, closely knit vocal figures, which plant a more upper-register lead melody alongside droning one-note harmonies that highlight individual tones while serving as a kind of constant mantra to return to. Album closer “Telillite” shifts the spotlight back to the acoustic guitar, but the composition is more maze-like and sinuous in its construction, shifting through a knotty chord structure while maintaining a static pedal note rhythm. Here, the trio’s vocal harmonies are at their most haunting and spectral, cast off in a series of rising and falling lines that stack together in layers that highlight the grain and character of each singer’s voice.

Les Filles de Illighadad is one of many acts on the Sahel Sounds roster that exemplify the shifting landscape of contemporary Saharan music and its increasing presence in the cultural landscape of the Western world. Developed in the shadow of long-standing traditional forms, Saharan musical vocabularies remain intertwined with Western touchstones. Artists from Niger, Mali, and Senegal openly claim the influence of the fiery electric blues catharsis of Jimi Hendrix, the dry, crisp electric guitar tones of Mark Knopfler, and the two-hand tapping pyrotechnics of Eddie Van Halen. Meanwhile, Saharan musicians adapt technology such as cell-phone music apps to spread their work, and continue to experiment with electric guitar performance techniques, synthesizers, and electronic production.

Like Mdou Moctar, who at the time of this publication will still be on a tour of North America that spans over one entire calendar year, Les Filles de Illighadad has an opportunity to raise its profile more than ever with these U.S. shows. Yet they will do so entirely on the musicians' own terms, as ambassadors of their hyper-specific regional style with its own finely articulated vocabulary of tropes. In contrast to the narrative of increasingly modern uses of technology and “Westernization” of Saharan music, Les Filles embody a kind of stoic reverence for tradition. This reverence is not rooted in conservatism or willful nostalgia, but in the desire to continue to refine and develop a form of composition and performance that still offers so much for all listeners and musicians to learn, regardless of their location on this earth.

Les Filles de Illighadad plays Rozz-Tox on September 15 with an opening set by Shining Realm, admission to the 8 p.m. concert is $12-15, and more information is available by calling (309)200-0978 or visiting RozzTox.com.