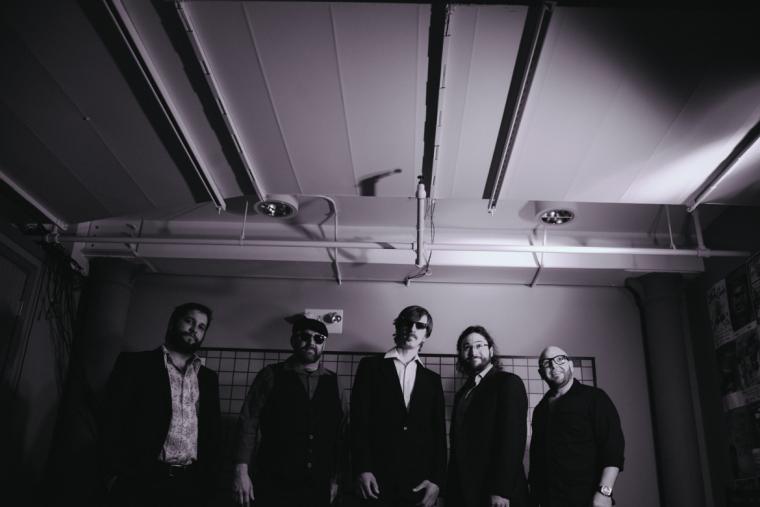 But within that framework, good luck picking out a track or moment that exemplifies it. It’s not the screaming guitar shredding at the climax of opener “Eine Metal,” or the warm, Bill Frisell-y lead on the country-ish closer “Blue Gracias,” or the gorgeously catchy keyboard-and-guitar breaks on the Latin-flavored “Sombrero Samba.”

And yet it’s all those things – by design.

As a side project to its members’ other bands – The Candymakers, The Gratest Story Ever Told, and The Uniphonics – The Low Down represented “an outlet for us to play the multiple styles we like and not really care where it was going or what people thought of it,” said keyboardist Nick Vasquez.

Vasquez said the group started four or five years ago as improv outfit, and as the lineup solidified, so did the songs. Some of the tunes on 7 grew out of concert improvisation, while others had their origins with guitarist Craig Heidgerken.

The guitarist, by virtue of being the band’s de facto frontman, is the star here, and from his first notes on “Eine Metal” it’s evident that he’s fully engaged; every note is thoughtful and purposeful.

He also has a strong instrumental rapport with Vasquez, whose impressive arsenal of keyboard sounds – often with multiple textures layered – provides a vital variety. Whether echoing, underscoring, or diverging, the album’s guitar-and-keyboard pairings are the kind of jam-band interplay that makes it easy to get lost in the music.

And the rhythm section – drummer Eric Wilson, bassist Randy Leasman, and percussionist Jamie Hopkins – is always active and involved. On “Horace on the Horizon,” each band member is given equal footing in the arrangement and mix to the point that they all sort of disappear into the locked-in groove.

The only problem with the album is its sequencing, as 7 kicks off with two eight-minute-plus tracks, and second track “Horace on the Horizon” has too similar a vibe to the next tune, “Defunked.” As a result, the front half of the album feels amorphous, with the jazz and funk melting together a touch much.

That’s especially in true in contrast to the two sterling tracks that close the record.

“Sombrero Samba” is the undeniable standout on 7, with each of its segments having a discrete personality. The first break – with Heidgerken’s guitar atop a surprising mellotron – is the sonic departure the album had been begging for. Smartly, the second guitar solo builds on the memory of the first rather than merely repeating it, and the mellotron is absent. If the track fits neatly into the album as a whole, it has a compositional and arrangement rigor that sets it apart.

And then there’s “Blue Gracias,” which leaps out for being uncharacteristically short (a tight three minutes) and for its honky-tonk leanings.

It would have done wonders as a palate-cleanser in the middle of the album, but at the end of 7 it serves an equally important function. Paired with “Sombrero Samba,” the tune makes me hungry for more.

The Low Down will mark the release of 7 on Friday, June 10, at Bent River Brewing Company (512 24th Street, Rock Island). The 9 p.m. show features Ronin, and cover is $8. The band will also play at the Dawn & On festival on Saturday, July 9, at Len Brown’s North Shore Inn (700 North Shore Drive, Moline).

The album will be available at shows, Co-Op Records, Ragged Records, and CDBaby.com.

For more information on The Low Down, visit Facebook.com/TheLowDownQC.