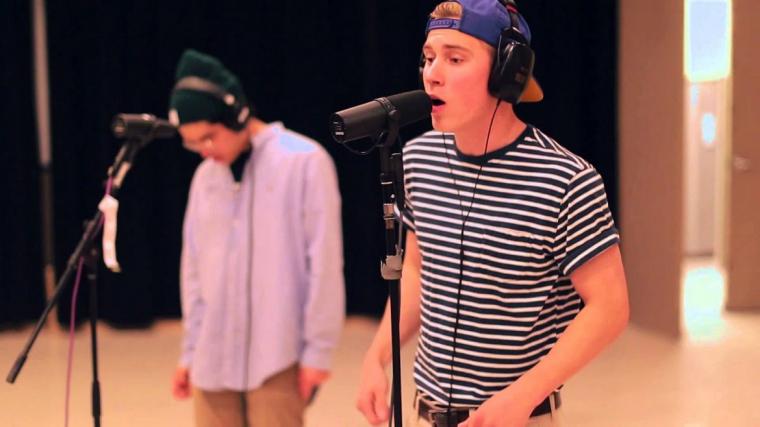 His debut album Love, Nostalgia – primarily produced by Taylor’s roommate Bobby Knepper – lives up to its name by layering the day-glo VHS aesthetic signifiers on thick with a cycle of songs propelled by syncopated drum programming, woozy funk-synth lines, and crisp, Nile Rodgers-esque guitar grooves. Taylor proves to be a compelling frontman over top of the yacht-friendly production, as he slides seamlessly from moody double-tracked crooning to a laconic yet still charismatic style of MC-ing. Knepper’s backing tracks orbit the Prince / Egyptian Lover / Dam-Funk lineage of dance production, in which Linn Drum tones and chubby basslines settle into the mix and loop indefinitely as synth layers shift around them, laying out the harmonic structures for Taylor’s vocal lines to trace.

The video for lead single “Orange Girl,” which dropped toward the end of last year, leans hard into the nostalgia factor with a muted color palette and willfully lo-fi video quality. Taylor stares wistfully off camera clutching a bouquet of roses, and calls a woman on his landline phone. Splash transitions and stacked picture-in-picture effects cement the throwback vibe, like we’re watching an alternate cut of the Brady Bunch intro through the lens of '80s funk pop. At one point, the woman fans herself with a vinyl LP as Taylor sings, “showed her all the music I love / then I had to go and get my feelings involved.”

The whole thing sidesteps the nostalgia-for-its-own-sake strain of “hipster” past fetishism on the strength of the song itself, which packs a surprising number of earworm hooks and memorable melodies into just over four minutes. The track shifts at its halfway point from a bubbly A section into a more smeared and dreamy B section buoyed by swooping, modulating synth lines. Taylor’s voice gathers some auto-tune/vocoder effects and builds into a web of cooed background harmonies and shouted ad libs that wouldn’t sound out of space on a Travis Scott track.

Album standout “Lavender” goes full J Dilla with its loping, un-quantized beat and bursts of chipmunk soul samples one step removed from Jay Dee’s “One For Ghost” / “Whip You With A Strap” or Kanye’s “Through The Wire.” Taylor uses the beat as a chance to show off a melodic toasting vocal style, confident and with real presence in the mix, between more overtly sung choruses that evoke Motown in the same way that Stones Throw veteran Mayer Hawthorne does, minus the falsetto.