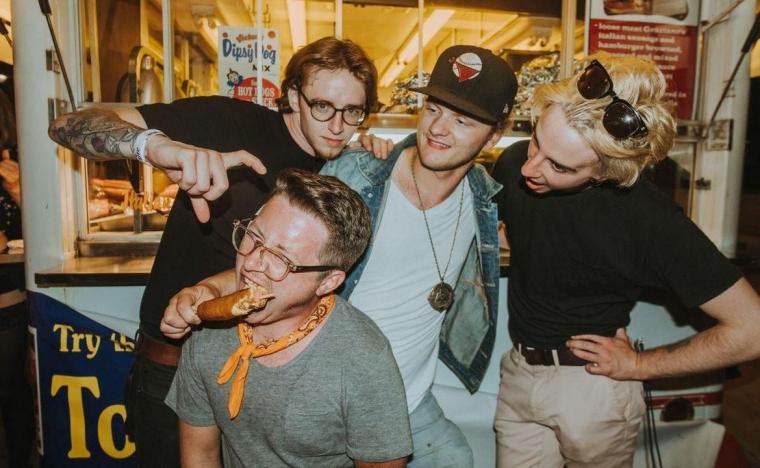 As a comment on their “City of Rain” video aptly states, “U can't call yourself the Hex Girls. Theirs already a band called the Hex Girls.” Indeed, it took me a minute to track down the Cedar Rapids band known as Hex Girls, because the search-engine optimization still leans heavily on the fictional band of witches named The Hex Girls who appear in Scooby-Doo. In a modern musical landscape in which band names are getting increasingly specific in their references (see: Chicano Batman, Yoko & the Oh No’s), or streaking off in the direction of normcore aesthetics (see: Soccer Mommy, Snail Mail), a band can be forgiven for choosing such a culturally claimed name. At this point, all band names have been taken. Also, there has never once been a good band name. Every band name ever is dumb as hell. But I digress.

Nomenclature aside, “City of Rain” from Hex Girls’ debut album More of That offers up a strain of soulful rock that culls from various far-flung traditions such as Max’s Kansas City-core proto-punk rock, Motown, and spoken word punky histrionics á la Gun Club. The song sketches out a dynamic pop narrative that moves from an almost '50s-ish skiffle backbeat out into a funky palm-muted guitar riff that carries enough swagger to hold our attention. The lead vocals channel Lou Reed’s half-spoken, manic diatribes, or the incensed rants of Iggy Pop, while creeping along at a vaguely funky, low volume whisper. Shades of beat poetry and charged Raymond Carver mundanity shine in the lyrics, with lines such as “the rain going pitter patter drip drop on a hot tin roof.”

Searing album opening “God Can’t Count” kicks off with an almost psychobilly energy, with heavy distorted riffs and a pummeling backbeat – landing somewhere between Deep Purple’s “Highway Star” and The Stooges’ “Raw Power.” The track breaks open with a wordless hockey rink chant that serves as a central hook, pushing everything closer to some kind of arena sing along. Speaking of questionable nomenclature, “Jet Black Elvis” rises above its name with its scuzzy surf-rock arrangement, build over start and stop guitar lines, and ghostly “oooooh” background vocals. The vocals here really take over the mix in a kind of yelped, nervous sing-speak that floats between chugging riffs and drum fills.

Clearly a post-internet combinatory aesthetic motivates Hex Girls to cram various influences from across the 20th Century into tightly packed rock songs, each of which channels a different era and style. Taken as a whole, the band’s album spreads out before the listeners like a kind of rock menu, with recognizable tropes popping out in succession and falling back into the mist. This is the sort of tactic that you could find on early 2000s albums by pop/rock songsters such as MGMT. But where that tradition leaned heavily on various electronic pop touchstones, Hex Girls cull more directly from rock with a capital R, as originally demonstrated by the Velvet Underground and their acolytes.

The band members themselves claim that they sound like “Iggy Pop and The Arctic Monkeys bathed in PBR.” One can imagine that a band out on the road in a tour van, having bathed in PBR, would not smell particularly good. But that’s probably exactly what Hex Girls are into. That, and boiling frogs in a cauldron in the middle of the woods, as the Mystery Machine gang watches from the shadows. Like zoinks Scoob, the kids are meddling again.

Hex Girls plays the Triple Crown Whiskey Bar & Raccoon Motel on July 30 with an opening set by Rookie, admission to the 7 p.m. show is $10, and more information is available by visiting MoellerNights.com.