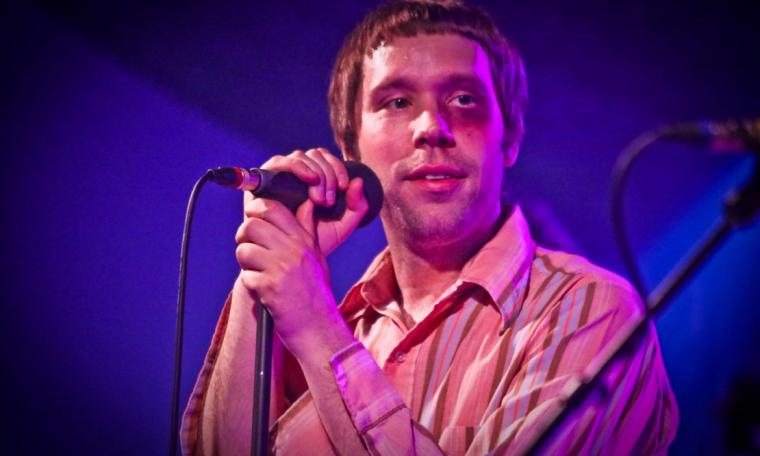 On the cover of Mike Krol’s most recent album Power Chords, which landed on indie juggernaut Merge Records earlier this year, he sits on a bright pink bed in a tacky little room wrapped in floral wallpaper. His shirt matches the bed, and he holds a blue guitar that matches his jeans. Everything seems pretty chill, except for the fact that he’s sporting a truly nasty black eye, and also seems to be staring into space, wondering what kind of trouble he’s gotten himself into this time. The image serves as a nice metaphor for his music: a brand of up-tempo garage rock that can turn on a dime from aggressive guitar beatdown anthems into more bubble-gum-y power-pop fare. When you start your biggest album to date with the hilarious line “I used to never understand the blues / Until the night I met you / And every day since / I’ve gotten better at guitar,” you set the tone pretty clearly for things to come. Here is a lyrical narrator who acknowledges his own role as a musician, his own inhabiting of the rocker archetype. Given this line, you wonder, “What will Mike Krol do to make himself stand out from the pack? If he’s painting himself as an almost generic rock dude on purpose, what does he do to fight against that image?”

The answer, it turns out, is a lot. Krol has a great ear for varying up his arrangements with surprising turns into contrasting levels of production fidelity, different levels of guitar distortion, and different tonalities all together. The aforementioned opener “Power Chords” rockets through a Marc Bolan-esque menu of different moods and riffs, from a chugging dinosaur stomp carried over handclaps, to passages of tinny guitar and vocals only, to a swirling guitar solo adorned with doo-wop “oooooohs” in the background. Krol’s voice isn’t too far from Bolan’s, come to think of it, as his vocal lines rise up in reedy melodies and whiny, upper-register snarls. The man knows how to write a good hook, and even if you can’t understand every line he tosses off due to his occasionally distorted vocal style, the words aren’t necessarily the point here. Unlike so many rock bands these days that claim to be in the lineage of, say, Nirvana or Weezer or Dinosaur Jr., Mike Krol actually knows how to sing a compelling vocal melody. People can claim the influence of Kurt Cobain or J. Mascis all they want, but until they can actually sing a melody that has more than three notes in it, until they can actually convey some semblance of personality through a microphone, I’m not interested. Krol gets there, in this sense.

Later on Power Chords, the towering “Little Drama” kicks the energy into high gear, coming off like a rowdy motorcycle on the road type jam, like Deep Purple “Highway Star” with the BPM pumped up closer to pump. Just when the song seems to be ready to implode into itself, Krol shifts gears for a more The Strokes-y hook carried over criss-crossed major chords and a pummeling drum backbeat. When “Left for Dead” starts, it seems like Krol is about to step into jittery, start-and-stop riffing in the school of Devo, but the rest of the song keeps the tempo blasted and the guitars continually grinding, landing somewhere closer to the brighter singles in the Queens of the Stone Age catalog. Shouts out to the song’s final moments, which chop and loop a single guitar chord into a stuttered riff that sounds like a CD skipping.