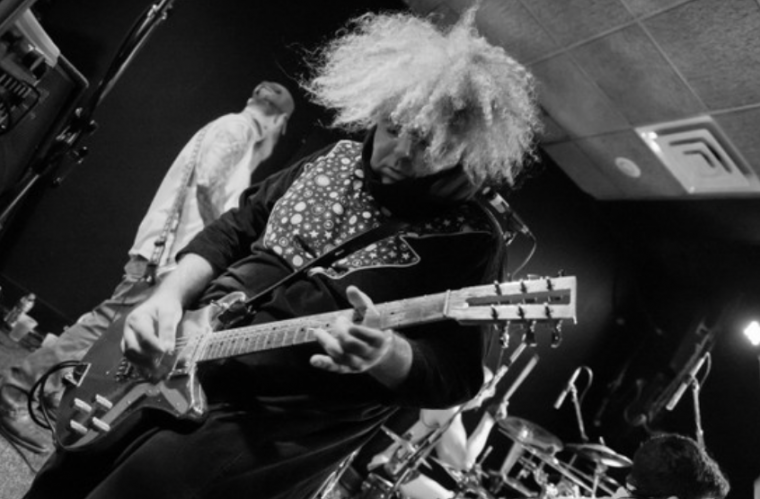 After thirty years in the game, one might imagine Melvins would slow down, burn out, or fade away. Having pioneered the grunge rock and sludge metal styles of the early nineties, and inspiring a wide-eyed young Kurt Cobain and his contemporaries to follow in their footsteps, the Washington-based trio (sometimes quartet) led by guitarist/singer Buzz Osbourne and drummer Dale Crover still show no signs of fatigue in 2017.

A massive US tour with more than fifty dates puts them in the Quad Cities at RIBCO on September 26, with Steven McDonald of similarly legendary punk outfit Redd Kross filling in on the revolving door bass slot. Their last local gig was photographed, here.

The group tours in support of their newest release, one of their most ambitious projects to date - an album comprised of two complementary volumes called A Walk With Love and Death. Though the album joins a catalog of twenty one LPs and an equal number of one-off live albums and compilations, Melvins finds new ways to push fans out of their comfort zones and challenge the limits of what their project can achieve.

The elevator pitch for A Walk With Love and Death is simple: one full LP of "classic" style Melvins burners, subtitled Death, and one LP of more wide-ranging, atmospheric tracks called Love, made to soundtrack a short film by director Jesse Nieminen. Deathhowls with the band's trademarks that fans have come to know and love. Monstrous highlight "Euthanasia" stomps through towering verses animated by Crover's tom tom beatdowns and Osbourne's soaring vocal leads. The track breaks into insanity in its second half, as a thick, distorted guitar solo takes over the mix and sears ears all the way through the coda. "Sober-delic (Acid Only)" creeps into existence over bluesy guitar flourishes before splitting open into a patch of gnarly guitar/bass interplay, escalating again into a slow-burning solo passage. Osbourne's massive, barked vocals harmonize with gang vocals from the rest of the band. Never one to shy from a good hook, his stentorian quasi-melodies flit between growled lows and operatic highs - landing somewhere between Judas Priest and KISS (both influences that Osbourne has acknowledged repeatedly).

Osbourne's guitar style splits the difference between Sabbath-style blues metal riffage and moments of downtuned, swampy mayhem, with sheets of feedback and textured throb draped behind Crover's intensifying drum fills and McDonald's pummeling low end. One could claim that this latter style, typically referred to as "sludge" or "drone metal" originates with Melvins' classic LP 1992 Lysol, later renamed to Melvins for copyright purposes - a 31-minute single-track odyssey that takes 10 minutes to rev up to anything resembling a proper riff, stewing in a static bog of feedback and molasses-slow chordal chunks. Without this album, 21st century metal luminaries like Sunn O)) and Boris (named after a Melvins song) certainly wouldn't exist as we know them, nor would swathes of imitators in the increasingly overlapped stoner metal / sludge metal pantheons.

The Love half of A Walk With Love and Death confounds expectations as much as Death fulfills them. More of a layered collage album than a rock jammer, the shorter tracks teem with bizarre, field-recorded spoken word passages, instances of electronic synth squiggles, and disembodied static noise that overtake the mix at random intervals. As a soundtrack to a short film, Love skirts closer to short, incidental cues that each inhabit a specific atmosphere. Spooky soundscapes of near nothingness percolate with distant music box melodies. Totally arrhythmic guitar bursts mesh with random-seeming electric organ leads.

Few Melvins albums have displayed this level of interest in electronic sounds and musique concrète since their often (unfairly) maligned 2001 epic Colossus of Destiny. But while that album upset expectations with its long form, punishing structure and lack of variation, Love leaps between diverse chunks without settling in any one place for too long. It's a challenging listen, as alienating and surprising within their catalog as Death is standard.

In an 2013 interview with River Cities Reader in 2013, Osbourne spoke on his eternal impulse to experiment and push the band forward:  "I've pushed a lot of musical boundaries. This is obvious. We don't have no brother bands in this regard and no one that I can point to that's forged this path for us. ... I make music and behave the way I would like other bands to behave."

King Buzzo has long since outlived the need for humility (or maybe he outlived that need a long time ago), as Melvins continue to lead by example both in terms of the music they produce and the work ethic that drives them to tour for half the year, almost every year. A Walk With Love and Death exemplifies the elements that keep fans coming back for more: the capacity to lose oneself in the thrill of their riffs and to headbang in the pit, juxtaposed against the need to take a step back, scratch your head, and follow along with their strange, nearly illogical decisions to confound and experiment.

AUDIO FILE: Listen to full 30 minute discussion between Managing Editor Jeff Ignatius and Melvins front-man Buzz Osbourne just before the Melvins July 2013 performance at RIBCO. Beyond marking 30 years of creative efforts, their latest album "Everyone Loves Sausages", a 50 state tour in 51 days in 2012 and Osbourne's formative influences, the two have a robust discussion on professional baseball, including why Buzz detests sports games with clocks.