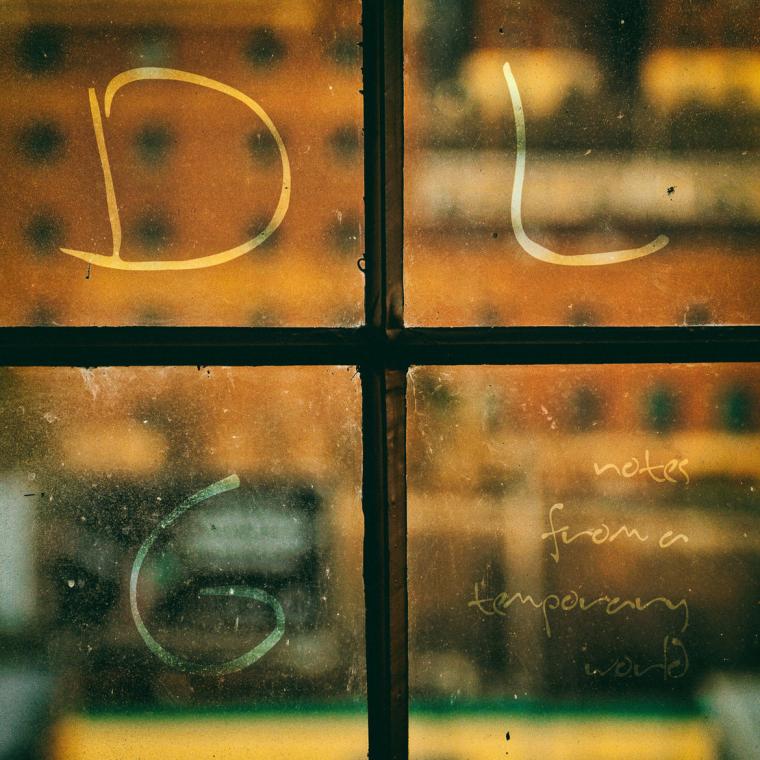 Rock Island-based composer Terry Skaggs, a.k.a. dead lizard grin, released an album of layered, atmospheric ambient/drone works in mid-April called Notes from a Temporary World. The artist describes the album as: “A collection of pieces arrived at during COVID-19 isolation, March & April 2020.”

Heavily recommended for fans of OG dark ambient projects such as Biosphere, Lustmord, and the more drone-focused output of Coil, Notes from a Temporary World reveals no signs of rushed composition or looseness within its tightly constructed, nearly hour long program – although it was composed entirely within the duration of the COVID-19 event. Skaggs has an excellent ear for atmospheric production and diverse, layered sound sources, and knows how to put together sessions that balance on the precipice between consonant ambient drift and more textural, free-form electronic wanderings.

Like any good ambient composer, the sounds that Skaggs layers into his tracks offers few clear clues in terms of what instrumentation created each tone and what processes he used to arrive at these feeds. The album’s notes mention “Synthesizers / Piano / Electric Piano / Programming / Samples” – but the line where each of these sources starts and end is uncertain. Synths, presumably both analog and software-based, form the initial layers of each track, and reach us in the form of formless wisps of drone that ebb and flow through generative patterns with no clear endpoints. Tones that mimic conventional instruments like vibraphones and organs thread their way into the sessions, presenting a contrast against the more synthetic elements of the electronic backdrops. Skaggs presents quasi-melodies that never quite latch into a quantized framework, hovering in a state of rubato stasis where rhythmic patterns are allowed to overlap and air out before fading back into the ether.

Notes from a Temporary World kicks off with a rock solid three-fer of near-shapeless ambient exercises entitled “You Come To Love The Darkness,” and “A Soundtrack for Isolation 1” and “2.” These tracks make the most out of the ambiguity of his sound sources and the juxtaposition of bass-heavy bursts against smeared upper register tones. “You Come to Love the Darkness” lurches over reverb-drenched percussion tones and the sound of what seems to be violin strings scraping against the bow.

The album reaches a more meditative midpoint with “That Was Yesterday,” the most overly consonant and melodic output within this collection. A lovely, contemplative piano performance forms the underlying current against a network of gorgeous interlaced drone voices. The juxtaposition of the extremely high fidelity drones against the lower fidelity piano elements forms the crux of this track, allowing listeners to dial into each layer of the work for a moment before shifting their attention to another. The central drone elements here shine with beauty, and Skaggs allots them the most space in the mix, letting them swell to the level of near overload without every straying into the realm of noise or abrasion. The track’s midpoint, around two minutes in, captures this balance perfectly, with an expertly mixed spread of drones that overwhelms the mix, proving especially transportive on a solid speaker system allowed to flow through a physical space.

“A Soundtrack for Isolation 3” contains some of the album’s most legible, rhythmic synth work. Constructed over slow, chimed arpeggios that interact with a glistening bass undercurrent, the track intensifies over its near-10-minute running time without dispelling its central atmosphere – that is, until around seven minutes in, with the introduction of a shimmering lead synth drone that comes to subsume whatever lies behind it.

Skaggs displays a keen but understated sense of narrative motion in his work, never falling into the realm of plug-and-play, loop-based composition that so many ambient artists tend to enter into. While his tracks often present, within the first couple moments, a good preview of the palette that he comes to explore, the pleasure here stems from witnessing how those elements slowly fuse together across time.

Regarding the epic 24-minute closer, “If Only This Could Last Forever,” Skaggs explains that the track is “built around a short, heavily processed sample loop excised from a recording of a live recording of a track by [unnamed multi-instrumentalist and producer from Mosfellsbær, Iceland] sourced from YouTube. I let this loop run for several hours until it had burned into my psyche, overdubbing ideas as it went along.”

There is no doubt that the artist in question here is acclaimed composer and ambient mainstay Ólafur Arnalds, whose influence extends across this entire album. Like Arnalds, Skaggs knows how to make clouds of tone linger in a somnambulant state that engages your attention without ever disrupting a sense of flow and forward motion. Though this track is essentially built around a sample of another composer’s work, it’s clear that the sample itself is only a tiny fragment of the tones presented here, offering more of a jumping point for the most expressive and diverse set of tones present on Notes from a Temporary World. It’s a lovely treat to hear Skaggs extend his practice for a lengthy 25-ish-minute duration, and allow his tones to stretch even longer over the course of the marathon ambient piece. The use of an outside source as the jumping point for a "remix" session calls to mind the work of Leyland Kirby, also known as The Caretaker, who essentially cornered the market over the last decade or so with his reworkings of external samples into his own transportive ambient work.

Though the aforementioned “dark” ambient pioneers such as Lustmord and Biosphere offer one entry point into Skaggs’s work, more contemporaries exist in the US ambient/experimental underground. His work brings to mind the heavenly drone compositions of LA-based artist Kyle Parker, known under the moniker Infinite Body (especially his modern classic album carve out the face of my god), and the prolific output of the Texas-based drone mastermind Derek Rogers – whose 2012 album Saturations proves to be an appropriate companion piece to Notes from a Temporary World.