Pit Lord, "Seasonings in the Abyss" 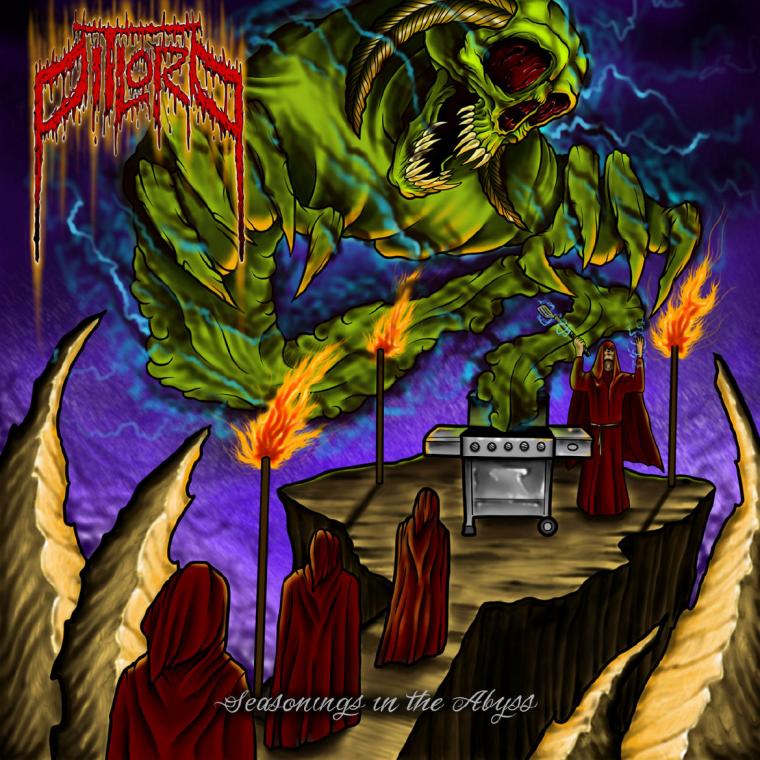 Pit Lord, "Seasonings in the Abyss"

Though the album’s title references the Slayer classic Seasons in the Abyss, the strains of metal found on the album typically veer closer to grindcore and old-school Florida death metal than anything you might find in the Big Four Thrash arsenal. The drum-machine-abetted death grind jams here channel Pig Destroyer and related projects such as Agoraphobic Nosebleed with their frequent use of irreverent samples as intros and interludes in their otherwise pummeling, quick-transitioning tracks typically aimed at your skull at a very high tempo. When some fragment of Tommy Boy, King of the Hill, or whatever else they have in their deep smoked-meat vault drops into the middle of a thundering grind breakdown, or the track devolves into a minute-long segment of the band members cracking up with laughter, we get a better sense of who these dudes are as narrative storytellers and general goofs – keeping it light, even accessible to some degree, while absolutely pummeling us with the sonics.

Guitarist/vocalist/drum programmer Dan Freitag and bassist/vocalist Lyndon Ehlers prove to be multi-talented instrumentalists and songwriters, as each of Seasonings in the Abyss’ 11 tracks bring a different flavor of cross-genre metal arrangement and dynamic riff configurations to the fold. “Spiritual Black Digestions” – nodding to Norwegian black metal band Dimmu Borgir’s classic 1999 album Spiritual Black Dimensions is as easy highlight by straying from the grind palette into the realm of lightning-fast tremolo picked guitars and blastbeat drum programming à la black metal – even frosted in Dimmu Borgir fashion with a sheen of epic keyboard harmonies. “Goatsmoker” doesn’t aim for the stoner-sludge tempo of Sleep’s Dopesmoker, instead rocketing into one of the most hypnotizing, head-banging passages of up-tempo grind around the two-minute mark, with an unrelenting snare pounding on every beat and a cyclical three-note guitar and bass chug steamrolling through the middle of the track.

As vocalists, both Freitag and Ehlers have come to nail a whole menu of different styles, from low-octave Cookie Monster growls that frequently pops up in technical death metal (see: Cryptopsy’s Lord Worm, Will from Artificial Brain) to the more vocal-cord-frying shriek style typically found in black metal, to the brand of hardcore barking that tends to have spit flying all over the front rows at the gig. Credit goes to them for keeping their ridiculous lyrics relatively articulate despite the generally disfiguring and heavy-as-hell approach to vocals. It’s clear that the band expects you to take their more edgelord-y lyrical topics (such as the vegan-related samples and lyrics of “Deveganize”) with a heavy block of salt – clearly they’re trying to figure out the most faux-brutal, gory topics to send up, in the spirit of, say, that one Seth Putnam project whose name cannot be repeated here.

The band’s approach to guitar production and the intensity of the drum machine in the mix results in some absolutely punishing, high-definition tones – a little tilted towards the upper register of the mix, due to the clarity and specific tones of the drums, but never lacking in the bass factor needed to maximize the power of the chunky, churning riffs. When the band decides to throw a sudden left turn into their already complex tracks even more, as with the massive guitar solo that breaks open toward the end of “Deveganize,” their deft integration of other sound sources, tonal guitar palettes, and drum styles shines with attention to detail.