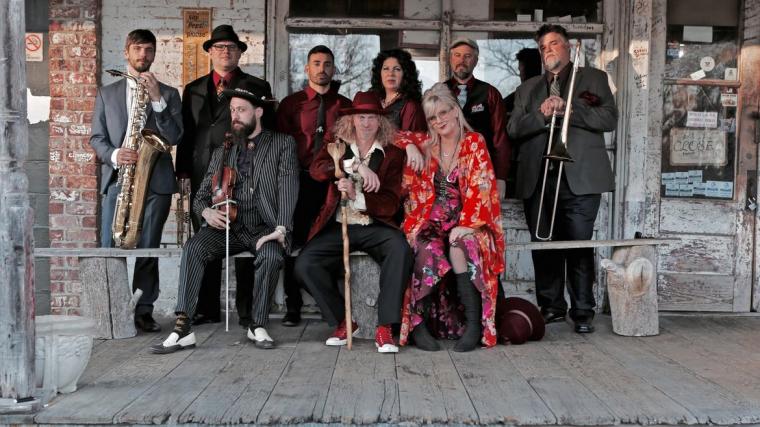 A beloved jazz, swing, and Americana ensemble whose latest album Beasts of Burgundy inspired PopMatters to rave “There's no doubt that the band's musical chops have only improved over its lifetime,” Squirrel Nut Zippers takes the stage at Davenport's Redstone Room on January 29, with Americana Highways adding that the group's most recent recording “displays a uniquely American gumbo of influence in its amalgamation of New Orleans style.”

Formed in 1993 in Chapel Hill, North Carolina, Squirrel Nut Zippers' original lineup was composed of founder James “Jimbo” Mathus (who still performs with the band) and his then-wife Katharine Whalen, Tom Maxwell, Chris Phillips, Don Raleigh, and Ken Mosher. Influenced by such legends as Cab Calloway, Django Reinhardt, Fats Waller, and Tom Waits, the group is credited for contributing to the swing-music revival that occurred during the 1990s, with the musicians' breakthrough single "Hell", in its calypso rhythm, closely aligning the band with the neo-swing movement. Squirrel Nut Zippers' debut album, 1995's The Inevitable, received airplay on National Public Radio and sophomore recording Hot was certified platinum in 1996, its release marked by being one of the first-ever enhanced CDs, containing an interactive presentation created by filmmaker Clay Walker. In support of the album, the band toured with rock icon Neil Young, and went on to perform at the 1996 Summer Olympics in Atlanta and at President Bill Clinton's second inaugural ball.

With the albums Perennial Favorites, Christmas Caravan, and Bedlam Ballroom all released before the band went on hiatus in the early 2000s, Squirrel Nut Zippers' musicians made notable appearances on Garrison Keillor's radio show Prairie Home Companion and on TV in The Tonight Show with Jay Leno, Late Show with David Letterman, and Dick Clark's New Year's Rockin' Eve. Their songs were also popular fixtures in both television and movies, included in everything from the series Sex & the City and The Drew Carey Show to the films A Life Less Ordinary and Burlesque. Following renewed interest in Squirrel Nut Zippers at the approach of the 20th anniversary of Hot, Mathus began assembling a revival band, focusing on musicians in the New Orleans area. They began touring in June of 2016, and since the release of 2018's Beasts of Burgundy, have continued to travel the country with Mathus accompanied by bandmates Dr. Sick, Cella Blue, Leslie P. Martin, Eddie King, Dave Boswell, Henry Westmoreland, Tamara Nicolai, and Neilson Bernard III.

Squirrel Nut Zippers plays the Redstone Room on January 29 with an opening set by Gentlemen's Anti-Temperance League, admission to the 7:30 p.m. concert is $35-40, and more information and tickets are available by calling (563)326-1333 or visiting RiverMusicExperience.org.