The Stories Behind “Sunshine Superman” ... and More: Donovan, June 10 at the Adler Theatre 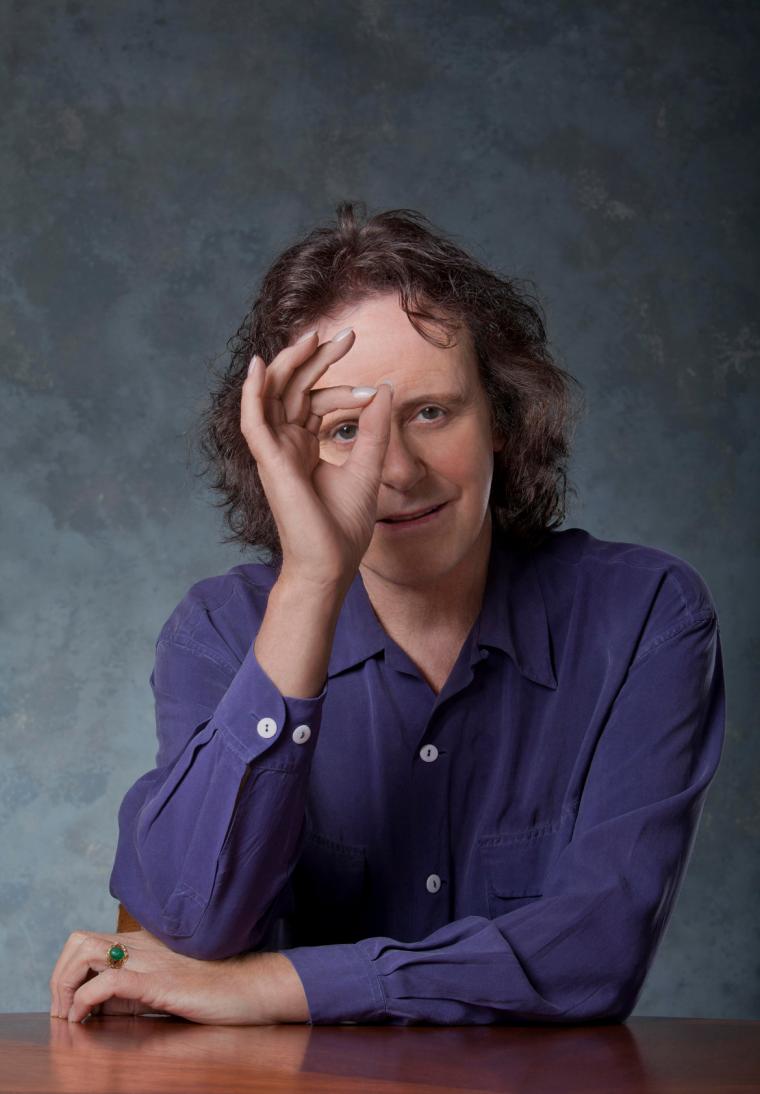 Donovan helped initiate the ’60s psychedelic revolution with his number-one hit “Sunshine Superman.” To commemorate its 50th anniversary, the Scottish singer, songwriter, and guitarist is touring America – including a June 10 stop at the Adler Theatre.

The backing musicians on the single (and the album that shares its name) included Jimmy Page and John Paul Jones shortly before they formed Led Zeppelin. Donovan discussed these matters as well as his friendship and interactions with the Beatles in a recent e-mail interview (which has been edited for length and clarity).

You were still in your teens when you recorded “Sunshine Superman.” What was Swinging London like for a young man from Scotland?

It was much more amazing than photographs or videos can show.

Imagine only one cool record shop, Dobell’s in London, where we would go to buy vinyl of jazz, blues, folk, blue beat, Indian, and poetry. Many of the emerging muses and bands could be seen browsing the stacks for the rare and the important music.

And in the wee back streets of the city, the three social classes blended: working class, middle class, and upper class.

The art schools were pouring out the talent that would form the look and the philosophy, and, most importantly, introduce the Bohemian Manifesto – which would change everything.

In the folk clubs, the tradition was being reinterpreted. In the jazz clubs, R&B bands were being booked, led by Brian Jones who invented the Rolling Stones.

The scene was smaller then, and one could run into the new happening at the few crossroads of clubs, pubs, studios, and beat cafés, and around certain musos’ flats like Bert Jansch’s and actually hear the latest songs being composed.

In recording studios, a new breed of engineer/producer was creating the future of music on four-track recording machines, on analog reel-to-reel tape.

And more important than any of it, the folk invasion of the music charts brought poetry back to popular culture.

What inspired you to write “Sunshine Superman”? It is distinctly different from your previous album.

The poet of a lone stringed instrument and vocal, the ancient Gaelic root from which I spring, was how I began recording in mid-1965.

This song is also a love song for Linda. We were parted yet still loved each other; we both now feel our parting then saved our love, as no couples in the inner music world survived the super fame.

The mention of “Superman” in the title is from the book by Nietzsche, Thus Spake Zarathustra, where the author speaks of a future Superman and Superwoman – not physical, but super-powered by expanded awareness and illumination. The evolution of consciousness that will enliven our fourth level, hopefully in time.

The backing musicians on “Sunshine Superman” included future members of Led Zeppelin: Jimmy Page and John Paul Jones. What memories of them do you have?

Jimmy Page was doing sessions between the Yardbirds and Zep, and he strolled into the session and completed the fusion I needed of jazz, blues, Latin, [and] classical harpsichord so expertly arranged by John Cameron. ... John Paul Jones did play electric bass, and Spike Healy played double bass on the track. Two basses.

“Sunshine Superman” went to the top of the America charts. How did you learn about that?

The album was completed in May 1966, and – due to Alan Klein moving me from Pye Records to Epic/Columbia ... – Pye sued and the album was in the courts. Gyp [Mills] and I thought: “That’s it. We will just go back on the road.” We went to the then-lonely island of Paros in Greece.

On Paros, Gyp and I rented a wee shepherd’s hut that included a one-eyed donkey named Serafina. We lived on tomatoes, feta cheese, bread, fresh fish, and wine, by lamplight and candles, and we saw only the rare German or Dutch tourist.

We took with us a new battery-operated briefcase record player with a cassette player inside, plus the white-label acetate of the Sunshine Superman album, Revolver, and Leonard Cohen’s first album.

One day, in the village’s only taverna – where we ate for pennies – the owner Costas said we had a phone call coming in two days on the only public phone in town. When the call came through, it was my UK manager, Ashley.

He said, “Get to Athens as soon as you can. There are two first-class plane tickets to London waiting for you. ‘Sunshine Superman’ is number one in the States and in the top five all over the world.”

I hung up, and Costas asked what the call was about. We told him and emptied our pockets on the table for the steamer fare to the mainland. We didn’t have enough. Costas laughed. “Your song is number one, but you boys are broke.” He said he’d pay for our steamer fares in exchange for the briefcase record player.

From London I flew to New York and on to LA. The first time I heard the single on the radio was on KRLA in a rented Ford Mustang.

Along with the Beatles, you traveled to India to meet with Maharishi Mahesh Yogi in 1968. Could you tell us about this experience?

My early friendship with the four scousers:

Sharing the same books of spirit. George and I introducing sitar on our records. Our search for a guru, and finding one. Our initiation by Maharishi in ’67 and the trip to India in ’68, with the world’s media following us en masse. My role in the jungle as midwife to the birth of the most interesting White Album songs as I taught John my guitar-picking styles, and the left-handed Paul – he learning by ear – and my gifting the three songwriters my unusual chord structures, which created, as you know, “Dear Prudence,” “Julia,” “Blackbird,” “While My Guitar Gently Weeps,” and others.

And after much controversy, our return to the West with Transcendental Meditation to really give inner peace to the world. I, at first, being the only one of we five to seriously promote TM on my tours in ’68. John in trauma over leaving Cynthia and loving Yoko. He making gibes in a song about our guru, then apologizing to Maharishi.

And later my own Linda, David Lynch, and I attracting Paul and Ringo back into TM to create the Radio City Music Hall concert “Change Begins Within” [in 2009].

The 50th-anniversary U.S. tour is dedicated to the continuing promotion of TM into schools. Two concerts raised a large sum for the new Donovan Children’s Fund within the David Lynch Foundation, to bring TM to children at risk in America.

The Beatles and I were on the same path from the start. Our songs sing it, and our influence on the world has established the words “love” and “peace” and “meditation” more than any other songwriters in this age.

The Beatles’ and my work represents a positive and creative gift to our broken, disjointed, nuclear, insane modern world.

And as our lyrics clearly sing, our heartfelt wish is always to help save humankind from the blind and suicidal madness before it’s too late.

You share lead vocals with Alice Cooper on 1973’s “Billion Dollar Babies.” How did that come about?

My favorite studio in London was Morgan Studios. Upstairs I was recording Cosmic Wheels with Mickie Most and downstairs was Alice recording.

He came up to hear what I was doing. I visited his session, where a lanky guitarist was playing a bit like Keith Richards. The song was “Billion Dollar Babies.”

Alice asked: Would I try a vocal?

I said: I will sing falsetto to climb above the mid range of the power guitars. I learned this from Chris Squire of Yes, who said falsetto singers are best in power bands, like Jon Anderson and Robert Plant – no other way to be heard.

So onto the mic and I cut loose my high vocal. It became number one.

Alice says often how he showed me how to rock, but I was doing that already.

You have worked with great producers – from Mickie Most to Rick Rubin. Any thoughts on them?

Rick is like Mickie: He is simple and clear in his recordings, knowing the session must have good songs and pure sounds and classic mics in the right atmosphere.

How did you feel about your induction into the Rock & Roll Hall of Fame in 2012?

A great honor. Awards highlight the artist’s contribution, and bring younger fans to the work. This is important, as I write songs on subjects new songwriters do not cover.

Do you still enjoy touring?

These last nine concerts are to reach fans who complained I did not visit their town. These may be the last concerts for a long while.

I love the open space live music creates inside the audience, and I play them as an invisible instrument, awakening the fourth level of consciousness, even though only for a brief moment. Someone in the dark can experience the immensity of the unified field. Only music, of all the arts, can at special times gift this service.

Bruce Walters is a professor of art at Western Illinois University. He can be reached at BD-Walters@wiu.edu.