Stripping Away the Superfluous: Dylan LeBlanc, July 1 at Daytrotter 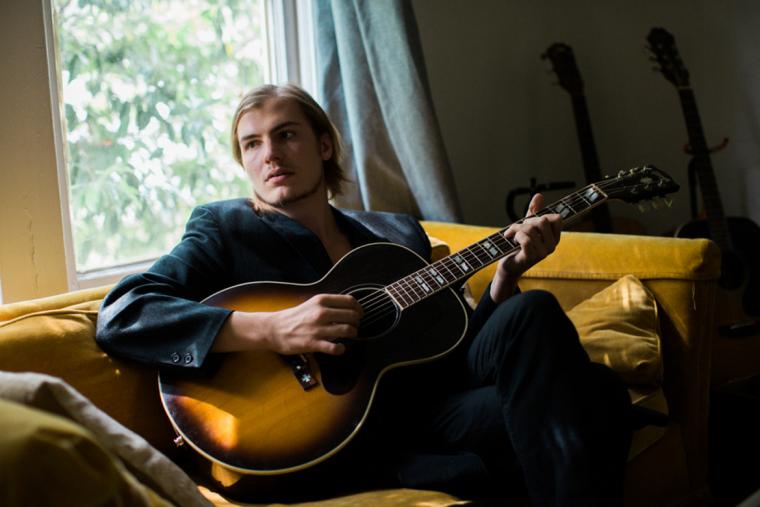 When he began working on his latest album, singer/songwriter Dylan LeBlanc became interested in how people act a certain way.

“Television selling this and that. Pretty women say I wanna look like that, more than willing to pay all of that money, but he won’t stay,” LeBlanc sings on “Look How Far We’ve Come.”

This track from Cautionary Tale looks at how people have been convinced that changing behavior will yield the results they want – for example, that a different appearance will keep a man around. As a whole, the album ponders societal norms and the way the world is.

This questioning of habits and norms could sprout from LeBlanc’s personal experience. Before writing this album, his Web site notes, LeBlanc had “slipped into a blur of booze and self-doubt.”

On “Man Like Me,” he tells a story of acting the way a materialistic and hedonistic society would expect but realizing the consequences: “I made a lot of money, and bought a lot of things, and I held a lot of women that tried to marry me. But the pardon never came before the plea.”

LeBlanc will play at Daytrotter in Davenport on Friday, July 1, as a part of a headlining tour supporting Cautionary Tale. Since its January release, he has spent much of the year on the road, opening for bands such as Alabama Shakes and appearing at festivals such as Bonnaroo.

To record the album, LeBlanc returned to Muscle Shoals, Alabama, where he lived with his father – a musician – for four years during his childhood. John Paul White (formerly of the Civil Wars) and Ben Tanner (a current member of Alabama Shakes) were also heavily involved in the creation of this album, both producing and playing on it.

“Anytime you cut there, you’re gonna get a piece of that sound,” LeBlanc said. “I mean, when they say the Muscle Shoals sound, there really is something to that. And we all kind of grew up listening collectively to that soul music, that kind of late ’60s, early ’70s sort of vibe, you know?”

Although LeBlanc didn’t record at the legendary Muscle Shoals Sound or FAME studio, the city’s influence is still evident.

“I think that got sort of ingrained in ... me and John Paul White, me and Ben Tanner, all the other great musicians that come from there,” LeBlanc said. “So that was a big part of our sound.”

The clean acoustic-guitar tone and sparse instrumentation could have been pulled off a record from a 1970s folk artist that recorded at Muscle Shoals, such as Cat Stevens. Simplicity dominates many tracks on the album. “Lightning & Thunder,” a ballad with a calmness contradictory to its title, has LeBlanc singing over little more than finger-picked guitar and strings.

“I’m Moving on” especially recalls the ’60s, starting with the same kick- and snare-drum pattern as the Ronettes’ “Be My Baby.” The whole track, with its melody and instrumentation, has a ’60s pop feel.

Beyond the impact of Muscle Shoals on the album, a little advice from White drove LeBlanc in a direction he had never gone.

The attention to the message goes hand-in-hand with the parallels this album has with 1970s folk. The lyrics come through more clearly than those of his previous albums, Paupers Field and Cast the Same Old Shadow.

“Everything has thought put into it,” LeBlanc said. “We didn’t put anything on there that we didn’t absolutely need.”

Dylan LeBlanc will perform on Friday, July 1, at Daytrotter (324 Brady Street, Davenport; Daytrotter.com). The 8 p.m. show also features The Pollies and Matthew McNeal, and tickets are $8 in advance and $12 at the door.