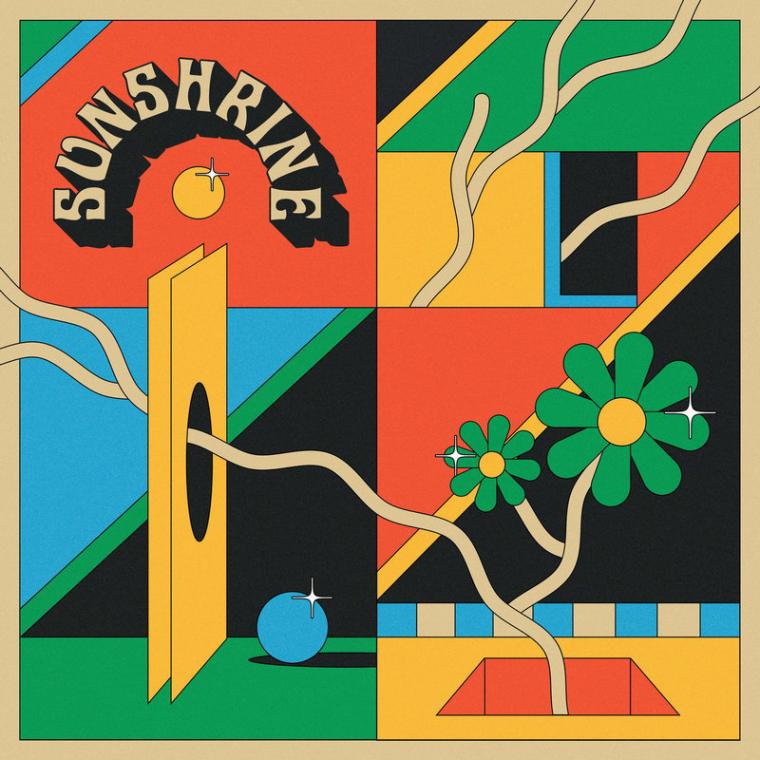 Moline-based indie rock crew Sunshrine whip up a heady cocktail of garage-rock tunes, psychedelic-rock excursions, and amorphous collage pieces, all frosted with a sheen of immaculate, Beatles-esque pop production for their self-titled LP Sunshrine. The album’s lovely throwback artwork accurately captures the vibe of the band’s music with its simplified day-glo color palette that renders tripped-out psych tropes including monoliths, orbs, and celestial flowers as building blocks for a heady four-panel tableau. While the music of Sunshrine hovers between pure '60s Nuggets worship and a more modern songwriting sensibility, the band’s high-definition approach to production makes sure that every phased guitar lick, chubby bass line, and rollicking drum pattern reaches us at a level of crisp detail.

From a production standpoint alone, Sunshrine deserve every plaudit you could throw at them from within the wide spectrum of indie rock – perhaps centralized with a post-Tame Impala focus on tonal fidelity and textural accents within the realm of what could be considered traditional rock tracks. Album centerpiece “Lovers In Season” slides from an intro segment oriented around a bubbling stew of processed vocals and reverbed-out guitar licks into a driving groove that allows the string instruments to expand and drift into more freely improvised modes. The bass playing in particular keeps the track on course for its 10-minute running time, providing a tonal benchmark that remains unchanged as the two guitars swirl and activate in the edges of the mix. Check out what happens around the track’s six-minute mark, when the bass starts to occupy more room in the mix than before, and the amp distortion comes into clearer focus, providing the chance for the bass to occupy the role of a lead voice.

By the track’s halfway point, when the guitars kick on the distortion and the drums switch to a more bludgeoning, Bonham-esque stomp, it’s hard to even remember the atmosphere in which the track began – a sign of an effective narrative arc deployed across a variety of moods and levels of intensity. The fact that the band maintains an intrinsic and defined character even as their tones morph into different configurations speaks to their effectiveness as psych rock jammers, and their honed sense of how to keep a longer track moving at an interesting clip. By the eight-minute mark, the tempo picks up as the drums slam on the cymbals and the guitars whip up into a nice Deep Purple-core “Highway Star” burner.

The track “Puzzle” is the one that kicks on when you open Sunshrine on Bandcamp, and it might serve as the most concise “single” within the scope of the album. The track coasts over a spread of whining organ licks and big vocal hooks, effectively planting Sunshrine closest to their '60s influences in one compact, four-minute burst. The band knows how to pack a “pop” song to the brim with details, from the bright guitar solo that takes over toward the end of the track, and the pleasant scrapes of the pick against the strings throughout the quieter portions of the song. When the organ kicks into a more sizzling vibe for the interlude toward the end of the track, the energy is perfectly primed for a stoned and sublime afternoon spent lying in the park.

[Side note: (and this isn’t directed at Sunshrine in particular but to the general array of bands that release music on Bandcamp) what’s the deal with albums on Bandcamp that start at a track other than the first track? I understand that people’s attention spans are shorter than ever right now when it comes to streaming music, but when I open up an album and it starts at track five, it makes me think that the tracks before that aren’t worth listening to.]

“Swamp Rat” serves as Sunshrine’s other extended jammer, but it shifts the dial closer to – who would have guessed? – murky swamp rock, with guitars all dressed in disfiguring effects. Once again, the bass and drums hold the track down and prevent it from falling too far into the formless rabbit hole. Here, the guitar players get a chance to really burn, as the left-channel guitar fires off hallucinogenic bursts and the right-channel guitar doles out a more chordal framework heavily fried by phaser effects.

Sunshrine finishes off with a trio of shorter, more pop-adjacent tracks that once again show off the band’s flair for meaty pop hooks and fast-shifting chord progressions. “Waiting So Long” generates tension from its more woozy tonality, but keeps the energy up with sprightly hand claps. “Who’s the Mechanic” bumps along upon a more standard rock template at first, until the churning hook kicks in with its knotty chords that keep us on our feet, trying to anticipate the band’s next move.

“Spring Is Coming” caps Sunshrine off with a whiff of fresh air, built on gentle field recordings of rainfall and a more pastoral guitar arrangement. The song serves as a through-line to the progressive folk practiced by, say, Fairpoint Convention and their modern children such as Fleet Foxes. In total, the band’s range and attention to songwriting detail shines just as brightly as their high standard of production.