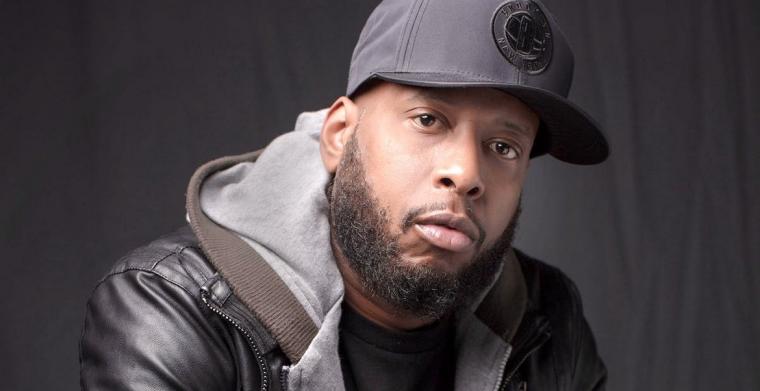 The legendary Brooklyn-based MC and Black Star member Talib Kweli drops into East Moline venue the Rust Belt for a show on February 14.

Kweli set a high benchmark for socially conscious, tongue-twisting rapping as early as 1998 in his role as one half of the groundbreaking duo Black Star with Yasiin Bey (formerly known as Mos Def). Classics such as “Thieves in the Night” adapted the fluid, jazzy production of forebears including A Tribe Called Quest into a backdrop over which Kweli and Bey spat their mind-expanding, interwoven verses. While Bey leaned into dense bars loaded with internal rhymes and malleable flows, Kweli approached the mic with more of a battle-ready, confrontational style that found him cramming syllables into small pockets in a dizzying, almost off-kilter fashion. You get the sense that Kweli was a writer foremost, and his ideas came out on paper as fully-formed poems that he then adapted into bars full of sudden about-faces and metrical aberrations. His was a knotty, literary strain of issue-engaged rapping that constantly turned back to the struggle of being a black man striving within an oppressive society. He tossed off pointed observations and critiques while never forgetting to sink deep into the beat’s bedrock.

Nowhere was the duo’s chemistry more evident than the mighty “Definition,” which transmuted hooks from Boogie Down Productions’ “Stop the Violence” into a new form that maintained the same message, all the more relevant in the light of the recent murders of Biggie and Tupac: It’s dangerous to be an MC. While Bey’s cadences stayed tethered closely to the percussion and tumbled out of him with a rapid-fire groove, Kweli always seemed to be pushing against the beat to get his words out in a way that was purposefully disruptive and overloaded. His rhyme schemes treated longer words as playthings to collide together, with bars such as “You must know karate or think your soul is bulletproof like Sade / Stop actin' like a bitch already, be a visionary / And maybe you can see your name in the column of obituary.” Even on the page these lines feel packed, but Kweli’s relentless spitting deftly shoehorned them into digestible couplets.

If Black Star kicked off Talib Kweli’s career with a huge bang, the eight solo albums that followed demonstrated that his drive and consistently far-reaching skills on the mic knew no bounds. His most recent full-length, 2017’s Radio Silence, finds him digging even deeper into his jazz roots, while offering up a platter of striking collaborations that stretches his tracks into new directions. “Write at Home” floats over gorgeous jazz piano from Robert Glasper and comes front-loaded with a winding, free-from verse from Datcha, making it feel more like a miniature manifesto than a conventional hip-hop tune. The MCs pour out metaphysical commentary that doesn’t necessarily hinge on rhymes or traditional cadences to get their ideas across. Kweli’s rapping here edges closer to the rhythm and demonstrates his thorough knowledge of how the pure sounds of each syllable can serve different roles within the context of one verse. His voice dips and rises with his vowels as he allows certain syllables to stretch into slant rhymes. When he tells us he’s “rolling a blunt on a copy of Native Son,” referring to Richard Wright’s beyond-classic 1939 novel that portrays the systemic horrors of racism and class struggle in the mid 20th century (all of which, obviously, hold credence in today’s landscape), the imagery is thematically perfect. Kweli ties his ideas into a legacy of championing the marginalized, and striving to overcome what seems like an insurmountable adversity from so many facets of society.

The lead singles on Radio Silence shoot off at unexpected angles with the input of Kweli’s chosen collaborators. The excellent title track kicks off with a pensive, introspective string arrangement that swirls through clouds of dissonance and pizzicato string flourishes. When the beat finally hits, the track shifts into a totally new mood, as Kweli starts going in at a double-time clip over a quivering synth line and syncopated percussion patterns. This is one of his most thrilling verses in recent memory, as he rockets through tongue-twisting flows before letting the beat breathe behind him in against more elongated bar structures. The hook comes from Dirty Projectors member Amber Coffman, who more than proved her mettle in the context of hip-hop- and R&B-adjacent production with that group’s tracks, among them the Timbaland-influenced “Stillness is the Move.” Here, Coffman hits the mix with a floaty yet confident delivery that contrasts Kweli’s relentless, tightly stacked lyrics.

Then we have “Heads Up Eyes Open,” which finds Kweli back in a piano-and-trumpet-led production that explodes into a gospel-tinged chorus from Yummy Bingham that feels closer to chipmunk-soul era Kanye. When Rick Ross shows up for a verse, he paces his way through elastic, booming flows, proclaiming, “Nefertiti would hold me when I was cold.” Leave it to Kweli to plant a full trumpet solo in the mix along with his verse, to remind us how closely the shifting rhythms and improvised frameworks of his bars, and all of hip-hop, are tied to the history of jazz.

Talib Kweli plays the Rust Belt on February 14 with sets by Sweet Diezel Jenkings and VS Vast Change, admission to the 8 p.m. concert is $20-25, and more information and tickets are available by visiting TheRustBeltQC.com.