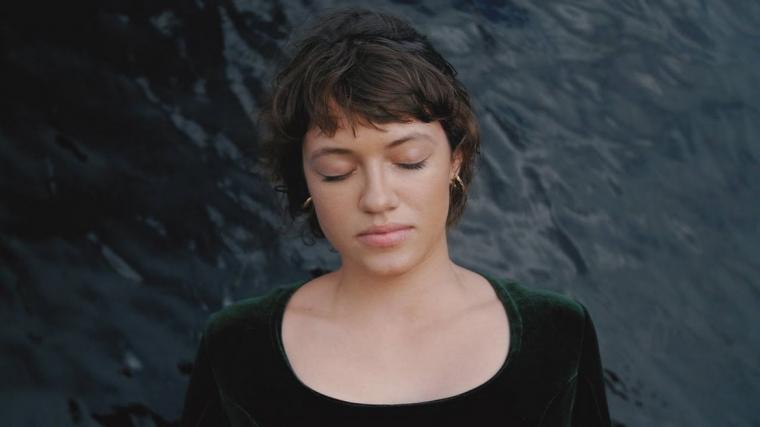 Loosely following in the wake of a generation of electronic and drone-flecked ambient vocal projects such as Grouper, Julianna Barwick, and more recently Kaitlyn Aurelia-Smith, Minneapolis’s Sarah Elstran makes music under the name The Nunnery that bridges the gap between bright-eyed pop composition and hands-on-gear live layering of voice. Her 2017 full-length Fire Dove tethers her songwriting template pretty closely to the realm of whispered vocal missives and spectral effects processing. Tracks such as album opener “Begin” build over a looped bedrock of her beautiful wordless vocalizations and trails of reverb, before she introduces more legible lead lines into the mix. As the trope of the one-woman-band becomes more deeply set into the musical landscape, The Nunnery sets herself apart by way of her hyper-expressive delivery and her ear for distinctive melody. Her tracks never feel like they carry any dead weight, as their narratives spread out in sinuous forms that don’t choose to foreground one layer of her production. Her vocal chops give us the kind of detail and wide, multi-octave range that we might come to expect from a marquee pop star, while her production decisions continually keep us guessing as to what rabbit holes her tracks might fall into next.

Her newest album We Are the Stars, released in the middle of 2019, takes a step forward in her catalog by introducing a heavy focus on percussive beats and chopped, almost glitched vocal textures. Opting for a production style that seems more closely allied to Björk’s beautiful and underrated album Medúlla than to any more conventional pop offering, the album’s tracks utilize staccato vocal formants and bursts of onomatopoetic syllables as building blocks for rhythms. Instead of coming off as a cheesy exercise in beatboxing, the individual chopped elements that populate these tracks maintain a degree of high production value and rhythmic complexity. Highlight “Take a Walk” comes off like a baroque vocal round pumped through a modern digital audio interface, as a gorgeous, floaty lead weaves between electronic percussion and strategically deployed background vocals. Album opener and title track “We Are The Stars” blasts Elstran’s voice into digital fragments that lay out over a standing electronic drone and form a chord progression for her to sonically dance over. Elsewhere, on the holy album closer “Night Dream Cloud,” she lets her voice in all its billowing layers come to constitute the entire mix aside from a few bass notes and blipping synth figures. Here we get a front-row seat to the pyrotechnics her voice is capable of, as her melodies seem to rise out of nothingness and fall back just as quickly in elegant arcs of activity.

Opener Jared Bartman, a.k.a. Moon Ruin, has visited the Rozz-Tox stage before, and his strain of kinetic, vocal-heavy synth pop fits the bill perfectly with The Nunnery. Sounding something like Violator-era Depeche Mode, when the band's production values caught up with what we consider more modern synth tones, his tracks evolve into increasingly knotty narratives of squelchy bass, dreamy upper register arpeggios, and skittering percussion patterns. Like The Nunnery, you might question whether this music would stand on its own without the vocal element, but when it hits, any doubt as to how fully formed these tracks are instantly fade away. To top it off, Bartman isn’t afraid to add totally left-field elements to his productions, like the sizzling, electronically processed guitar lines and brass bursts on “Tarmac,” from his 2018 album Slow Down Ego.

Moline-based bedroom pop/rock project Pollinators rounds off the bill. The brainchild of singer/multi-instrumentalist Tom Teslik, Pollinators’ releases to date number the 2016 EP Self Address Envelope and a couple loosie singles since then. Most recent export ”Don’t Put Me Down” shows off Teslik’s ear for a good hook, and presents a kind of post-doo-wop, post-Weezer songwriting style dotted with quickly shifting chord progressions and escalating, distorted guitar lines. “Used to Without You,” from early 2019, trades in a little sliver of high production value for a nice, lo-fi grit, coming off like some slightly more melodic Guided By Voices B-side, or an outtake from The Bends-era Radiohead. The six-minute track shifts through hazy guitar solos and expanses of lead cello before sparking up into sizzled double-tracked guitar leads that call back to the bone-dry, seminal country-rock output of Crazy Horse.

The Nunnery plays Rozz-Tox on August 20 with opening sets by Moon Ruin and Pollinators, admission is a sliding scale of $5-10, and more information is available by calling (309)200-0978 or visiting RozzTox.com.