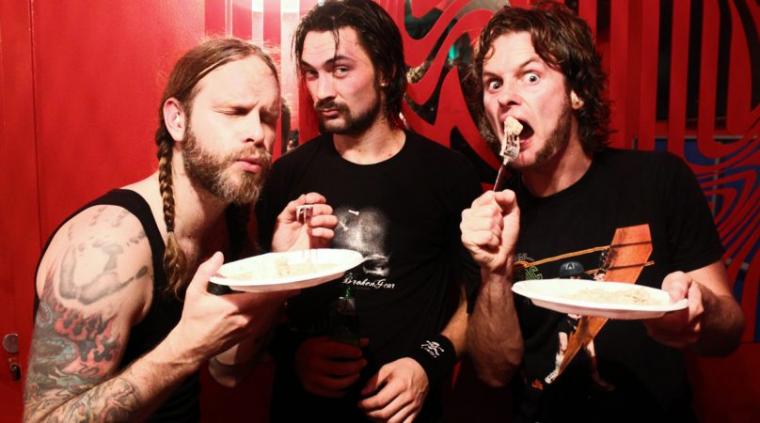 Longstanding Swedish stoner-rock shredders Truckfighters play RIBCO on February 22, offering up a rare chance to see their fuzz-drenched live set in the context of a relatively intimate venue.

The three Swedish dudes that make up Truckfighters certainly know how to mythologize themselves. Any communiques issued from the band since their formation in 2001 center heavily on the concept of “fuzz,” or, literally, the distorted texture of the band’s playing when pumped through effects pedals and giant amplifiers. They declare themselves gods of fuzz, release music on a label called Fuzzorama, and appeared on a Swedish MTV show called, yes, Fuzz. Fuzz is big with these guys. In concert, guitarist Niklas Källgren, also known as Dango, takes after fellow fuzz luminary (or arguably progenitor, to some degree) Matt Pike of Sleep by very rarely wearing a shirt. Bassist/vocalist Oskar Cedermalm, also known as Ozo, typically rocks huge mutton chops framed under his Cocker-Spaniel-style red locks. These two have been the core of the band since the beginning, while a huge roster of drummers and occasional second guitarists have come and gone over the years – all of whom have used one-word monikers such as Enzo, Poncho, Mckenzo, or Frongo. These nicknames more or less become some kind of superhero title in the band’s fuzz lore, allowing fans to be like “remember back when Frongo was playing drums? Best era, man.” Lest you think that the band’s tour this year will be any less fuzzy, a press release assures us that, “the shows will be better than ever and as always with a hell of a fuzzy sound!” Phew-w-w-w.

But does the music really live up to the sheer level of fuzz that the band offers us in word? I’ve never seen them live, but I can say with confidence that their music is supremely fuzzed out. The bass is so distorted and takes up so much space in the mix that it competes or even overpowers the guitar, and the guitar is so down-tuned and low-end-focused that it at times skirts closer to doubling the impact of the bass. Part of the idea of “fuzz” is low-w-w-w-w frequencies, of course. The combination of the guttural bass frequencies, the natural feedback and drive from the amp, and any extra textural modification from the effects creates that kick-you-in-the-stomach level of heaviness required of any stoner rock band worth its salt. Truckfighters have this in spades. At some point, it becomes less about whether the guitar is leading and the bass follows, or vice versa, and more about how effectively they work in tandem to both maximize the volume and heaviness of their output, and cover a wide spread of harmonies and diverse riffs between them.

Truckfighters aim for the brand of galloping stoner-metal jams originally mastered by Melvins in the late '80s, and crystallized by Kyuss in the early '90s. While Melvins basically invent genres upon genres with their early output, including everything from drone metal [see: Boris and Sunn O))) after them], stoner doom metal (see: Sleep and its offshoots), and good ol' grunge rock (see: devoted Melvins worshipers Nirvana), contemporaries such as Kyuss were sketching out the tenets of what would be come a more “desert”-focused strain of stoner metal. Their music, and the music of bands their members would form later such as Queens of the Stone Age, was charged with the energy of a vast empty landscape of sand, and their shows often took place out in the desert at parties powered by generators. It’s into this lineage that the music of Truckfighters falls, to the point that the band’s Web site takes a moment to highlight the fact that Josh Homme (guitarist of Kyuss and head honcho of Queens of the Stone Age) once called them “the best band that’s ever existed.” In the realm of stoner metal, this is like a personal benediction from the pope. In a sense, Truckfighters have big shoes to fill with this kind of endorsement, and for the most part their music doesn’t disappoint.

Their first album Gravity X, released in 2005, clocks in at 67 minutes and isn’t afraid to let tracks such as the epic opener “Desert Cruiser” brood over long passages of tight riffing and engine-revving double-time shred. Truckfighters set themselves apart from the pack of stoner metal with a few aces up their sleeve. For one thing, they know how to write real hooks, both in the vocal parts themselves and in the fast-paced song structures that cram riff after riff together in close succession. Their music has plenty of sudden shifts in mood and rhythm that become fist-pumping little climaxes within each track – moments where you turn to your friend at the show and go “Wha-a-a-at-t-t?!?” while miming air guitar. With lead guitar lines that often capitalize on close harmonies and synchronized solos, their six string arrangements split the difference between Kyuss and, say, Thin Lizzy. The latter definitely comes out when the band chooses to dial down the distortion to emphasize lightly sizzling lead lines that skirt closer to a bluesy, classic rock vibe.

Truckfighters’ most recent album is simply titled V, most likely because it’s their fifth album, but also in the “V is for Victory” sense hammered in by the giant peace-sign statue on the album’s cover. Released via longtime metal behemoth Century Media, the album boasts some of the clearest, most professional production in the band’s career, with particular attention paid to the vocals. The vocals in Truckfighters have always seemed like the least important element to some degree: the frosting on top of a sea of riffs that more or less reminds you that you’re listening to a “real song,” and not just a disembodied shred fest. On V, the vocal presentation and melodies themselves seem to have leveled up a bit, as bassist/vocalist Ozo takes more risks with his range and rises up into more dynamic, scale-spanning melodies. The melodic decisions of the vocals bring the music of Mastodon to mind, specifically the moments in which that band’s bassist/vocalist, Troy Sanders, sings in his screeching upper register while still maintaining some sense of grandeur, like a really stoned wizard casting spells into the microphone. When I say that V has “clearer” production than previous albums, this doesn’t mean that the level of fuzz has fallen. Rather, given wider mixes than usual that offer more room for the fuzz to flow into, the guitar and bass riffs have more space to spread out and get a little more separation and clarity as a result. If the band benefited from those two instruments locking into a state of close symbiosis before, now they benefit from letting us hear each stream as its own independent line, filled with its own deviations and details.

Truckfighters, who will be playing Gravity X in its entirety, plays its Rock Island concert on February 22 at 9 p.m. with an opening set by Ohio's Valley of the Sun, and more information is available by calling (309)793-1999 or visiting RIBCO.com.