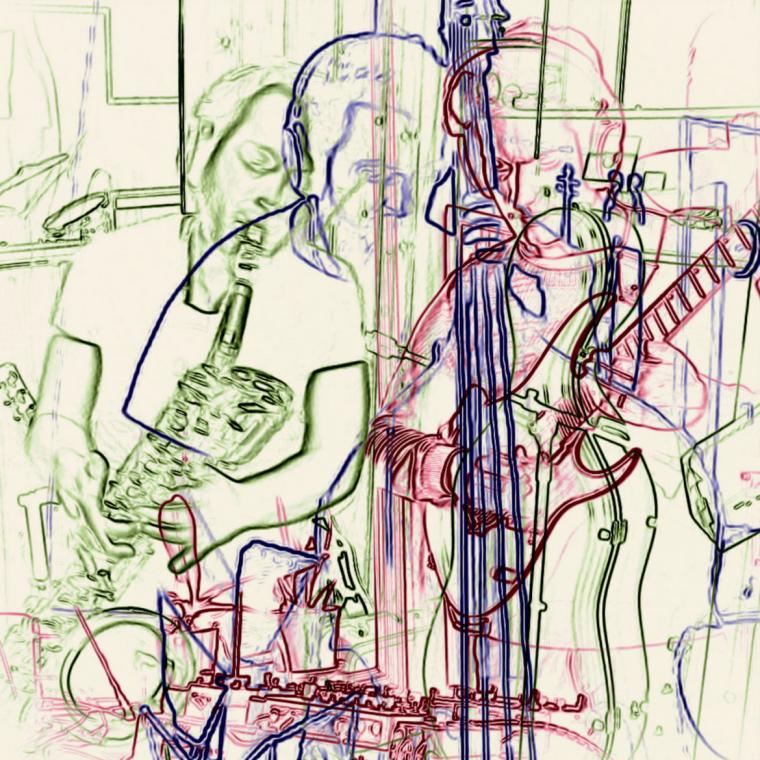 If the music of Iowa City-based trio Wombat is any indication, Iowa City must have a thriving free-improvisation scene that I had no idea existed. It seems unlikely that these three musicians – Justin K. Comer on saxophone and objects, Carlos Cotallo Solares on guitar and electronics, and Will Yager on double bass and objects – could have developed the sonic language they explore on their new album Befriend the Giant without taking part of a wider scene of mentors and collaborators, as distinctive talents such as theirs rarely just pop out of thin air.

But then again, even an ensemble of three dedicated people could constitute a scene of their own, an isolated island of skronk and electroacoustic noise occulted in a far-flung corner within an ocean of ... whatever else is popular these days. (Hyperpop? Is EDM still happening? Do the kids still play rock music?) I’m tossing out hypotheticals about the extent to which Iowa City has a free-improvisation scene here because Wombat’s music makes the case that these dudes are longtime pros at what they do – wailing saxophone solos, jittering atonal guitar lines fed through electronics, thunderous upright bass bombs – and they definitely have established a rapport together that becomes clear over the course of the dynamic narrative development of their extended improvised sessions.

What makes a “successful” freely improvised live performance in a small ensemble? There are as many answers as there are people who play freely improvised music. Really, the ideas of success or failure are antithetical to the practice – it’s more a question of knowing what you want to convey and seeing whether you are able to convey it. Derek Bailey would’ve probably told you that one of his sets conveyed what he wanted to convey if it shattered expectations of what an instrument is capable of, as he made his guitar sound like a cackling animal or a pile of wooden sticks falling down the stairs. At times, Milford Graves might’ve wanted to convey a sense of abandon and absolutely unfettered expression, as his extended 20-minute-plus solos of roiling, bombastic drum rolls and shouted chants left his audiences dumbfounded and enlightened. At times, there is no goal to convey anything, and a narrative or a mission statement arises simply out of the players taking chances, discovering sounds on the spot, and listening to each other. Over the course of Befriend the Giant, Wombat gets into all of these modes of expression.

They upend expectations of what their instruments should sound like: Solares’ guitar melts into abstract mush and jitters like a brittle branch flapping in the wind; Yager’s bass can thump with low end power, or he can scratch and bow at it to create piercing whistle tones and bursts of pure texture; Comer’s saxophone, at times, sounds like a distant foghorn, or a moaning creature, or a leaf spiraling on its way from a tree branch down to the ground. The confusion of who is playing what at any moment, especially with the inclusion of unknown objects that each band member plays as percussion at times, adds a lovely sense of bewilderment and awe to the proceedings. We wonder “Is that something he’s doing with the bass?” and we never get an answer, unless we’re watching them play before our eyes. The presence of Solares’ electronic tones, squeaking and bursting with static, provides a welcome contrast against the explicitly acoustic tones of the bass and saxophone, complicating the band’s stereo spread with a wider palette of alien tones. But then again, the bass and the saxophone don’t always necessarily sound like acoustic instruments in these contexts. Sometimes they prove to be just as electronic sounding, in terms of pure texture, as the squalling synth tones.

If you’re not into free jazz or freely improvised music (which is a bummer for you, to be honest), you might be wondering: Isn’t this all just noise? How is this a hard thing to do? Can’t they just do anything they want? (1) It is noise to some extent, but that’s not something to be derided. (2) Making art isn’t a contest to do something “hard” or “easy,” and no, playing this music the way that Wombat does is not easy. (3) Yes, they can do anything they want, and that’s part of the beauty of the whole thing, but free-improv sessions are just as much about listening and restraint than they are about pure chaos. Wombat do a great job of slowly sketching out a narrative within their sessions with the gradual introduction and escalation of individual voices, paying careful attention to the dynamics and levels of intensity of the session at any given moment.

Of course, there’s a place for absolute balls-to-the-wall squall mode in any session, those moments when everyone has reached 11 out of 10, and they’re just wailing as hard as possible at the climax that they’ve been patiently building toward. But to use a cliché that has been beaten to death but that remains true, the journey is much more important than the destination. The members of Wombat know when to sit out, not only to let their fellow band members shine for a moment, but to let a little silence take over the whole mix in general. They know when to switch up their tones and performance techniques to make sure one tactic doesn’t get too stale in the context of a single session – as when Solares tries on that spidery, reverb-heavy tone and starts playing something closer to legible consonant jazz guitar at the end of album closer “The Clockmaker’s Intentions.” All of these techniques amount to the most important thing: Their music is always surprising, never boring.

If you’ve never checked out free improv before, it’s hard to really imagine anything being a “good place to start,” but Befriend the Giant is at least one place to start, and it is good music. If you’re familiar with the catalogs of modern free-jazz-focused labels such as Astral Spirits (among the best labels currently operating in the U.S., for my money), Cuneiform Records, or Northern Spy/ESP-Disk, you will be deep into this album. Next time I’m in Iowa City, I hope to align it with one of their live sets, because I would love to see it all play out in front of my face.