Artist with “Clairvoyant” Works Has Drawings on Display at Monmouth College 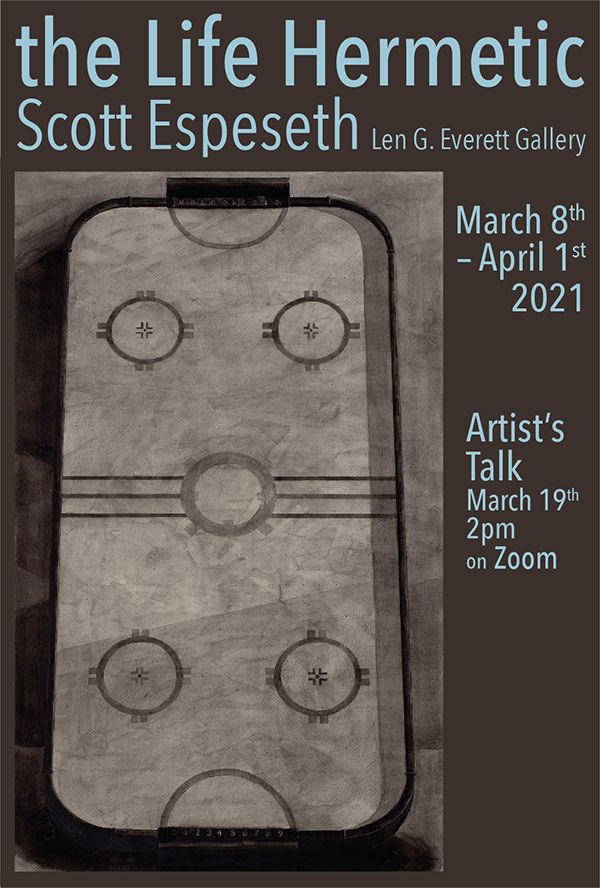 MONMOUTH, ILLINOIS (March 10, 2021) — A series of watercolor drawings by an artist whose works have been described as "clairvoyant" is on display in the Len G Everett Gallery of Monmouth College's Hewes Library.

The exhibition will be open through April 1, and Espeseth will give a public talk through Zoom at 2PM, March 19.

Espeseth, who has been teaching drawing and printmaking at Beloit since 2002, earned his Masters of fine arts in printmaking from the University of Wisconsin. His work has since evolved to focus on drawing, usually with commonplace media such as graphite pencils and ballpoint pen.

"My images are concerned with places and things that seem animated by a lurking consciousness," he wrote in his artist's statement. "This may merely be sensed in the atmosphere, or manifested explicitly via written messages or apparitions, implying that the membrane between two worlds has worn thin, and something is bleeding through."

His works are intended to have the air of clairvoyance.

"Mundane spaces take on a heightened reality, or a hallucinatory unreality," wrote Espeseth. "Through drawing, I immerse myself in this vision. The paper becomes like the screen of the mind's eye, in monochrome, as many of us dream. This may be a memory intruding upon the present, the future leaving messages for the past, or something rising from the subconscious. These moments of clarity reveal unease just below the surface, our own internal warnings and insights."

More of Espeseth's work can be seen at his website.