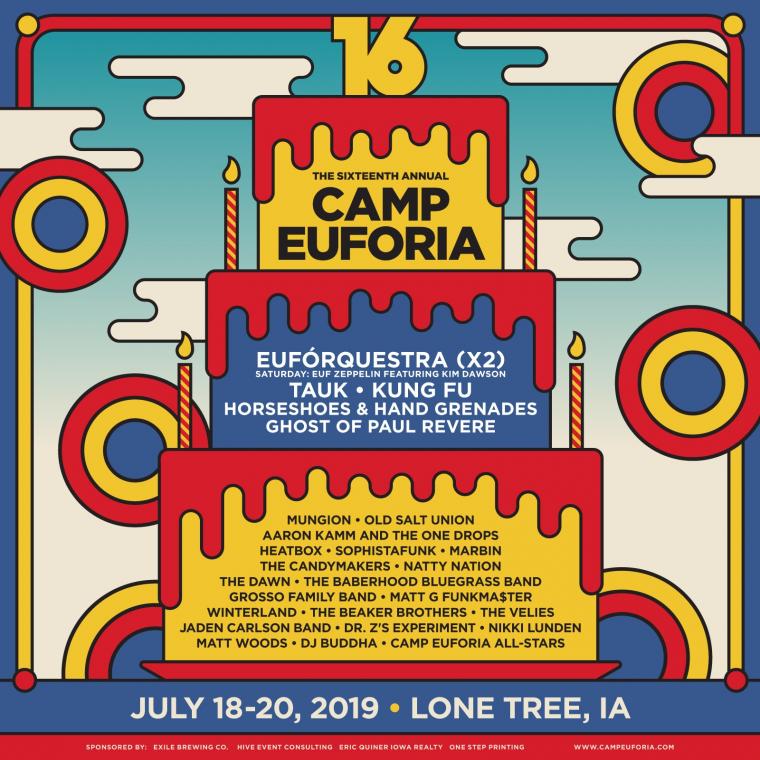 The 2019 installment of Camp Euforia will be held July 18 - 20 on the fan-beloved Jerry’s Farm in Lone Tree, Iowa. The Thursday pre-party on July 18 will include a special Camp Euforia All-Stars set flanked by area standout musicians. This year's festival will also include a special Led Zeppelin tribute set performed by Eufórquestra featuring Kim Dawson on vocals.

Each summer thousands of funk, jam, rock, and soul-music lovers flock to the land of local farm owner, Jerry Hotz, for a weekend full of euforic music, good vibes, and to make memories. Camp Euforia started in 2004 as Eufórquestra's "Fan Appreciation Party." Since then, it has grown in to a full-blown music festival featuring 20+ artists over three days on multiple stages.

“Camp Euforia’s history is special and being one of the longest running independent music festivals in the state of Iowa is something we take a lot of pride in,” says Eric Quiner, Executive Director of Camp Euforia and former member of Eufórquestra. “Surrounded three hundred and sixty degrees by farm fields that stretch to the horizon, this Iowa landscape features a unique and picturesque backdrop for the festival. Jerry’s Farm feels like home, and it’s been such a thrill to continue to reunite with fans to celebrate the band’s roots and showcase more homegrown Midwestern talent year after year.”

Eufórquestra's goal in creating Camp Euforia has always been a seamless gelling of community and music. With a focus on highlighting the eastern Iowa music scene, additional local acts will be joining the festival lineup after Battle of the Bands competitions take place on March 29 at Gabe’s in Iowa City, plus an additional date to be announced.

Advanced tickets for Camp Euforia will be released at 10 a.m. Central Time on Friday, February 22, beginning with special early bird pricing of $90 for a two-day festival pass and $110 to include the Thursday night pre-party. Following early bird pricing, all ticket prices increase. RV parking passes are available in advance for $70.

Eufórquestra (pronounced yoo-FOHR-keh-struh, think euphoria+orchestra) is energy and rhythm personified. An ever-evolving sound that has been influenced by music from all over the world with an emphasis on funk, pocket and groove. For over a decade the band has been igniting dance floors across the country, blending the roots of funk, soul, afrobeat, reggae and dub to create a sound that “explodes, dances and melts in your ear with sheer bliss” (Chris M. Slawecki; AllAboutJazz.com).