By Committee for a Responsible Federal Budget

The Congressional Budget Office (CBO) released, on March 30, its analysis of the President’s Fiscal Year (FY) 2021 budget using its own assumptions to evaluate the budget’s policies. Importantly, all of these estimates exclude the fiscal and economic effects of the novel coronavirus (COVID-19) outbreak and efforts to mitigate it.

CBO’s estimates show that debt and deficits under the President’s budget would rise over the next decade, rather than fall as the White House claims.

In this paper, we show:

While policymakers must focus all of their attention on the current economic and public health crisis, at some point they will need to turn their efforts to taming what will be a much higher federal debt. The President’s budget offers a number of thoughtful proposals to reduce health care costs and spend more efficiently. Unfortunately, it falls short of what is claimed and well short of what is needed to stabilize the national debt, let alone reduce it to more sustainable levels.

Debt, Deficits, Revenue, and Spending in the President’s Budget 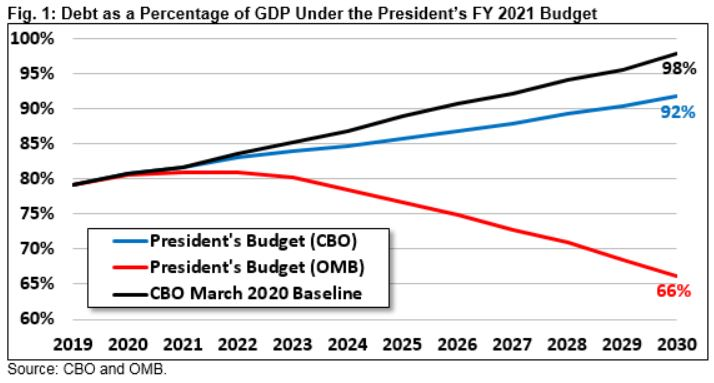 CBO finds that deficits would total $11 trillion (4 percent of GDP) between 2021 and 2030 under the President’s budget, which is $5.4 trillion higher than OMB’s projection but $2.1 trillion lower than current law.

Revenue reductions largely result from extending large parts of the Tax Cuts and Jobs Act beyond 2025 — which would be responsible for about $1.2 trillion in lost revenue. New tax credits for scholarship donations would lose another $50 billion of revenue. Other revenue measures, including stronger IRS tax enforcement, repeal of energy tax credits, and increased federal employee retirement contributions, would offset this reduction by raising almost $300 billion.

The Committee for a Responsible Federal Budget will publish a more complete analysis of the fiscal impact of policies in the President’s budget in the coming days.

Differences Between CBO’s and OMB’s Estimates

CBO estimates debt and deficits would be much higher under the President’s budget than OMB projects. CBO expects deficits would total $11.0 trillion over the next decade, which is $5.4 trillion higher than OMB’s estimate of $5.6 trillion. At the same time, debt in 2030 under CBO’s estimate would be much higher: 92 percent of GDP instead of 66 percent.

The bulk of the disconnect between CBO’s and OMB’s estimates stems from different economic assumptions. CBO projects real economic growth will average 1.7 percent over the next decade, which was in line with the projections of other forecasters prior to the COVID-19 outbreak. Meanwhile, OMB projects that real GDP will grow by an average of 2.9 percent, a projection far outside mainstream forecasts and which was highly unlikely to materialize on a sustained basis even before the current crisis. In reality, the economy is likely to contract in 2020, and long-term growth is highly uncertain but doubtful to approach the Administration’s estimates for any sustained period. 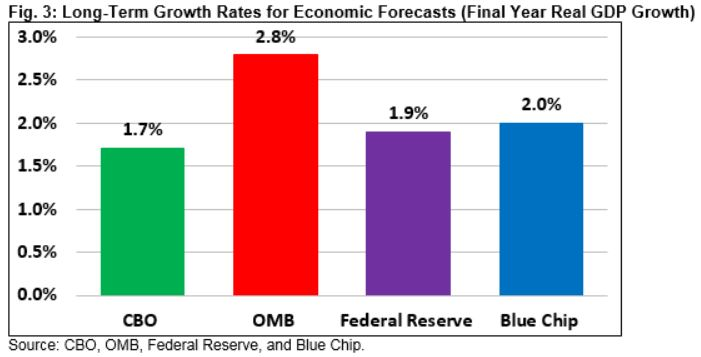 CBO’s more reasonable economic growth assumptions lead to a projection of $4.1 trillion less in revenue over a decade than OMB does, accounting for the bulk of the $5.4 trillion difference in projected deficits between the two estimators. CBO also projects primary spending would be more than $800 billion higher than OMB and interest costs would be more than $500 billion higher.

Both on the revenue and spending side, the vast majority of the difference between CBO and OMB is due to the economics in the underlying baseline projections. While CBO believes the President’s policies would save about $1.1 trillion less than OMB forecasts, it also projects that baseline deficits will be about $4.3 trillion higher. 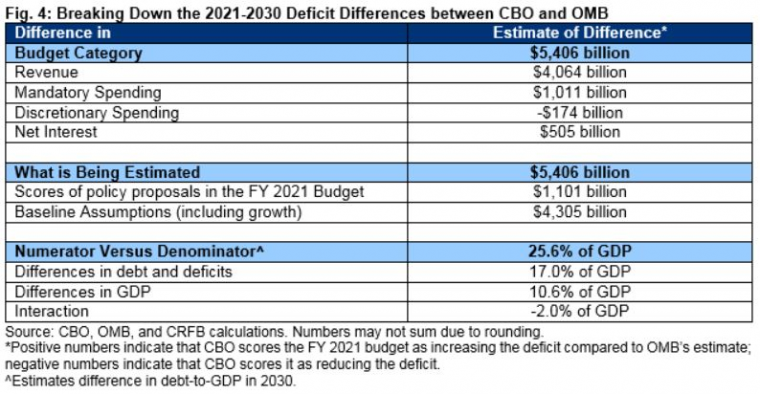 It is worth noting that focusing only on the $5.4 trillion difference in deficit projections understates the difference between CBO’s and OMB’s estimates since it focuses on nominal deficits rather than debt as a share of GDP. In total, debt-to-GDP is projected to be about 26 percentage points higher under CBO’s estimate. About three-fifths of the difference stems from higher projected debt levels, while the remaining two-fifths is attributable to lower GDP estimates.

CBO’s analysis shows that with realistic economic assumptions, debt under the President’s budget would rise as a share of the economy, not fall as the White House claims, and trillion-dollar annual deficits would only briefly disappear before returning indefinitely. Incorporating the effects of the COVID-19 outbreak on the economy and budget, debt will inevitably grow far higher. Nevertheless, the debt trajectory under the President’s budget would be an improvement over current law.

The President deserves credit for setting the goal of reducing debt as a share of GDP and putting forward a number of thoughtful policies to achieve that goal. Unfortunately, the budget relies on overly optimistic economic assumptions, unrealistic or unspecific policy assumptions, and other gimmicks to make the fiscal outlook seem brighter than it actually is.

As the U.S faces a sudden economic downturn in the wake of the COVID-19 pandemic, deficit reduction will not and should not be the primary focus of elected officials. But when we get through this crisis, reasonable and thoughtful approaches to reduce the national debt will be needed more than ever. Many of the policies in the President’s budget would represent a good starting point for addressing structural deficits and putting debt and deficits on a sustainable long-term path. However, more significant revenue increases and spending reductions will be needed.