"It appears that the devastating flooding that plagued so much of the state in March has not yet impacted our unemployment rates," said Director Beth Townsend, Iowa Workforce Development. "The next few months will be more telling as to the extent of the effect on the state’s unemployment rate. For now, our unemployment rate remains at a historically low level and the number of Iowans in the workforce continues to grow."

Iowa establishments took another step back in March (-2,700) following a decline in February. Businesses have been slow to hire thus far this year, with the last monthly job-increase occurring in December. This month’s loss pulls total nonfarm-employment down to 1,584,600 jobs. Heavy flooding plagued many of the rural parts of the western border during middle and late parts of the month; however, establishments haven’t reflected much loss so far in the estimates. This could be attributed to several factors, such as workers continuing to get paid for things like clean-up during the flooding, the timing of the flood and it missing the reference-point, and the fact that it is was generally within rural areas, which may not have been represented in sample. April may be a better indicator of how much impact the flood had on employment.

Trade, transportation, and utilities combined for 1,800 jobs lost in March. Transportation and warehousing was particularly weak (-1,100). This marks the second consecutive loss for this sector. Manufacturing also pared jobs twice in the last two months, shedding 1,000 jobs mainly within durable-goods factories. Construction got off to a slow start in March (-800) and has generally trended down over the past several months. On the other hand, there were some bright spots within total nonfarm employment. Health-care and social assistance added 1,100 jobs after showing little growth over the past several months. Leisure and hospitality advanced in March (+1,000) following a sharp decline in February.

Given the recent sluggishness within establishments, total nonfarm is now up just 3,900 jobs versus one year ago. Manufacturing continues to fuel much of the annual gain by a wide margin (+7,200). Leisure and hospitality and professional and business services tie for a distant second (+1,200). Conversely, the trade, transportation, and utilities super-sector continues to lead all losses with 2,100 jobs pared. Construction is also down following recent sluggishness (-1,700). Exactly five private super sectors are now down annually versus five that are up from one year ago. 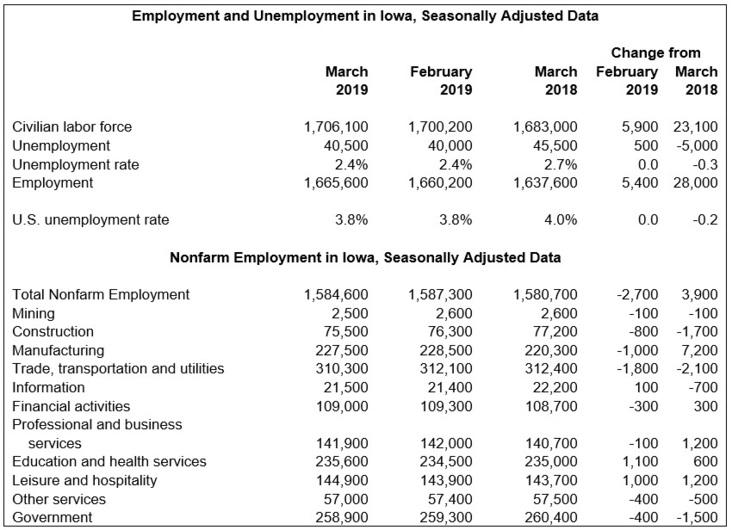