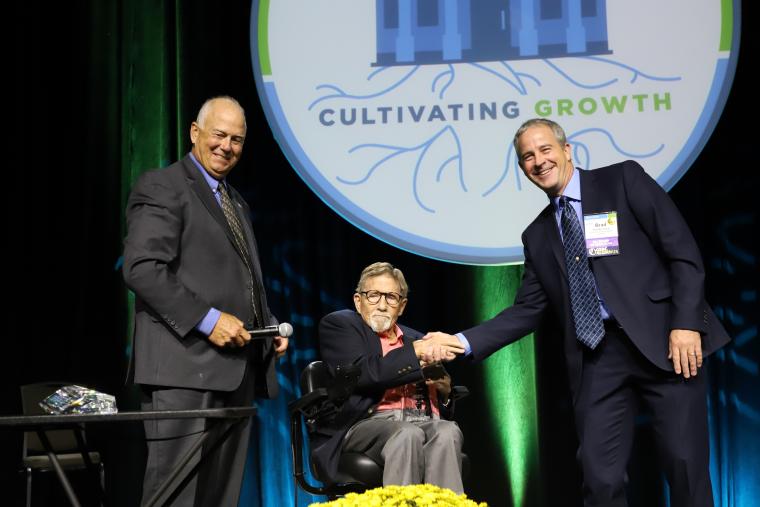 “Neal and Dwight are part of a quintessential American story, starting from humble beginnings and succeeding through hard work and a desire to support the communities they serve,” said John Sorensen, president and CEO of the Iowa Bankers Association. “For more than four decades, they have operated under the motto — leave it better than you found it. In turn, their bank team members, customers, and communities have thrived.”

The IBA created the award in Congressman Leach’s name in 2000, following his term as chairman of the US House Banking Committee. The annual James A Leach Leadership Award recognizes a distinguished Iowa banker who, like Representative Leach, has made significant, lifelong contributions to how Iowa banks serve Iowa communities.

“Neal and Dwight are so deserving of the James A Leach Leadership Award. Their lifelong commitment and legacy that they are leaving on this industry is unprecedented,” said Greg Post, CEO of Northwest Financial Corp. “They are genuinely caring men who truly believe that if they have the resources to help the communities they serve, it is important that they support their communities to thrive and grow.”

Born in Holstein, the Conovers lived and worked on their family’s farm where their father instilled in them the motto — “leave it better than you found it.” It’s a value the Conovers have lived by throughout their banking careers.

Neal and Dwight followed similar paths — both attended Iowa State University and graduated in 1969 and 1975, respectively. They then began their banking careers as ag bankers with Brenton Banks, and it didn’t take long for them to advance to leadership positions. By the late 1970s and early 1980s, they both had become presidents at Iowa banks.

In 1984, Dwight purchased First National Bank of Creston, and Neal later joined him as a partner in 1985. In late 1988, Neal and Dwight acquired Northwest Federal Savings Bank (in Spirit Lake, Lake Park, and Estherville) and Home Federal Savings Bank (in Spencer, Algona, and Humboldt). With these first acquisitions, and the others that would follow, the Conovers stayed committed to their father’s ingrained value of “leaving it better than they found it.”

The brothers have taken Northwest Financial Corp from one bank with 32 employees and $48 million in assets to a company with 23 locations, 412 employees, and $2.69 billion in assets. This year, Northwest Financial Corp was recognized as a 2022 Top Workplace in the USA, and it received Top Workplace in Iowa honors from 2015-2021.

Neal and Dwight have been heavily involved in their communities and the banking industry throughout their careers, participating in numerous speaking engagements, initiatives, committees, and leadership roles.

Dwight served on the Iowa Department of Rural Economic Development and is a founding member of the Iowa Mediation Board; a director of the IBA board and chairman in 2002-2003; a director of Iowa State University's Board of Governor's Extension Board and awarded the Floyd Andres Award for College of Ag in 2021; founding director/treasurer of the South Central Iowa Community Foundation; president of the SWWC Education Foundation, Crestland Betterment Foundation, Creston Chamber of Commerce, and Union County Development Company; chairman of the Okoboji Foundation; and a member of the Masons, Elks, Rotary and Leadership Iowa.

“Both brothers have been involved in so many committees, boards and initiatives their impact is truly immeasurable,” Post said. “Neal and Dwight have a passion for serving customers, helping their communities prosper, and taking care of their employees. There are many things that go on behind the scenes that people do not see, but you cannot have a profitable company and 400 employees and not do something right.”