"The drop in December's unemployment rate, as well as the increase of an additional 22,800 Iowans finding work, is a good sign for Iowa's economic recovery," said Director Beth Townsend, Iowa Workforce Development. "November through February are typically the months IWD sees the most unemployment claims due to seasonal layoffs. The fact that so many people found jobs during this time is evidence that our economy remains strong and our recovery from the pandemic is on the right track. There are over 64,000 jobs posted at IowaWORKS.gov and I encourage everyone who can, to rejoin the workforce and take advantage of the great opportunities available in Iowa right now." 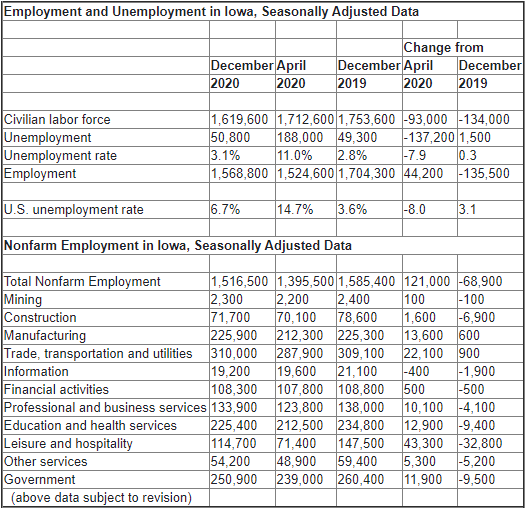 In December, Iowa establishments added 9,700 jobs, easily offsetting the loss of 6,900 jobs in November. Private industries were responsible for all of the growth to finish the year and were fueled by a large increase in retail trade which had a sluggish start in November with very little seasonal hiring. Whereas private industries have been steadily hiring, government has been slowing in recent months with job losses in each of the last three months. These drops have been concentrated in local government and have generally been related to education.

Retail led all sectors with 5,400 jobs added in December. This was encouraging news given that November showed little movement as the holiday season started. Much of the hiring was in general merchandise and food and beverage stores. Manufacturing ended the year on a positive note with 3,800 jobs gained in December. Durable goods factories showed the most promise (+2,200). Some of this increase stemmed from hiring in agricultural and construction machinery shops. Unlike other sectors, construction has been slow to recover this year, but did end the year on a positive note (+1,500). Professional and business services also gained 1,500 and were bolstered by administrative support and waste management services. Job losses in December were generally limited to leisure and hospitality (-3,700). This sector trended down 2,100 jobs within arts, entertainment, and recreation alone as winter weather, coupled with social-distancing, led to layoffs in each of the last two months.

With this month’s gain, Iowa has now added 121,000 jobs since the April low. Leisure and hospitality gained the most jobs (+43,300), though there is still some work to do to get back to pre-COVID levels. Retail trade ended the year on a very positive note and has added 23,200 jobs. This sector has already eclipsed last year’s mark. Other sectors faring well are manufacturing (+13,600) and education and health-care (+12,900). Those sectors showing little to no growth since April include information, financial activities, and construction.

The total number of initial claims increased in December by 13,269 (51.7 percent) versus November and have fallen 118,406 (-75.3 percent) versus the peak of 157,324 eight months ago. For continued claims, most statistics have been reduced to approximately 75 percent of the April levels. The number of claimants increased by 45.4 percent from last year and are down 138,671 over the prior eight months. The weeks paid increased to 155,078 in December, less than 25 percent of the 652,623 paid in April, while the total amount paid to claimants increased to $57.0 million, less than 30 percent of the $213.5 million paid eight months ago.

MEDIA ALERT: Local data for December 2020 is available on the IWD website. Statewide and local data for January 2021 will be released on Monday, March 15, 2021.