“September is the fifth consecutive month we have seen a drop in unemployment since the beginning of the pandemic and peak unemployment in April,” said Director Beth Townsend, Iowa Workforce Development. “We have over 64,000 job openings across the state. Additionally, we have awarded over $10 million in grants focused on helping those whose jobs have been affected get back into the workplace by completing short term training or starting a registered apprenticeship program. Details available at www.FutureReadyIowa.gov."

Total non-farm employment advanced by 7,300 jobs in September, lifting the total number of jobs to 1,499,500. The gain this month is the fifth-consecutive since April and more than expected following a much-smaller increase of 4,500 in August. Service industries took another step towards recovery this month with gains in leisure and hospitality along with retail. Goods-producing industries showed little overall movement with sluggishness in construction offsetting hiring in manufacturing industries. Government added 2,400 jobs due to local-government education ramping-up as students return to in-person classes. This monthly increase leaves government down just 2.3 percent versus last year. Total non-farm employment overall is down 5.4 percent compared to one year ago.

Leisure and hospitality gained the most jobs in September (+4,100) and was predominantly filled by eating and drinking establishments. The gain was an improvement over the much smaller increase of 1,400 in August. Manufacturing added jobs for the fifth-consecutive month (+2,100) with hiring nearly even between durable and non-durable goods factories. Trade and transportation advanced by 1,600 due mostly to hiring in retail trade (+1,000). The increase was a nice recovery following a loss of 1,100 in August. Job losses in September were led by construction which shed 2,500 jobs and has only increased once in the last eight months. The only other significant loss was within professional and business services (-500). The loss this month was fueled by layoffs in administrative support and waste management services.

Over the past five months, 104,000 jobs have been added back by Iowa businesses, equating to a gain of 7.5 percent in total non-farm employment. Leisure and hospitality still has some ground to make up, but has added the most jobs during that span (+47,200 or 66.1 percent). Government has gained 16,100 jobs due mostly to schools returning to in-person classes. Retail trade has been able to adapt and recover, particularly within grocery and general merchandise establishments and has added 15,600 jobs over the past five months. While most sectors have added jobs since April, those sectors not faring as well are construction (-3,500) and transportation and warehousing (-1,000).

The total number of initial claims trended down in September by 503 (-2.2 percent) versus August and have now fallen 134,410 (-85 percent) versus the peak of 157,300 five months ago. For continued claims, most statistics have been reduced to approximately 40 percent of the April levels. The number of claimants dropped by 23.1 percent from last month and are down 109,921 over the prior five months. The weeks paid dropped to 257,231 in September, less than half of the 652,623 paid in April, while the total amount paid to claimants fell to $84.5 million, less than half of the $213.5 million paid five months ago. 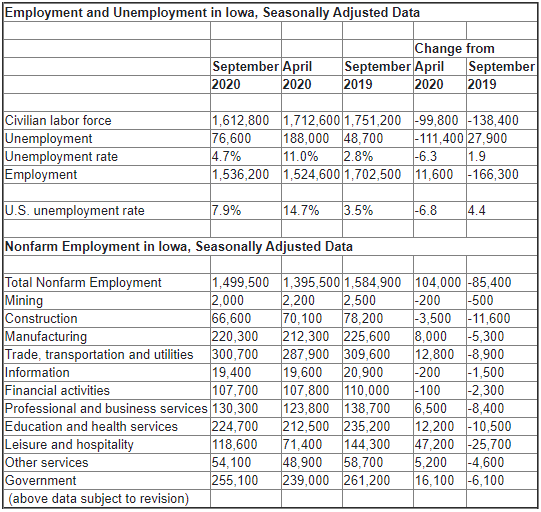