Iowa’s seasonally adjusted unemployment rate remains unchanged from the revised December rate of 2.8 percent. The state’s jobless rate was 2.7 percent one year ago. The U.S. unemployment rate increased slightly to 3.6 percent in January.

Iowa Workforce Development Director Beth Townsend said, “Although the unemployment rate has gone up slightly over the winter months, there are still employers looking for skilled workers in high-demand fields. Iowans can connect with these job opportunities through our online employment resource www.IowaWORKS.gov or by meeting with a workforce advisor at one of our IowaWORKS centers across the state.”

Monthly labor force data have been revised for 2015-2019 as required by the U.S. Department of Labor, Bureau of Labor Statistics.  Benchmarking is the process of re-estimating statistics as more complete data becomes available.  Prior year’s estimates for the Current Employment Statistics (CES) and Local Area Unemployment Statistics (LAUS) programs are benchmarked annually.  In March, the revised data is incorporated with the January employment statistics.

Iowa establishments again trended down in January, paring 900 jobs from payrolls. This monthly loss was the third consecutive for the state and leaves total nonfarm employment at 1,584,500 jobs. Private industries shed 1,800 to start the year with service industries dropping by 3,100 jobs in the last three months. Goods producing industries were unchanged versus last month and government added 900 jobs in January. Overall, government has added 1,300 jobs versus one year ago while private industries are down 7,700 jobs over the last twelve months.

Construction began this year with 800 jobs added to lead all sectors. This is the second straight month this sector added jobs. The only other major increase this month occurred in financial activities (+500). This super sector benefitted from usual hiring to begin the year in credit intermediation and related activities. Alternatively, manufacturing again trimmed payrolls this month (-800). This is the third consecutive loss for this super sector. Nondurable goods shops were responsible for all the decline this month as durable goods factories gained 100 jobs. Trade, transportation, and utilities also lost 800 jobs fueled by a large drop in transportation and warehousing (-900). Smaller declines this month include leisure and hospitality (-600), professional and business services (-500), education and health services (-400), and information (-400).

Annually, Iowa total nonfarm employment is down 6,400 jobs (-0.4 percent). Trade, transportation, and utilities has been responsible for much of the decline (-4,800). Retail trade alone has steadily trended down and trails last January by 2,700 jobs. Professional and business services have shed jobs over the past three months and fell behind last year’s mark by 2,500 jobs. Manufacturing was responsible for much of the growth over the past two years, but in the wake of losses stretching back to July of 2019 this super sector now trails last year’s mark by 1,300 jobs. Durable goods shops have fared worse during that time, shedding 2,300 jobs alone; nondurable goods factories gained 1,000 jobs thanks to growth within food manufacturing. 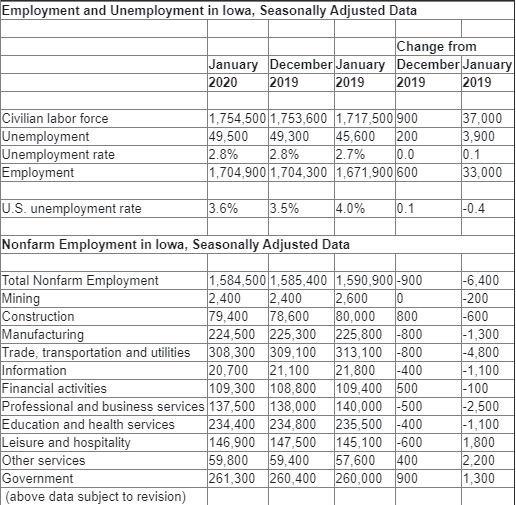