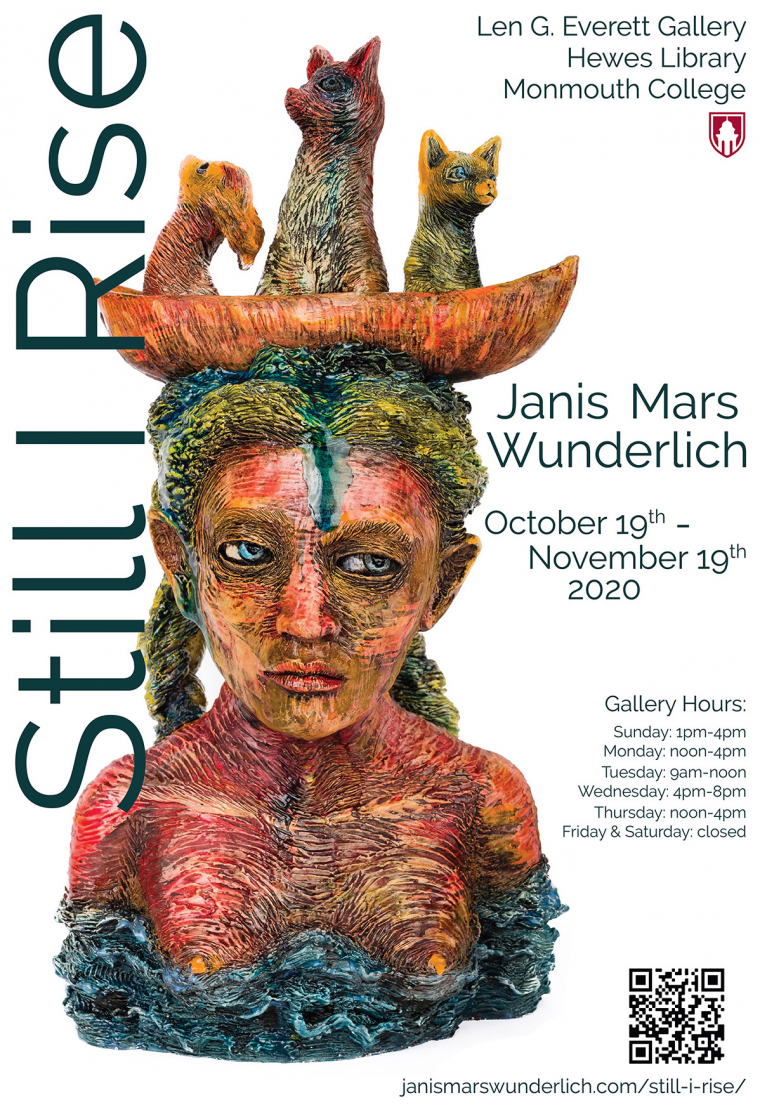 MONMOUTH, ILLINOIS (October 21, 2020) — When Monmouth College art professor Janis Wunderlich won Best of Show for a ceramic piece at a national juried exhibition last fall, she said the piece depicted "a way to rise above."

Now, a year later, she has built an entire exhibit around that theme. Still, I Rise opened October 19 at the College's Len G Everett Gallery in Hewes Library, and it will be on display through November 19.

"I am a storyteller, creating visual narratives inspired by daily interactions with the people, creatures, and complexities in my world," said Wunderlich, who joined Monmouth's faculty in 2017 and earlier this year received a prestigious 2020 Artist Fellowship Award from the Illinois Arts Council Agency. "I combine animal and human forms to suggest universal or archetypal connections. Life is full of duality — joy and conflict — and I am in awe of our inherent tendency towards resilience. Despite failure, we rise and overcome difficult or oppressive circumstances."

That duality was present in her winning work from a year ago, titled Vulnerabilities, which is part of the exhibit.

"There's joy and sadness in that piece," she said. "It's wonderful and difficult at the same time ... the beauty and the struggle."

She also spoke of the difficulty in creating it — it blew apart during the firing process — and the simultaneous difficulty in her life.

In the months since its creation, difficult times have followed for the entire world.

"There are many among us who have been historically undervalued or marginalized by socially-constructed biases related to gender, race, body image, and economic status," said Wunderlich. "This year a global pandemic, extreme political division, racial tension, and environmental disasters have set up a precarious and oppressive landscape."

The title of her exhibit comes from the Maya Angelou poem "Still I Rise," which includes the lines: "Out of the huts of history's shame/I rise/Up from a past that's rooted in pain/I rise."

Said Wunderlich: "My art tells stories which acknowledge the struggles and burdens of human vulnerability, as well as the strength and resiliency born from human kindness and connection. Nurturing bonds and intimate relationships create buoyancy, allowing us to rise above the ashes, overcoming obstacles as we float boldly toward a better future."

Photographs of the exhibit may be viewed online at Wunderlich's website.

Because of the pandemic, no public events or receptions will be held this year for exhibits in the Everett Gallery. Following College policies, individuals visiting the gallery must wear masks, practice social-distancing, and refrain from touching doorways and walls.